Hammers Promoted: Is this the end of the road for Orient?

On the weekend where West Ham sealed promotion back to the Premier League at the first attempt, I am looking at the future of Leyton Orient. West Ham are the closest club to Orient and it has be known that they have a similar fan base.  When Orient play at home and West Ham play away, fans will come and support Orient and vice versa. The West Ham result comes just 5 days after the bidding for the Olympic Stadium was extended.

Orient have already submitted complaints about the tenancy of the Olympic stadium and fear for the survival of the club if West Hame move in.  Barry Hearn has already stated that ‘A club that has a 30,000-35,000 support base is moving into an 80,000-seater stadium. It obviously means very cheap tickets and it means a death knell for Leyton Orient, the Football League’s second oldest club’. The fact of the matter is that local children and people of the area would rather watch Premier League football than League one football if the price of the tickets are the same. It doesn’t take a genius to work that out, it is obvious that if West Ham move in, Orient will find it harder and harder to attract the new generation of supporters.

One of the main points that Barry Hearn was making about the Hammers moving into the Olympic stadium was the ‘Football League Rules’ where it states that ‘In considering whether to give any such consent, the Board shall have regard to all the circumstances of the case and shall not consent unless reasonably satisfied that such consent: , would not adversely affect Clubs (or Football League clubs) having their registered grounds in the immediate vicinity of the proposed location’. Anybody that lives or evens knows Leyton, realizes that the Olympic Stadium can be seen clearly from the ground and the tube station therefore meaning that if anybody moved into the stadium it would directly affect Leyton Orient Football Club. At the fact of the matter now is that as West Ham have been promoted, they know no longer fit into ‘Football League Rules’ and are now following ‘Premier League Rules’.

Now that the bidding process has been extended by 2 months, this maybe taking into account the legal battle from Orient. The bidding process was extended last week prior to West Ham getting promoted which could lead them to use the case of West Ham no longer are part of the Football League and are part of the Premier League where the rules are different. As soon as West Ham won the Championship Play Off Final, my twitter page was overloaded with Orient fans writing, ‘What does this do for Leyton Orient’ and ‘Is this the beginning of the end’. I agree to a certain extent, a lot of people will be saying ‘West Ham have their fans and Orient have theirs, Your fan base is a lot smaller than theirs’. That is a fact which is proven by the average home attendances but that is not my point. The point is that if cheap tickets are being sold to watch Premier League Football, ‘The best division in the world’ what would cause people to say no to that and watch League 1 football instead.

On match days around Brisbane Road, it is clear to see that there are not many younger fans going to watch football, yes you have the small children up to the age of 5-6, then there is a gap to roughly 16-18. But then the average age group must be 30-50. The only way youngsters will begin to watch Orient play is if their Dad takes them there which is exactly what my Dad did. My dad explained that when he started to watch football in the mid 60’s there was a lot of youngsters watching the game, nowadays they have continued but due to the success of the Premier League, less and less youngsters are watching Football League football. I am grateful that my Dad took my to watch football at a younger age, it helped me to understand that there is more than one league in the country. These players actually want to play football and most are not here for the money. 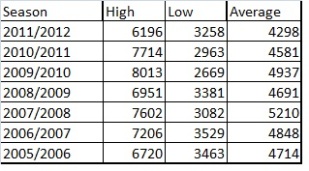 Above are the attendance figures from the last 7 seasons, as you can see the average attendances for this season is the lowest in the last 7 years. This could be down to the recession present within the country and the fact people need to spend their money more wisely, on food and living rather than football matches. It could also be that League 1 went through a stage where there were big teams in the division who would bring large away support helping Orient’s attendances. In the last couple of season we have lost the likes of: Millwall, Southampton, Norwich, Leeds, Charlton, Sheffield Wednesday, Brighton, Leicester, Peterborough and Nottingham Forest. These teams would be bring a substantial away support and in every season we have lost at least two of these teams which affects our support. In this current season we are going to lose Huddersfield or Sheffield United as well meaning that we will not have many teams that will bring a big away following.

I feel that as West Ham have got promoted is a bad thing no matter what people will say, now that West Ham have moved from Football League Rules to Premier League Rules leaves Orient with a problem. It seems like Barry Hearn’s point may have been lost, the distance between Orient and the Olympic Park is very very close. Like I said before if you come out of the tube station you can see the Olympic Stadium. Well if you want to see the view from your seat then you can, this is not how you watch football.

Will Hammers getting promoted be the end of Orient? We will have to wait and see what happens

1 Response to Hammers Promoted: Is this the end of the road for Orient?