“Feet are Fully on the Ground”

Leyton Orient manager Ian Hendon insists his side’s “feet are fully on the ground” despite going top of League 2 last night. Speaking to Leytonorient.com after the victory Hendon stated “It is a 46 game season but we are delighted with the result”. Three wins out of three in the league puts Hendon’s side top on goal difference after their 3-0 victory last night. Hendon went head to head with his ex colleague Teddy Sheringham who both left West Ham in the summer to take up managerial roles.

However it was Hendon who came out on top but Stevenage did give Orient a scare in the first half with both Brett Williams and Diko Akinyemi striking the woodwork. Paul McCallum had a header cleared off the line but Sheringham would have be disappointed his side didn’t take the lead. Hendon brought on Blair Turgott in the second half and his introduction gave the home side the impetus to go on and win. Jay Simpson nodded the opener with 16 minutes to go before Turgott volleyed in a fine team move for the O’s. Ollie Palmer wrapped up victory in added time punishing a mistake from Dean Wells.

Both sides named unchanged sides from their weekend’s results with Hendon continuing with a 4-4-2 diamond while Sheringham adopted a 4-1-3-2 with captain Steven Schumacher playing just in front of the back 4. 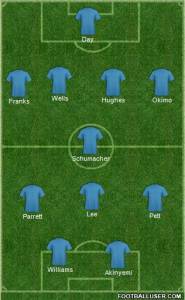 Boro started the brightest with Williams and Akinyemi winning lots of aerial ball for the away side. Bradley Pritchard blazed over for Orient before a mistake at the back nearly saw them fall behind. Loose play in the midfield saw the ball flicked to Brett Williams, his turn and shot hit Alex Ciask’s post and bounced off the keeper for a corner. Both sides were trying to play football going forward but mistakes were at a premium with possession changing hands quickly.

Mysteriously for many Orient fans, Sheringham and his side appeared to give Clohessy the freedom of Leyton down the right flank but unlike his usual standards his crossing failed to live up to expectations. It was down the right where Cox screwed a shot wide after 17 minutes, Clohessy’s cross was cleared to Pritchard on the edge of the box. His first time touch put Cox in but his first time shot was scuffed wide.

Orient were finding Clohessy with ease down the right and he was the out ball for the hosts every time they were in possession. Stevenage’s aerial prowess continued and they looked very dangerous from set pieces. With Orient playing a diamond in midfield, Stevenage at times were winning too much second ball preventing Orient from going forward. Charlie Lee was pushed on to Lloyd James preventing the Orient man from picking his passes.

The home side could have led after 28 minutes and on second viewing it appeared they should have. Once again a move down the right saw a beautiful ball from Clohessy to the back post where McCallum rose highest to head past Chris Day but his goal bound header was cleared. The former West Ham striker was convinced he had notched his third of the campaign but his celebrations were cut short by referee  Chris Sarginson. On second viewing it appeared the ball had indeed crossed the line.

Stevenage still posed a threat and goal scorer from the weekend, Akinyemi, was very lively in attack and it was the 18 year old who was whiskers away from opening the scoring. Brett Williams flicked on to the youngster, he turned Baudry inside out and his fierce shot bounced off the underside of the bar and away to safety. This seemed to kick Orient into gear which saw Cox and Clohessy combine 2 minutes later but Jay Simpson’s shot was brilliantly blocked by Wells for a corner.

There were chances for both sides but Stevenage would feel unlucky not to have led at the break. The second half continued in the same vein as the first, Sammy Moore blazed over after Fraser Shaw had broke well down the left. Stevenage were still pressing forward and Williams saw his left foot shot brilliantly saved by Ciask in the Orient goal.

Hendon changed tactics with an hour gone, Blair Turgott replaced Lloyd James with Orient reverting to a traditional 4-4-2 with Turgott and Cox on each wing and Pricthard partnering Moore in central midfield. The substitute didn’t take long to make an impact as his right wing cross was headed over by McCallum.

With the change of system from Hendon, Sheringham reacted almost immediately matching his former colleagues formation from a 4-1-3-2 to a 4-4-2 as Tom Conlon replaced Charlie Lee. Conlon had a glorious chance 3 minutes after his introduction but screwed his shot wide of the mark.

Orient were having more joy with genuine width in attack, Jay Simpson was then thwarted by the woodwork. Clohessy crossed to the frontman who did brilliantly to create space onto his left foot but his shot cannoned off the woodwork.  But with 16 minutes remaining Simpson made the breakthrough. Cox who had moved to left, picked the ball up crossing to Simpson who glanced home inside the far post to put the hosts ahead. Relief was for all to see at Brisbane Road with home side restricted to minimal openings.

Hendon introduced Palmer and Dunne for McCallum and Cox as Orient looked to protect their advantage. Despite the change, Orient doubled their advantage through Turgott with 5 minutes left and you find it hard to find a better team goal in League 2 this season. Following a Boro corner, Palmer robbed a Stevenage player in the left channel, he picked out Sammy Moore who had broke forward. Moore looked and turned inside picking out Clohessy on the right edge of the penalty area. His cushioned first time ball was directed delightfully into the path of the onrushing Turgott who volleyed home.

A fine team goal highlighting the togetherness of the squad currently. Palmer wrapped up victory in added time as he chased down a ball played forward. Dean Wells under pressure from Palmer headed poorly back to Chris Day leaving Palmer to nip in and slot home Orient’s third. A harsh reflection on the full 90 minutes with Stevenage playing their part in the game.

On another day Orient may have been behind at the break as Stevenage had chances to make the breakthrough. Sheringham looked down beat post match and rightfully so but Hendon’s managerial nouse shined through once more for the hosts. His change of formation had the desired effect with Turgott having a real impact on proceedings after his introduction. Cox once again assisted Simpson’s opener but even on a frustrating evening for the winger, he still popped up with an assist.

That 2nd goal can be watched over and over again, the pass from Moore, the ball from Clohessy and the finish from Turgott, all superb. I myself struggle to have seen a better team goal at Brisbane Road (I wasn’t at the Gillingham game 13/14 season 5-1 win).

Essam continues to thrive in defense despite Baudry not looking completely match fit last night. Moore and Pritchard are still impressing with Moore relishing more of a role in the 4-4-2 system after James’s withdrawal. It was great to see Turgott and Palmer have the impact that they have been showing in their performances with the goals doing the world of good for their confidence.

It was definitely a tough test for Orient with Hendon revealing to leytonorient.com that “Stevenage were the best team we have faced this season, it was a tough tough game, in the second half we played a little better and we are delighted”. The key move for O’s fans was that Hendon saw the tactical change that needed to happen and was brave enough to make the change which had the desired effect.

Newport away awaits on Saturday, the 11:45 from Paddington is waiting, let’s see if another country means another win for Ian Hendon’s Red White Army….