How do you like it? How do you like it? Well I think everybody loved Sammy Moore’s wonderful second goal which wrapped up Leyton Orient’s first victory in 6 league matches. Moore who has been a constant in the O’s side seen his summer move from Wimbledon set the O’s on their way after 16 minutes, volleying home a Bradley Pritchard through ball.

County struggled to attack in the first half but the introduction of Izale McCleod and Adam Campbell had the desired effect straight after the restart with Campbell setting up Jon Stead to slot home. County were the better side with Alex Ciask preventing Campbell putting them ahead. Orient rallied as the game reached the final 11 minutes and pushed ahead when Jay Simpson tapped in after Sean Clohessy’s shot was parried by Scott Loach. But it was Sammy Moore who rounded off the victory in style with a stunning 30 yard strike to move Orient back to third.

Ian Hendon made 1 change to the side that lost 2-1 to Carlisle on Tuesday night with new loan signing Adam Chicksen coming in for Frazer Shaw, who dropped to the bench. A surprise was the inclusion of Alex Cisak who looked set to miss the game but was given permission to play by Austraila.

Notts County who drew away at Dagenham 1-1 on Tuesday night made 9 changes to their side with only midfielder Alan Smith and defender Alan Sheehan the only men to keep their places. 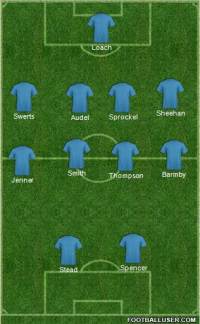 County who took 7 points from the previous 3 games started bright with Civard Sprockel heading wide from a corner.

With County looking to attack, the game was fairly open in the early exchanges. Orient had a handball appeal waved away by referee, Darren England.

The O’s had dominated recent matches and were growing into the game with Loach saving well to his right from a Sammy Moore volley. Good interchange down the right saw Ollie Palmer lay off to Sean Clohessy who crossed for Moore but Loach was up to the task. Mathieu Baudry headed wide from the resulting corner, however Orient continued to look dangerous from set plays. The home side scored from a corner against Carlisle and had another penalty appeal waved away when Baudry’s header fell to Connor Essam at the abck post. Essam appeared to be held but Darren England was not interested.

Ian Hendon’s side continued to press for the opening goal and were rewarded after 16 minutes, a period of possession saw the ball fall to Bradley Pritchard. Pritchard’s through ball went over the County defence, Moore latched on to the ball and volleyed beyond Loach to open the scoring. Only the fifth goal Orient have scored in the first half of matches and the first time they have scored first since 29th August.

County looked poor in attacking areas, showing the amount of changes that manager Ricardo Moniz made to his side. After a promising start, the tempo of the game dropped with the home side taking more touches on the ball but Dean Cox did drill a shot wide of the mark. Both Baudry and Hendon had asked for ruthlessness in front of goal from their side and they really should have doubled their lead just before the half hour. Sean Clohessy’s cross was headed by Gill Swerts into the path of Jay Simpson but Orient’s top scorer saw his point blank header saved by Loach. A big chance for Orient who had failed to take their chances in recent weeks, would they be made to pay?

The O’s continued to link well in spells with Palmer winning more aerial balls than in recent weeks. New loan signing Adam Chicksen was solid at left back while Jack Payne was constant in the center of midfield. County had little threat going forward but showed one glimpse when Jimmy Spencer turned Sean Clohessy on the edge of the box but saw his effort go across the face of the goal. Alan Sheehan had to be replaced by Adam Campbell who was on the substitute bench even after scoring on Tuesday night.

County replaced Jimmy Spencer at half time for Izale McCleod as they looked to respond quickly in the second half. The change had the desired effect as County equalised within seconds of the restart. Following a quick free kick the ball found Adam Campbell who cut in from the left flank, he beat one man then fed Jon Stead who had space on the right edge of the six yard box. Stead made no mistake to fire underneath Alex Cisak to draw County level.

After the break there was only one team making all the running, Moniz’s side had upped the tempo and pace of their play which was causing Orient problems. Only a brilliant block from  Connor Essam prevented Jon Stead connecting a Julian Jenner right wing cross.

With Orient failing to keep hold of possession in midfield, County continued to press with Izale McCleod and Jon Stead linking up well in attack. With the link up good between the front men and Adam Campbell impressing after his introduction made it even more baffling that they started on the bench.

Orient had Alex Cisak to thank just before the hour when Adam Campbell thought he had put his side ahead. With McCleod finding Stead in the right channel, he crossed for Campbell who had run to the near post. Campbell connected with the cross, with his effort looked certain to rustle the back of the net, Cisak saved with his legs to keep the scores level.

Ollie Palmer headed over a Jack Payne cross before Blair Turgott replaced Payne as O’s went with two wingers for the final 25 minutes. County continued to look a threat on the break with McCleod’s pace and physical presence was causing the home side problems. However Badury and Essam were dealing with the threat well and started to have a second wind in the game. Cox crossed for Turgott but the winger tapped wide at the back post.

Orient were certainly pushing forward looking for their first win since August and Ollie Palmer went close with an effort from distance. But Orient did edge ahead just a minute later, a fine move down the right saw Cox play in Turgott on the right wing. Turgott played in Sean Clohessy who had made a run in the inside right channel of the box, his shot was parried by Scott Loach but only into the path of Jay Simpson who tapped home.

With Orient ahead, Hendon was looking for his side to see the game out but it got even better for Orient and Moore. Moore netted his first in an Orient shirt earlier in the game but he wrapped up victory with “the best goal he has ever scored” with a stunning 30 yarder giving Scott Loach no chance in the County goal. Moore was found in space and unleashed a fine effort, almost a carbon copy of his shot at Cambridge in the dying minutes but this time it flew wonderfully into the top corner. Moore was as surprised as everyone that it went in but surely another goal of the season contender… Which I may add include some real crackers already.

3 points is 3 points no matter how you look at it, the performance was good in periods but poor in others however unlike other recent games Orient gained the 3 points. The defensive frailties will concern Hendon once more with his side seemingly asleep at the start of the second half to allow County to level. Orient did take more chances than they have recently but the same missing ruthlessness nearly came back to bite them in the second period.

However, the phrase you don’t care how you get the win and the key to a good side is to win when you are not at your best come to mind. Well today goes into that bracket, with Orient bouncing back from their defeat in midweek. Sammy Moore was once again great in midfield alongside Jack Payne and Bradley Pritchard. Adam Chicksen was solid in defence while Connor Essam continues to impress every week and develop his partnership with Mathieu Baudry.

Hendon revealed post match to leytonorient.com that he is looking to bring 2 new players in this week. One of them is certain to be a striker with Orient limited in attacking options currently with Paul McCallum’s injury. Let’s make no mistake that when Orient are at full strength they can beat anyone in the league and hopefully the result today kicks them on again.

“A battle” described the game in Hendon’s opinion who will be delighted his side grinded out victory and will need that in abundance when they travel to their bogey side Crawley next week. It was in fact a good day for Orient with Portsmouth drawing, Wycombe and Acrrington losing; it moved Orient to third in the table just 2 points off the top of the table.

Onwards to next Saturday, where it is imperative another positive result is picked up to keep Orient on the way forward.