Jack Payne’s freak goal sealed Leyton Orient’s first win in 4 games. Payne followed in a Morecambe clearance just before the half hour mark, with his effort flying underneath home keeper Barry Roche. Orient failed to test Roche in the second half but had to be thankful to their own keeper Alex Ciask who saved well from Aaron Wildig and Tom Barkhuizen in the second half. The win keeps Orient in 6th but with the league tightening, they sit just 2 points from second spot.

Morecambe who came into the game on the back of four consecutive wins made one enforced change; Paul Mullin replaced the injured Shaun Miller in attack. Orient named an unchanged side following their 1-1 away draw at Luton on Tuesday night with Ollie Palmer overcoming a late fitness test. Dean Cox was left out of the matchday squad despite travelling. 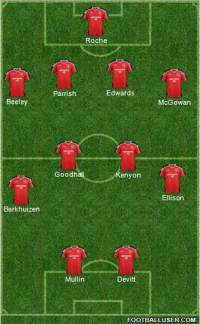 Morecambe who were the league’s top scorers after netting 11 goals in their last 3 matches started slowly with Orient having the majority of the possession. It was the Shrimps who had the first half chance of the game though with home center back Ryan Edwards heading wide at the back post following a corner.

Orient lined up in their conventional midfield diamond but lacked width and remained very narrow in midfield. Full backs Adam Chicksen and Sean Clohessy had license to go forward but seemed reluctant in the opening exchanges. With Orient narrow in midfield, the home side were trying to overload the right hand side. Alan Goodhall broke through the middle playing Jamie Devitt in on the right hand side but his cross was blocked for a corner.

The O’s were finding it difficult in attacking areas with the final ball lacking. At times, the away side lacked options as they reached the final third and resorted to long ball to Ollie Palmer on numerous occasions. Tom Barkhuizen and Shaun Beeley were continuing to link up well down the right hand side for the hosts with Barkhuizen’s cross headed over at the post by Devitt.

Jack Payne, who had regained his place back in the side after being dropped against Oxford last week was once again the engine room in the midfield. The former Peterborough captain was trying to dictate play for Orient and in freak fashion he grabbed his first goal for Orient. After the ball broke on the edge of the Morecambe box to Payne, his through ball to John Marquis was intercepted. Payne threw himself into a challenge with the deflection flying underneath Barry Roche to give the O’ the lead. The bit of luck O’s manager Ian Hendon had insisted will come and it duly did with a freak goal for Payne.

Despite Morecambe’s attacking threat, they also had the joint worse defensive record in the division conceding 27 goals. It was clear to see why at times, pushing a lot of men forward leaving them exposed to a break away if they were caught in possession. It was here where Orient nearly doubled their advantage, after pressure in midfield, Ollie Palmer nicked the ball. Palmer’s through ball found Bradley Pricthard in the right channel, Pritcthard crossed looking for Jay Simpson in the center but his effort clipped the bar.

The away side held the lead at the break but nearly blew it just a minute after the restart. Paul Mullin was played in behind the O’s backline but his shot was scuffed wide. Hendon’s men looked to add to their margin with Clohessy and Pritchard linking up down the right. Pricthard crossed to Palmer at the back post with his header back across goal inches from the foot of Jay Simpson who would have been left with a tap in. Simpson who is the league’s top goalscorer with 11 goals nearly made it 12 as he swiveled on the edge of the box however his left foot shot curled wide of the post.

Morecambe brought on Aaron Wildig for Alan Goodhall as they searched for the equalizer. Jamie Devitt dragged a shot wide but Orient looked far for certain at the back. Hendon replaced John Marquis with Lloyd Jame as Orient moved to a 4-1-3-2 formation with Jacj Payne continuing in a deeper midfield role with James, Moore and Pritchard slightly further forward.

Payne continued to impress for the O’s and it was his ball to Pritchard which made the next chance. Pricthard played Clohessy in, the full back’s cross found Palmer at the back post, he knocked down to Simpson however his attempted effort was blocked. Morecambe threw on Lee Molyneux and Jack Kellner as they looked to force an equalizer with Orient still looking vulnerable in defensive areas.

Hendon’s side were without a clean sheet in 10 games and began to sit deeper and deeper. Connor Essam and Mathieu Baudry looked far from comfortable dealing with the aerial balls forward and the tricky conditions which was concerning the away contingent. All Orient needed was a second that would have killed the game and Lloyd James was doing his best. He won the ball in the midfield and advanced forward, he laid off to Palmer but a defender nipped in as he was about to shoot. As the game ticked down, Morecambe continued to throw lots of men forward with Ciask saving well from Aaron Wildig and Tom Barkhuizen. Orient’s defence as times appeared to be on a “suicide mission” in the dying minutes as they lost the ability to retain possession.

But Orient did grab the precious 3 points with a clean sheet which was the most important thing. The O’s were without one since 29th August and picked up only their fourth of the campaign. The clean sheet will do the world of good to the team as a whole however Orient looked far from comfortable at the back. Defensive frailties have been a part of Orient’s game recently but mistakes were not punished with Alex Ciask keeping his sides lead in tact when called upon.

Jack Payne continues to impress in the midfield, pulling the strings once more highlighting why Ian Hendon was so adamant on bringing in him in the summer. His desire and influence appears to calm Orient at times with his captain’s instincts beginning to shine in the team. Despite being one of the last men in the squad, Payne is far from frightened to get his team mates going. he deserved his goal after his recent performances and on current form is the first man on the team sheet at the moment.

The “Cox issue” remains far from clear with the winger left out of the squad despite travelling to the game. A decision which baffled most of the 398 away contingent with Cox sitting with us for most of the game. Is there something beyond the surface between Hendon and Cox? Well, we may not know but Hendon has made it public that he wants a reaction in training from Cox. Hendon was somewhat vindicated with his decision as Orient picked up the victory but the issue needs to be cleared up quickly. Cox has not been great in recent weeks but the number 7 has the ability to change any game.

A win is a win, no matter how it comes and on yesterday’s evidence the luck and rub of the green has changed. In a difficult game with limited chances it was settled with a Payne’s deflection. It could have gone absolutely any where but fortunately for Orient it flew in and gave them 3 points. A great away day and what supporting Orient is all about. Accrington at home next Saturday, it will be another difficult game with Stanley one of the surprise packages in the league this season.

We only sit 2 points from 2nd spot and the phrase “anybody can beat anyone” was again on evidence this week. Oxford beat league leaders Plymouth on Tuesday night but lost at home to Barnet yesterday highlighting that no game is easy in the division. Only 3 points separates Portsmouth in second spot and Accrington in seventh. The league is very tight but hopefully yesterday’s victory can put Orient on another run of wins. It is never dull being an O’s fan but more of a pleasure… well