“One of Our Best Performances Away From Home”

Ian Hendon described Leyton Orient’s 1-1 draw away with Plymouth last night as “one of our best performances away from home, desire, commitment and effort was brilliant”. It is easy to see why with Orient looking comfortable for the majority of the evening apart from a few scares in the opening period. The man of the moment Jay Simpson volleyed home for his 14th league goal of the season to put Orient on their way after just 4 minutes.

Plymouth really should have levelled when Jake Jervis somehow managed to screw his shot wide but Orient set up brilliantly after Simpson was withdrawn through injury. The away side contained the league leaders resorting them to little in the second half and really should have doubled their lead through John Marquis and Bradley Pricthard. However as normality resumed in the Orient camp, Curtis Nelson levelled after Alex Cisak saved from a free kick with just 9 minutes remaining to snatch Plymouth a point.

Argyle who had been on a sticky spell of results made 1 change from the side that lost 2-1 in the Devon Derby with Exeter City on Saturday. Carl McHugh came back into the side in central midfield with Josh Simpson dropping down to the substitutes bench. 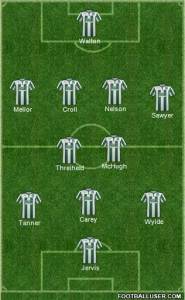 Orient who picked up only their third league win since September on Saturday, were forced into one enforced change with captain Mathieu Baudry failing a late fitness test with on loan defender Cole Kpekawa filling in a center half. Sean Clohessy took the armband for the away side in the absence of Baudry. 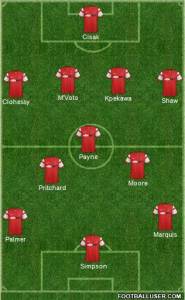 Plymouth fell behind to Exeter on Saturday and were facing an uphill task after Jay Simpson notched his 14th league goal of the season. Following a Sammy Moore header forward, Ollie Palmer flicked onto Simpson. Simpson chested down then volleyed high beyond Christian Walton in the Plymouth goal from outside the area to put Orient ahead.

Ian Hendon had set his side up to resort back in to a 4-5-1 formation without the ball with John Marquis and Ollie Palmer asked to fill in on the wings. Plymouth looked shocked from the opening period with Orient the better side with Jack Payne volleying wide before Jean-Yves M’Voto headed straight at Christian Walton from a Sammy Moore corner.

Orient were looking comfortable in possession but as the half grew on Derek Adams men began to come into the contest. With Graham Carey looking to pick up the ball in the no 10 role, he was finding space to pick out Wylde and Tanner on the wings. Carl McHugh saw a goal-bound effort blocked around for a corner before a guilt edge chance for the home side. After Frazer Shaw’s clearance hit Jay Simpson, Carey picked the loose ball up and played in Craig Tanner down the right. Tanner’s cross found Jake Jervis free at the back post but somehow Argyle’s top scorer failed to add to his 7 league goals this term.

The O’s were finding it hard to keep possession and were inviting pressure from the home side with their formation at times. Argyle had scored in every home league match before the match and were increasing their foothold on the game. With Marquis and Palmer filling in down the wings, Argyle were looking to exploit 2 on 1 with both full backs Gary Sawyer and Kelvin Mellor pushing forward. Josh Simpson should have tested Alex Cisak after 38 minutes but failed to hit the the target after collecting a Jake Jervis flick on.

Orient were then handed a blow with Jay Simpson taken off with an injury with Lloyd James coming on in place of Orient top scorer. Orient moved from a 4-3-3 formation to a 4-4-2 formation with James moving next to Jack Payne in central midfield while Sammy Moore moved left and Bradley Pricthard.

Hendon’s men started the second half brightly with Marquis and Palmer looking to run in behind the Argyle defense. It was on loan Marquis who forced Walton in a low save down to his right after latching onto a James through ball. Carey screwed a shot wide for the home side but Orient looked comfortable and were the side looking more threatening going forward.

Jack Payne volleyed straight at Walton from the edge of the box before Marquis’s good work down the right saw his pull back to Moore hit high over the bar at the back post. Orient were well discliplined within their shape resorting Plymouth to get frustrated with passing around their back 4. Every O’s player was working extremely hard out of possession and with the home crowd getting restless, the away side sensed their chance to kill the game off.

Just before the hour, the game should have been put to bed, Marquis blocked a Plymouth clearance and beared down on goal. Working space he hit his effort straight at Walton who made the save. From the resulting thrown in, Marquis crossed from the byline but Bradley Pricthard could not connect well enough to see his effort creep into the bottom corner. 2 guilt edge chances that we all knew would come and bite as back later on.

Orient looked comfortable and it was one of the best defensive displays of the season, Marquis volleyed wide from the edge of the box however the pesssism which remains in all Orient fan resurfaced with just 9 minutes to go. After giving away a free kick mid way inside their half, Orient failed to deal with the set piece, Luke Croll’s effort was saved by Alex Cisak but Aryle center half Curtis Nelson was open in space to slot home for the equaliser.

“The envitable” were the words used amongst the away fans, but why should it be expected that we concede. Everything had be completed down to a tee but failure to set up from a set piece costed the O’s. After the equaliser, Argyle had the wind in their sails and pushed for a winner. Jake Jervis went down under a M’Voto challenge but referee Andy Woolman waved away appeals. Marquis could have even won the game for Orient at the end, after a neat one two with Palmer, Marquis shot from outside the area was pushed away by Walton with both sides settling for a point.

“Respect the point” and we will, going to the league leaders on a cold Tuesday night, we all know we would have accepted a point before the game. However Ian Hendon agreed with many fans in his interview with leytonorient.com post match “2nd half we were fantastic, we are unfortunate with the goal but we would have taken a point before hand”. Hendon added “We should have been extending our lead, John had a few good chances but we certainly deserved all 3 points”.

With a make shift defense they performed well, O’s weathered an early storm where on another day Jervis and Josh Simpson should have tested Cisak. However you ride your luck and with Jay Simpson in your side, he is always capable of a bit of magic in a game. A wonderful volley to put Orient ahead with the only worrying aspect of the result; the extent of his injury. Simpson has hit 14 of Orient’s 31 League goals this term.

Plymouth only had 2 shots on target with Cisak only making one save in the second half, it is easy to see who were the better side. The word clinical springs to mind once more, how many games should we have won if we could take our chances? But as Sean Clohessy stated after the Hartlepool defeat “if we get a clean sheet we win the game, main part of the game and got 1-0 ahead”. 1 clean sheet in 16 is something which has to improve if Orient are going to challenge. The game is made harder if you know you have to score at least 2 goals to win a match.

4 points from the last 6 and a home match on Saturday, Orients sticky spell looks to be coming to an end. The discipline and work rate from Orient last night was top notch with only disappointing thing, the goal conceded; otherwise the perfect away performance. Hendon and his staff would have been happy with how his side performed , onwards and upwards to Saturday now.

Questions remain how long is Baudry injured for? How bad is Simpson’s injury? We will find out in the coming days but one thing you know that being an Orient fans is never boring. An away trip to Plymouth is what some people call mad, mental or crazy but we go because we love the club. I can’t wait for the next game on Saturday, I mean what is better than seeing Orient on a Saturday… well many people can find things better than that.