Jay Simpson scores, concede a sloppy goal, Repeat. That appears the motto in the Leyton Orient camp right now. For the third consecutive league match Jay Simpson put the O’s ahead before Orient conceding a sloppy goal as they drew with Play off challengers Mansfield Town – their fourth draw in a row.

The most prolific man in the top four English Leagues headed home a Jobi McAnuff cross after 12 minutes to put Orient ahead. There looked to be little danger as both sides battled tricky conditions until Craig Westcarr’s hopeful cross 5 minutes before the break fell to Reggie Lambe who volleyed home from the edge of the box. Town were the stronger side in the second half and could have snatched the win but center half Krystian Pearce could only crash a header off the post.

Mansfield manager Adam Murray only made one enforced change from his sides 3-1 win at Barnet two weeks ago with Jamie McGuire coming in for Chris Clements who was serving his suspension.

O’s boss Ian Hendon made 4 changes ahead from the side that drew with Scnthorpe in the FA Cup last weekend, John Marquis, Jay Simpson, Cole Kpekawa and Alex Cisak all returned to the side. Former Stags striker Ollie Palmer was named on the bench in his first visit back to his former club. 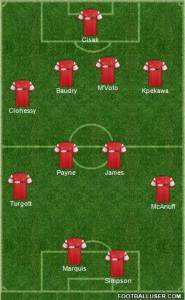 Following a late pitch inspection due to heavy rain in the area, both sides were finding it hard to adapt to the conditions. Town looked to have adjusted quicker than the visitors to the sticky pitch. However, Orient did strike first at the One Call Stadium, following a move forward John Marquis found Jobi McAnuff on the left wing. The midfielder who was making his first league start of the season, cut inside and whipped in a delicious ball to Jay Simpson. Simpson does what he does best, heading home beyond Brian Jensen for his 16th goal of the season and his 5th goal in 4 games.

The opening goal seemed to settle down Hendon’s side who looked comfortable in the contest. After good pressure from the O’s, Blair Turgott found John Marquis but the on loan Millwall striker could only fire over from the edge of the box. There was nothing between the sides but Orient began to sit deeper inviting the home side on to them. However Orient could have doubled the lead on the half hour mark, Jobi McAnuff and Cole Kpekawa linked down the left with the latter’s cross just missed Blair Turgott and the back post.

Despite creating little going forward, Mansfield were beginning to dominate possession, finding little pockets of space. Then what every Orient fan in the away end could have seen forthcoming. Following a throw in on the right hand flank Craig Westcarr put a looping cross into the box; the ball fell to Reggie Lambe who volleyed home from the edge of the box. It becomes inevitable that will happen in a game, in 4 of the last 5 games Orient have scored first and failed to win the game – taking only 4 points from a possible 15.

Orient should have gone back ahead just before half time when Jean-Yves M’Voto connected with a Lloyd James corner but the French defender could only head over. The story of recent matches, score first in a match, fail to get a second then pay for sloppy defending.

Orient started the second half brightly with crosses into the box but the danger to the O’s back line wasthe home side catching them on the break. Matt Green had a shot blocked as Town looked to counter attack when Orient pushed men forward in attack. The O’s who had drawn their last three matches in all competitions searched for a second goal but Lloyd James’s free kick was blocked before Jay Simpson could only turn and volley over the bar.

Ollie Palmer was introduced in place of Blair Turgott but it was nearly the worse possible entrance for the former Stags striker. Krystian Pearce rose highest from an Adam Chapman corner but the center half powered his header against the post.

Palmer was searching for his first goal in 18 league matches but he was unable to get a shot away after creating space in the box. But it was the home side who turned the screw looking for the win, Orient were heavily under pressure. Matt Green saw a header fly wide before Jamie McGuire could only volley over. Mitchell Rose was last to test Alex Cisak when his fizzing shot from distance was held well by the O’s keeper.

On another day, M’Voto could have been sent off after Matt Green broke away just inside the Orient half, the O’s center half took out Green. The only thing saving M’Voto was the distance Green was from goal but that was the last action as both sides had to settle for a point. Mansfield remain in the last play off place while Orient drop to ninth.

Another game, another draw; but that’s 5 games unbeaten in the league since the 3-1 defeat away at Hartlepool and one defeat in the last 6. However, with little separating the sides at the top, draws have to be made into wins, the O’s have drawn 8 of their 21 games, 38%. I think the main problem with Ian Hendon, is he is too frighten to lose a game at the moment rather than win a game so settled for draws, especially away from home.

The most annoying part of going to an Orient game, is at the moment you know the format of the game We will score first then not go for the killer second and concede a sloppy goal. I have said before why is it inevitable that this happens? Orient have only kept 1 clean sheet in 13 away matches this season, the task at hand is always harder when you know you have to score 2 goals to win a match. Orient are always a threat with Jay Simpson in the side, will Orient keep hold of him in January?

Orient travel to Scunthorpe on Tuesday night in their FA second round replay after drawing the first match 0-0. A potential third round opponent of Chelsea awaits in January, what more incentive do you need? A Tuesday night in Scunthorpe, what dreams are made of right? Well, why not you say, Orient never make it easy but we all #daretodream don’t we. See you at Glanford Park…