The Clock is Ticking

Was that enough from McAnuff to keep Ian Hendon in his job as Leyton Orient manager. With the mood around Brisbane Road after Francois Zoko headed Yeovil in front in first half stoppage time, you certainly know that not all of the O’s fans are happy with the former West Ham coach. At times it was hard to see which side lied 2nd bottom with just 2 league wins all season.

The away side looked together as a team from minute one with huge credit being awarded to interim manager, Darren Way. Way has now only lost once in four matches since taking over from Paul Sturrock and in truth he would have been disappointed his side didn’t take all 3 points. Orient’s injury curse struck once more with Jack Payne stretchered off with what looked a serious injury and not more than a minute afterwards Zoko headed Yeovil in front after a catelogue off errors.

Boos rung out at half time with Orient trying to respond early in the second half but failed to test visiting keeper Chris Weale. 34 year old Jobi McAnuff was introduced 10 minutes in to the second half and was the man to bail out his manager. McAnuff who was making only his 3rd appearance of the campaign after being banished from the first team squad at the start of the season. However, 16 minutes from the end, McAnuff received a pass on the left, cushioned the ball inside the full back and unleashed a 30 yard piledriver. Yeovil had a late penalty appeal when Iffy Allen looked to have been upended by Fraser Shaw but appeals were waved away as both sides had to settle for a point.

O’s manager Ian Hendon made 3 changes from the side that lost 3-0 in their FA Cup second round replay to Scunthorpe in midweek. Jobi McAnuff and Ollie Palmer dropped to the bench while Sean Clohessy missed out due to sickness. Cole Kpekawa slotting in a center half after being cup tied in midweek. Scott Kashket was handed a start up front with Jay Simpson as Bradley Pritchard returned into the midfield. 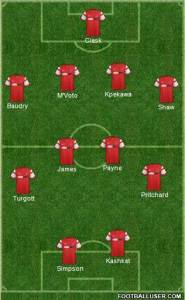 Yeovil who battle back from 2-0 down last weekend at home to Crawley made 2 changes from that side. Iffy Allen and Nathan Smith were recalled to the side with Wes Fogden and Harry Cornick dropping out. 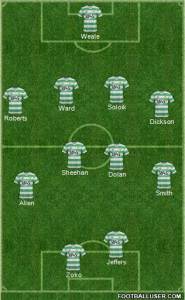 With Orient keen to pick their first win in 5 matches they started off very slowly. Yeovil looked right up for the game as Iffy Allen caused problems in the opening minute crossing from the right but the chance was cleared. Orient struggled to create going forward with no real plan of action in attack. With Scott Kashket and Jay Simpson in attack, Orient were not playing to their strengths on the floor rather than hitting long balls which was proving to be easy pickings for Yeovil.

Josh Sheenhan had a sighter from distance before Matt Dolan curled a free kick straight at Alex Cisak in the Orient goal. Mathieu Baudry slotting in at right back in the absence of Sean Clohessy but in truth Orient looked nervous at the back from the start. Orient were trying to play out from the back with Jack Payne continually coming deeper to pick up possession. However with Blair Turgott coming in of the right flank and Bradley Pricthard narrow on the left, there was a lack of invention and any creativity in the attacking third.

Yeovil were looking comfortable and were causing the home side problems at the back. Ryan Dickson skipped past Baudry down Yeovil’s left crossing for Iffy Allen at the back post but the winger volleyed high and over. Orient’s passing and movement was slow, very easy to predict for Yeovil who were keeping their shape well.

In a half which lacked any real quality was beginning to pass everyone by but good work from Iffy Allen down the right saw his pull back fall to Josh Sheenhan; however the midfielder cushioned his effort over. Orient first real chance of the half came when Jay Simpson was found on the right, he played in Blair Turgott who saw his shot deflected for a corner.

Then the injury curse struck once more for the home side as Jack Payne went down under a challenge in midfield. With Paul McCallum, Dean Cox and Sammy Moore currently missing due to injury, it was last thing that Hendon wanted to see. However with Orient’s players more concerned about Payne’s injury, their concentration levels dropped as another extremely poor goal was conceded. Frazer Shaw lost the ball on the left to Allen who pushed forward, his cross was cleared poorly by Shaw to Josh Sheenhan. Sheehan crossed was miss kicked by Jean-Yves Mvoto leaving Francois Zoko to head beyond Cisak.

As half time sounded, large boos rung out around the ground and it was hard to see why not. The team second bottom of the football league prior to kick off looked very comfortable against a side looking for promotion. Yeovil had only scored 6 goals away from home before the game but with the defended that Orient possess, most Sunday league sides would have scored.

Ollie Palmer replaced Jack Payne after the goal at the end of the first half but Orient looked to start the second half strongly. Jobi McAnuff was introduced for Scott Kashket 10 minutes into the second half with Hendon looking for a response from his team. It took till just under the hour mark for Orient’s next chance, Ollie Palmer brought the ball down inside the box but was unable to get his shot away, with frustration growing ever more with the home fans.

Jay Simpson who had barely a sniff of goal all match did well to fashion an opportunity for himself but curled a shot over the bar as Orient continue to search for a leveller. With the home side pushing forward, spaces were being left at the back by Orient with Iffy Allen and Francois Zoko a real danger on the break. Allen and Zoko had efforts blocked a saved as the Glovers searched for only their second away win of the season.

It would take a moment of magic to dig Orient and Hendon out of a massive hole and it arrived 16 minutes from the end from Jobi McAnuff. The man who didn’t make an appearance for Orient until late November cushioned a pass from Lloyd James inside his full back and arrowed a thunderbolt into the top corner leaving Weale with no chance.

The goal seemed to wake up Orient who had been lackluster to say the least in the 74 minutes minutes prior to the goal. The game was nearly turned upside for the away side as Jay Simpson headed a Baudry cross straight at Weale before McAnuff did well on the left but his cross was put out for a corner.

Both sides were looking to win the game in the remaining minutes but Orient still look susceptible to another mistake at the back. It duly arrived when Frazer Shaw was again the man at fault, his header back to Cisak was short. Iffy Allen who had been a danger all game tried to nip in as Cisak and Shaw collided. Allen got to his feet and with Shaw looking to make appends looked to have gone right through the back of the winger. With the Glovers bench up and appealing, penalty appeals were waved away.

With Orient still intent on trying to win the, McAnuff nearly repeat his trick again, receiving a James pass, the 34 year old narrowly curled a shot wide of the far post. Palmer and Pricthard both had efforts saved a blocked in the final minutes but Yeovil went closest to nicking the 3 points when Zoko’s run found substitute Ryan Bird. Bird’s left foot effort just crept past the post a both sides had to settle for a draw.

A fourth consecutive league draw for Orient which sees them slip to 10th in the table – their lowest position of the season. But in truth, words do not show how bad the first half was from Orient. No spark and creativity from the home side who seem to be their own worse enemy currently. The past three games has seen individual errors cost Orient goals and yesterday was no different. BBC Sport described Tuesday’s effort against Scunthorpe as “How not to defend” I don’t what they can possibly think will do Yeovil’s goal justice.

So the statistics issue is constantly brought when a manager appears to be under pressure and I think it is clear for all to see how much pressure Hendon is under. Since September Orient’s league record:

Only Dagenham, York, Hartlepool (11) and Yeovil (10) have taken less points that Orient in that period.

After a brilliant start, Orient have been found out tactically and it appears the coaching team at Brisbane Road has failed to find a different way of playing. Andy Hessenhaler described the performance to leytonorient.com as “unacceptable, there was no life in us”, a brutally honest opinion on the game and he was right. Let’s put it into perspective, Slade was under pressure after 6 matches of last season. Francesco Bechetti seems to have matured and understood more about the football club but the question remains, Is Hendon the right man to push Orient forward or is a change needed?

Well, it is a big 3 matches for Hendon: home to Porstmouth, Away to Bristol Rovers and away to Stevenage. Bechetti has got to realise that if you give Hendon a budget in January, you cannot sack him for a good time afterwards to give him time to knit the group together. If you were at Brisbane Road yesterday, you will know the feeling of the fans right now. The only benefit yesterday was it was a 70 mile round trip to see that performance rather than a 320 mile round trip on a Tuesday night.

It doesn’t get any easier for Hendon as Portsmouth travel to Leyton next weekend, the second highest scorers in the division.  It is quite clear that defending like we saw yesterday, Portsmouth will be rubbing their hands watching that. “If we perform as we have been doing in the last few games and cut out the mistakes we will get back to winning ways – it is as simple as that” were the pre match comments from Ian Hendon, but if your team fails to have a shot on target until the 74th minute, you have a problem. It appears as an onlooker that there is no training done in the week about attacking shapes and different ways to score. The message needs to be “if in doubt, kick it out” it might not be pretty or what we want to see but it would stop the mistakes we see every week.

The problem remains, Orient have to score 2 goals in a game to win a match. Orient have only score twice in 2 of their last 12 matches in all competitions. And when you can’t keep a clean sheet at home against a side at the bottom reaches of the division what chance do you have with a team at the top. Next weekend will be tough, we all know that Orient will give us some Christmas cheer… well maybe…. but we will still be there at Brisbane Road at 3pm.