Rondon to the Rescue

Salomon Rondon’s injury time equaliser snatched a point for West Brom at home to Swansea last night. Rondon pounced after Swansea fail to clear a late corner to salvage a draw against an improved Swansea side. Francesco Guidolin took charge of only his second game since his appointment and nearly made it three wins on the spin for his side. Glyfi Sigurdsson swept home to give the Swans the lead after 64 minutes. The Swans continued to attack and the impressive Alberto Paloschi nearly grabbed a second but his close range finish clipped the post.

Pulis threw on Victor Anchiebe and the much talked about Saido Berahino in search of the levelling goal but it was Rondon who notched for the Baggies. Swansea remain 3 games unbeaten since Gary Monk departure and on last night’s evidence they appear to be getting back to their best. Pulis felt his side did enough for all 3 points but after missing some guilt edge chances, the Baggies boss waved away boos to see his side move on 29 points ahead of another relegation crunch match at Newcastle on Saturday.

The Baggies, off the back of their 2-2 draw in FA Cup with Peterborough on Saturday, made 5 changes. Sebastien Pocognoli was replaced by Jonas Olsson while Saido Berahino and Rickie Lambert dropped to the bench in place of Salomon Rondon and the returning Darren Fletcher. Ben Foster was welcomed back into the side with Boaz Myhill dropping to the bench with Tony Pulis including recent signing Sandro in midfield.

Swansea who came into the clash off the back off their 2-1 victory at Everton named an unchanged side. Andre Ayew continued in attack with Angel Rangel preferred to Kyle Naughton at right back. Francesco Guidolin did name Alberto Paloschi his new signing from Chievo on the bench alongside Batemis Gomis and Jeffereson Montero. 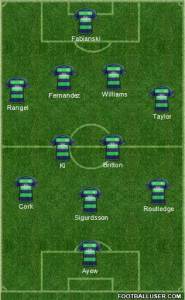 The Baggies started the brightest and could have taken the lead in the second minute, a good cross from the right from Craig Dawson found the head of Darren Fletcher but a smart tip over Fabianski kept the former Manchester United man out.

Swansea then started to gain a foothold in the game with their typical free flowing passing through midfield. A natural occurrence when watching the side from Wales, Ki and Britton were linking up very well in the midfield. Pulis’s men were struggling to contain the Swans with much of the time being spent in their own half.

Both Swansea full backs Angel Rangel and Neil Taylor were given the freedom to bomb forward and Rangel nearly gave his side the lead. Following a neat turn in the middle, Ki found Rangel on the right but the Spanish full back saw his effort from distance fly wide. Neither side had tested the opposing keeper until a wonderful piece of opportunism from Gylfi Sigurdsson. The Icelandic midfielder controlled the ball 35 yards from goal, spotting Foster off his line, the Swans midfielder unleashed a dipping left footed effort which Foster just about managed to turn around the post.

Despite the majority of the possession, Foster had only been tested once and his side should have taken the lead before the break. First Dawson headed wide from a Sessengnon free kick with goal at his mercy then Fletcher shot wide after creating space in the area. Guidolin was forced to replace Ki who had to be replacing following a nasty looking injury with recent Alberto Paloschi. The former Chievo man nearly provided an instant impact but his fierce shot from Wayne Routledge through ball was beaten out by Foster.

The second half started much like the first, Fletcher once again headed over a guilt edge chance following great work from James McClean down the left. Andre Ayew then shot wide for the visitors after creating space at the back post. Both sides made changes with Johnny Evans going off through injury for the Baggies while Neil Taylor was replaced by Kyle Naughton at left back.

The Baggies had struggled to create chances for Rondon in the opening 60 minutes so Pulis introduced the much talked about Saido Berahino for Stephane Sessegnon to much displeasure from the home fans. However Swansea struck immediately after to take the lead, after a loose ball popped up in the penalty area Sigurdsson slotted home for his 6th Premier League goal of the season.

The goal was greeted with boos from the home fans who saw Ashley Williams go close to adding a second for the visitors but his header went straight at Ben Foster. West Brom tried to push for an equaliser with Victor Anchiebe having an effort saved after he was introduced for Sandro. Berahino also went close but Fabianski saved well from the striker.

Swansea still looked a danger on the break through Sigurdsson, Ayew and Britton who broke up play very well for the Welsh side. Paloschi added a much needed physical presence in attack and went agonizingly close to adding a debut goal to his impressive performance. Kyle Naughton crossed from the left side with Paloschi getting in front of his marker but his effort cannoned off the base of the post.

With the game entering additional time, Swansea looked to have held out for a third consecutive victory however Rondon thought otherwise. Following a corner, the ball was not cleared by the Swans leaving Rondon to bundle home the equaliser.

Being my first trip for to the Hawthorns, I was impressed with atmosphere in the Smethwick End especially with the large majority of fans preferring to stand rather than sit. West Brom struggled to get going in the game but did have their chances to win the game especially through Darren Fletcher. It is clear than the Baggies faithful are not happy with tactics employed by Pulis in home games and for large periods last night they played without the ball.

Berahino staying, is that a good or a bad thing? Well after saying he never wanted to play for the club again, he is back in the Baggies strip. He added a little spark that was missing after his introduction but as everybody knows he is nowhere near full fit or sharp. I will be interested to see where Alex Pricthard will fit into a Pulis team after his arrival from Tottenham. I thought Sandro has a good game last night in the midfield. I have a feeling that Sessegnon could make way if Pricthard is going to start for the Baggies.

Swansea appear back to more of what we know them for, possession football with an end product. The attacking two of Ayew and Sigurdsson have a very good partnership going while Britton is a very good defensive player for them. In that system he breaks up play and when watching the Welsh side it is clear that an integral part of their side relies on players being comfortable in possession. Paloschi looks a real addition to their side and it was an impressive debut from him, Guidolin has already made an impact at the Liberty and it appears the Swans are set to be on the up.