Jobi McAnuff’s wonder strike 8 minutes into the second half gave Leyton Orient player manager Kevin Nolan his 3rd win in 4 games. Nolan wanted his side to bounce back from defeat last weekend to Cambridge and they did just that. A third win and third clean sheet, in what was a perfect away performance. Orient should have had more than one with Nolan clipping the bar, Jay Simpson missing two chances and second half substitute Armand Gnaduillet hitting the post. The win moves Orient back in to the play off places ahead of next week’s clash with league leaders Northampton.

Portsmouth manager Paul Cook made 3 changes to the side that drew 1-1 away at Morecambe on Tuesday night. Kieran Freeman, Christian Burgess and Gary Roberts replaced Ben Davies, Gareth Evans and Adam Webster who dropped to the bench. 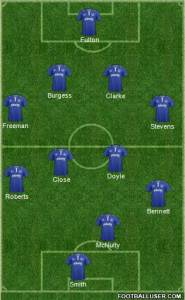 Orient player manager Kevin Nolan made 4 change to his side that lost 3-1 at home to Cambridge last weekend. Sammy Moore came in for Nigel Atangana who missed the trip while Nolan himself started ahead of Ollie Palmer. January signings Nicky Hunt and Shaun Brisley made their debuts ahead of Sean Clohessy and Connor Essam who dropped to the bench. 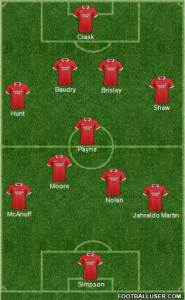 Neither side were able to gain a foothold in the game in the opening exchanges, Kyle Bennett had an early shot for the home side but it was easily gathered by Orient keeper Alex Cisak. Portsmouth were enjoying large spells of possession without really penetrating Orient’s defense. 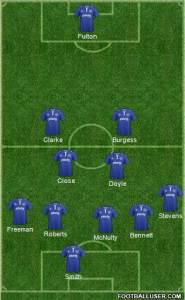 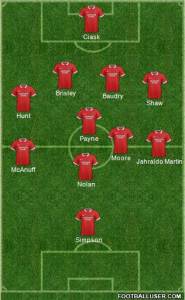 It was clear from the outset that Nolan had set his team up with a plan to stop Portsmouth playing and frustrating the home side. It was working with Orient keeping compact, disciplined and in shape. Cook’s men were looking to switch play trying to create openings but both Jobi McAnuff and Callum Jahraldo Martin were doing excellent jobs of marshaling Portsmouth’s high full backs.

Orient’s game plan was nearly undone on the half hour mark, after Nicky Hunt thought the ball had gone out of play on the right hand side, Kyle Bennett nipped in. Bennett linked with Michael Smith who played in Marc McNulty who broke in the penalty area however Cisak was quick off of his line to snuff the danger out.

With the home side becoming frustrated about the lack of openings, Nolan’s men began to grow in confidence. Jahraldo Martin blazed over in the box on the left while Jobi McAnuff was causing Enda Stevens all kinds of problems down the right winning free kicks for his side.

O’s captain Mathieu Baudry headed into the side netting from an McAnuff free kick before Kyle Bennett fired narrowly over after finding space just outside the Orient area. The away side could have taken the lead right on half time, after the busy McAnuff picked the ball up on the right he crossed in to the center. However the late arriving Sammy Moore headed the wrong side of the near post as the scores were level at the break.

Neither side made any changes at the break but it was Nolan’s men who were out of the blocks like a shot. Good work down the right saw McAnuff cross to the back post however a brilliant clearing header from Christian Burgess prevented Nolan from heading home. The O’s continued pressing for the opening goal and Nolan should have put his side ahead on 49 minutes. After the ball broke to Jack Payne on the edge of the box his shot ricocheted to Nolan at the back post however the former West Ham and Bolton midfielder could only hit the bar with his effort.

Would Orient rue their missed chances, well just 4 minutes after Nolan’s miss, McAnuff put his side ahead. What a goal it was too, after Jay Simpson’s run from the right was halted, the ball fell invitingly to McAnuff on the edge of the box. The former Reading captain unleashed a fantastic curling, dipping effort which left Ryan Fulton helpless in the Pompey goal and sent the 1031 travelling supporters into raptures.

Orient deserved their lead and nearly doubled their lead but Mathieu Baudry could only head wide from a McAnuff corner. Cook introduced Gareth Evans looking for a response from his side however it was Orient who continued to look threatening. The midfield trio of Nolan, Moore and Payne were breaking up Pompey’s play while Jobi McAnuff was a constant menace on the right hand side for the visitors.

Portsmouth looked avoid of ideas in attack and threw on Adam McGurk and Connor Chaplin to try and salvage a result. But Orient’s defense held firm with top scorer Jay Simpson surprisingly miss firing in front of goal. Simpson had struck 22 times for Orient in the league this season and really should have added to his tally. First after Portsmouth failed to clear, Jahraldo Martin and Nicky Hunt had efforts blocked, Nolan headed back to Simpson but the Orient forward was leaning back and his effort flew over. Then following a brilliant break from McAnuff, he crossed to Simpson who headed straight at Fulton 6 yards out. 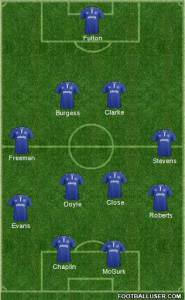 Orient then made 3 substitutions looking to see the game out with Bradley Pritchard, Sean Clohessy and Armand Gnanduillet coming on for Nolan, Moore and Simpson as the away side looked to cement their lead. For all Portsmouth’s possession they still remained unable to break down Orient’s solid defense and once more had another opportunity to make the game safe. Clohessy who moved to the right hand side after his introduction linked up with Gnanduillet, he crossed for the striker but the January arrival saw his left foot volley cannon off the post. 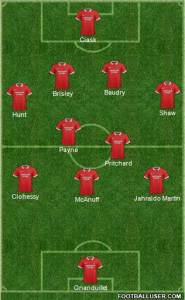 As the game ticked into added time, Pompey continued to throw men forward looking to equalize. However Orient’s back line held firm with two stunning late blocks from Nicky Hunt keeping the lead in tact and giving Orient a precious away win with a wonderful team performance.

A perfect away day for Kevin Nolan’s men, a thoroughly deserved 3 points and I don’t think anyone who was at Fratton Park could have begrudged Orient them. The O’s should have had more and on another day they would have done but the most pleasing thing was another clean sheet. Our 3rd clean sheet in 4 matches something that seemed lunacy only a month ago. But Nolan seems to have instilled a defensive stability which was missing under previous manager Ian Hendon.

Shaun Brisley and Nicky Hunt look really good additions in the team but it would be terribly unfair to single any players defensively display out. From the 1st minute to the last, the game plan from Nolan was simple, be tight, compact, disciplined and strike when you have the chance. He got the personnel exactly right, I myself have called for 3 in midfield in several games this year, we have looked vulnerable in many games but Nolan foresaw that.

The return of Sammy Moore was a much needed boost and with Jack Payne having arguably his best game in an Orient shirt, the coming games look rosier. It is no surprise that Payne played exceptionally well when playing in a midfield 3, like I have said many times previously I feel that you get the best out of Jack Payne when he plays as part of a 3. It gives if more opportunity to pass the ball, tackle and dictate a game with Orient having more control in the middle of the park. I think @les_bristow was glad about the three in midfield after him having to listen to me call for that for the last 2 months.

Every player was fully committed to the course today but a special mention has to go to Jobi McAnuff. A player who has struggled with life at Brisbane Road and I think the player himself would tell you that he wasn’t exactly great last season. However since his re-emergence after his disappearance at the start of the season, he has been a completely different player. A wonderful display capped with a stunning goal, a willing runner and nearly all of Orient’s chances came from him. His experience could be key in the end of season run in.

“Today you have seen a different team” were the words used by Kevin Nolan in his post match interview with leytonorient.com. I think everyone of the 1030 O’s supporters there yesterday could see that; Orient shut out a third team in the space of four games. Nolan appears very grounded, honest and realises that it is just one win; 3 points. The mood has changed around Brisbane Road with Nolan’s work on the training ground being shown on in the results.

How a week changes, a terrible, mistake filled 3-1 defeat to Cambridge followed by a stunning 1-0 victory at Portsmouth. People say how can a team do that, well isn’t that why we love Orient. For all of the bad results this season, that trip will go down as one to remember and hopefully there are many more till the end of the season.

Northampton arrive in East London next weekend as league leaders. It will be a tough game but yesterday’s performance highlighted that Orient have the ability to beat any team in the division, it is just what Orient turns up on the day. I know that under Nolan, we appear to have a manager who has made Orient hard to break down and long may that continue…