Shaun Brisley second half strike sealed Leyton Orient’s third consecutive victory away from home. The on loan Peterborough center half volleyed home 14 minutes from time to settle a dire game at Meadow Lane. In a game of few chances O’s Captain Mathieu Baudry had a header cleared off the line before Brisley popped up with the winner to give player manager, Kevin Nolan his fourth win in six games at Notts County yesterday.

After picking up their third away victory at Harlepool on Tuesday under new manager Jamie Fullarton, County named an unchanged side for the third consecutive match. Izale McCleod partnered Jon Stead in attack while Jason Banton made his home debut for the Magpies.

Orient who were looking to bounce back from their home defeat to Northampton last weekend. Kevin Nolan made three changes to his side, Fraser Shaw, Jack Payne and Callum Jahraldo Martin all dropped out. Jerome Binnom-Williams made his debut for the O’s while Nigel Atangana came into central midfield with Armand Gnanduillet partnering Jay Simpson in attack. 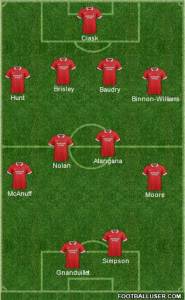 Orient moved to a 4-4-2 formation after playing a 4-5-1 formation in the last two games. Sammy Moore moved to left midfield while Jobi McAnuff kept his position on the right. McAnuff was lively down the right and his crosses were causing problems in the County defense. Binnom-Williams nearly put through his own net after good work from Jason Bantom saw the right winger cross into the box. Binnom-Williams’s clearance was miss timed and flew across the Orient goal for a throw in.

In a game avoid of any football with both sides guilty of giving the ball away throughout the first period. The ball spent more time in the air and out of play rather than on the floor. Neither side had a creative spark which looked to unlock the door as the half faded out. Armand Gnanduillet was making his first start for the O’s but was flattering to deceive with his hold up play non existent at times.

Shaun Brisley and Mathieu Baudry were dealing very well with the aerial balls played forward and it was Brisley who had the only real chance of the half. Following a Sammy Moore free kick, Brisley was unmarked at the back post but his header was blocked for a corner. The game faded out to a draw at half time with Orient still without a first half goal under Kevin Nolan.

Despite having a teamtalk the second half still lacked any real quality or football  to excite the onlooking crowd. Alan Smith fired wide before David Noble called Alex Ciask into action after he palmed away an effort from distance. County had only picked up 4 of their home points against the the top half of the table and with home crowd getting restless, Orient looked to strike.

Jay Simpson who had fed on scraps for much of the game linked up well with Nolan, the ball fell to Armand Gnanduillet on the edge of the box but the January signing from Chesterfield fired over from outside the box. Ollie Palmer replaced Gnanduillet and provided an instant impact in attack.

Orient went within inches of taking the lead, Mathieu Baudry rose highest from a Sammy Moore corner. However with the Frenchman’s header looking destined to hit the back of the net, Curtis Thompson cleared off the line to keep his side in the game. Callum Jahraldo Martin replaced Sammy Moore on the left with Orient looking to grab the late winner.

Hayden Hollis fired over following a scramble in the Orient box but County rarely threatened Alex Ciask. The two substitutes were providing Orient with more attacking prowess, Jahraldo Martin’s pace and directness was causing problems down the left. His work forced a corner which led to the winner. Having the worse record for conceding goals in last 15 minutes, County continued that record as Shaun Brisley forced home the opener. After the corner wasn’t cleared, the ball was kept alive in the County area leaving Brisley to volley home his first goal for the club.

Orient had kept three clean sheets in five games under Nolan but began to sit deeper inviting pressure onto them. Palmer and Jahraldo Martin provided outlets for Orient when they looked to attack and Simpson pulled a shot wide as Orient failed to add to their lead. Izale McLeod headed straight into Ciask before Jon Stead headed County’s last chance over as Orient picked up their third consecutive away win with three consecutive clean sheets.

Well, probably the worse game of football I have watched this season. Avoid of any football or even periods with the ball on the floor. But once again Orient’s inconsistent form continues, the question is whether Orient can avoid the sequence next weekend at home to Crawley. Orient took their chance in a dire game and that is probably a too generous term for the game.

It was a game where Orient would have lost 1-0 under Ian Hendon but Nolan’s tactics are not nice to watch. The ball was pumped long with little change but when the ball was passed around a little bit, Orient looked more creative. The defence were rarely threatened with Shaun Brisley building a good partnership with Mathieu Baudry. Binnom- Williams on yesterday’s evidence looks no better than Frazer Shaw at left back and at times could not keep the ball in play.

A third consecutive away clean sheet and Orient’s fourth in six games under Kevin Nolan. The former West Ham man has definitely the defensive stability of Orient and when the East London side take the lead, there is more faith that they will see the game out. All the players were guilt of mistakes and miss placed passes but surely the manager himself has to realise that on the last two performances, he cannot play next weekend.

Harsh or not, Nolan was the worst player in an Orient shirt against Northampton and kept his place yesterday. Yesterday, was much of the same and as I have said previously I think starting him adds more pressure on Orient to gain a result.

3 points is 3 points no matter now it comes. It will read the same at the end of the season as a 4-0 win apart from the goal difference. Orient have three key games coming up with picking up results in all three imperative to keep Orient’s aim of the play offs in tact. The League is so tight but Nolan next aim is to crack the home record and produce a performance to beat Crawley next weened. Orient’s bogey side, so who would bet on a Crawley victory next weekend?