A Game of Two Halves

Michael Raynes’s header six minutes from time prevented Leyton Orient from making it four consecutive away wins. Macauley Gillesphey’s free kick put the home side into a deserved lead with the Cumbrians unlucky not to be more in front with Alex Cisak prevented Charlie Wyke from adding to the score. Orient looked far from a side challenging for the play offs but a key double change at half time changed the game

Ollie Palmer and Sammy Moore were chucked on as Orient moved to a 4-4-2 formation after lacking attacking intent in the first period. Jay Simpson drew the away side level five minutes after the interval after collecting an Ollie Palmer through ball. Kevin Nolan’s men continued to grow in ascendancy with Moore and Nolan going close. However Palmer put the O’s ahead with a confident finish after good work down the right but it was not the end of the scoring with Carlisle equalising six minutes from time as Michael Raynes rose unchallenged inside the six yard box. Both sides in the end had to settle for a point a piece.

Keith Curle made two changes from the side that beat Morecambe on Saturday, Mark Gillespie came back into the sticks with Dan Hanford dropping out. Luke Joyce came into the midfield with Brandon Comley dropping out after picking up at injury on Saturday. 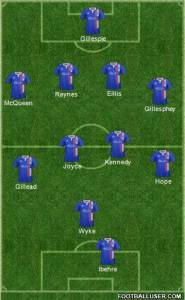 Kevin Nolan made two changes after his sides 2-0 win over Crawley at the weekend. Callum Jahraldo-Martin came in for the injured Armand Gnanduillet while Jack Payne came into central midfield with Sammy Moore dropping to the bench. 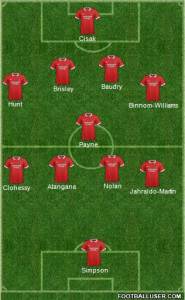 With the conditions difficult for both sides with rain and wind swirling around Brunton Park, it was no surprise that both sides made a slow start to the game. Despite the away side having five men in midfield they were struggling to keep possession as Carlisle looked to dominate. Former O’s striker Jabo Ibehre had a cross shot easily saved by Alex Cisak as the Cumbrians looked to grab the opener.

The O’s lacked any real attacking threat with Nolan’s men continuing to try and hit Jay Simpson with the long ball. The hosts were growing in confidence with Ibehre and Charlie Wyke linking up nicely in attack. Jason Kennedy was brought down on the edge of the box as the away side failed to clear away the danger. Macaulay Gillesphey stepped up and curled beyond Cisak to put the hosts into  deserved lead.

Despite falling behind, Nolan’s men continued to lose possession in midfield, putting pressure onto their defense. Carlisle nearly doubled their lead after Ibehre sent his strike partner Wyke through but Cisak smothered the chance out. The hosts were outplaying Orient and could have gone further ahead but Wyke headed over after Michael Raynes knocked down at the back post following a free kick.

Wyke was replaced by Steven Rigg after picking up an injury but despite Orient flashing a corner across the area; it was still the hosts that looked more likely to score. Ibehre was continuing to find space in attacking areas but his cross shot was saved by Ciask with Rigg unmarked in the center. Jason Kennedy glanced a Alexander McQueen cross beyond the far post as Carlisle ended the first half stronger.

Nolan had got his formation wrong with Jay Simpson looking very isolated in attack so the former West Ham man made a double change. Sammy Moore and Ollie Palmer replaced Jack Payne and Sean Clohessy as the O’s moved to a 4-4-2 formation. The change in the set up gave Orient an instant lift in attacking areas as they looked far more competitive. Nigel Atangana blazed over from inside the six yard box before Simpson drew the away side level. After a neat through ball from Palmer found Simpson, the former Arsenal man jinked past one and finished low beyond Gillespie in the Carlisle goal. 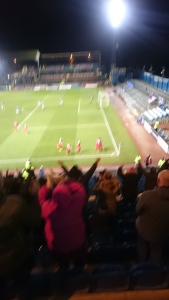 The switch to 4-4-2 put Orient in the driving seat with Sammy Moore going within inches of putting the away side ahead but his fierce volley flew just wide from outside the box. Kevin Nolan continued to search for his 100th league goal after putting two key chances over the bar. However the Carlisle still remained after Halam Hope’s cross evaded everyone inside the box. 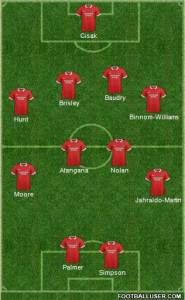 With Jay Simpson having a strike partner, Orient looked far more likely to add to their tally with the pair linking up well in attacking areas. Jahraldo Martin was providing a useful outlet on the break and after a good move from the O’s, Nolan cured over from  just outside the box.

With both sides looking to be in the play off mix come the end of the season, the game was being played at a frantic pace. Carlisle still looked very capable of grabbing a second but two wonderful blocks from captain Mathieu Baudry prevented Ibehre and Rigg respectively. Following the blocks, Orient broke quickly and after Ollie Palmer picked the ball up on the right wing, he skipped past Mark Ellis and made his way into the box. Palmer looked up and finished low under Gillespie to send the 179 away fans into delirium in the corner.

Orient began to sit back after going ahead and still looked a threat on the counter attack with the hosts looking to draw level. Jahraldo-Martin, Simpson and Palmer looked a threat but chances went begging for the away side. Baudry blocked brilliantly again after Rigg let fly inside the box however Orient did concede just two minutes later. Carlisle had gained 11 points in the final 15 minutes of matches before last night and made it 12 as Michael Raynes headed home. Following a quick throw on the left, Alex Gillead crossed wonderfully to the unmarked Raynes who headed home from inside the six yard box.

With the game in the final 10 minutes, both sides looked for a winner. Atangana fired over while substitute Derek Asamoh and Jabo Ibehre had shots blocked for the home side. In a pulsating second half, Atangana could have snatched it right at the death but dragged his effort wide as both sides had to settle for a point.

Respect the point, I would have taken one before the game and certainly at half time. Orient were very poor in the first half, lacking any invention in attacking areas with Nolan getting the set up wrong. Yes, we won at Portsmouth playing 4-5-1 however that works when you have pace on the wings and can counter attack. Despite having five men in midfield, Orient struggled for large periods to retrieve and keep possession in the first half.

Is Simpson a lone striker? Well, I am not a footballing expert but Simpson always plays better with a strike partner. Long balls to a forward who is being marked by four men is always going to provide more negatives than positives. Carlisle were nothing special but Orient were allowing them the freedom to play football on the biggest pitch in the league.

Orient should have been further behind at the break following chances for Wyke but the game plan in the first half was to make sure it was only 1-0 at the break. Credit to Nolan he had the bottle to change the formation and personnel at half time and boy did it nearly prove dividends. Sammy Moore is Orient’s most consistent midfielder which surprised most fans with Moore on the bench at the start.

Moore and Ollie Palmer changed the game and must have staked a huge claim to start against Luton on Saturday. 4-4-2 simple isn’t it, well on the second half evidence you would think so. Palmer helped the ball stick in attacking areas and provided a great foil for Jay Simpson. Simpson grabbed the equaliser and the momentum was fully with Orient and they took a deserved lead. Palmer divides opinion but you cannot dispute his work rate and passion for the game. A wonderful piece of skill from Palmer put the away side ahead but the question remained, Would Orient be able to hold out?

In the end they weren’t able to, it was a wonderful cross into the box but the marking was very poor. Orient had chances to win the game and on another day could have had several more but in the end, Respect the point. A tale of two halves and where substitutions changed the game, something you have to give Nolan credit for.

Most people would have taken a point away at Carlisle but the dominance in the second half sent me home with a feeling of, what if. Luton at home on Saturday, a win would make it 10 points from the last 12 available and keep Orient in the play off hunt before a key clash away to Oxford on the 12th March.

It is clear that we have a manager that will make some mistakes but has the ability to change the team when it is not going all to plan. Something which would have not happened under Ian Hendon. Anyway one to tell people in a couple of years, I was there when Ollie Palmer produced that piece of skill. 179 Orient fans made the trip and credit to every single one of them. Why do we do it? Well we were all thinking that at half time but in the end it was well worth the trip.