McAnuff Keeps Orient in the Hunt

Jobi McAnuff pushed Leyton Orient right back in the play off hunt after victory at Oxford United yesterday. The former Reading midfielder slotted Orient ahead with 16 minutes remaining as they continued their unbeaten away form under Kevin Nolan. Mathieu Baudry was sent off in stoppage time after a challenge on Kemar Roofe but the O’s were able to hang on and move into the play off places after the win.

In a tight first half, neither side was able to create any clear cut opportunities. After the break the game opened up more with Orient continually looking dangerous on the break. Sean Clohessy wasted two great chances after blocks on the line but McAnuff popped up 2 minutes later to send Orient away from the Kassam with yet another win. 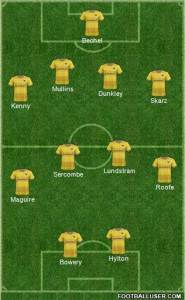 Orient who suffered their first defeat in four last weekend made two changes to their side. Ollie Palmer dropped to the bench while Sammy Moore missed out through injury. Jobi McAnuff and Callum-Jahraldo Martin came into the starting 11 which included Shaun Brisley who had overcome a head injury to play.

In a very slow start at the Kassam, the play was very scrappy with neither side able to gain a foothold on proceedings. Orient had reverted to their traditional set up, packing the midfield and frustrating the home side going forward. Jay Simpson was up front on his own with Jahraldo-Martin playing just behind him however, chances were at a premium at the Kassam.

The home side were trying to find Kemar Roofe on the left when in possession but Nicky Hunt was doing his best to snuff out the threat. Simpson had the first half chance of the game but could only head over a Sean Clohessy cross from the right. With both sides in the promotion hunt, their were nerves on show with lots of missed placed passes in the midfield.

Orient’s main ploy was to try and find Simpson with long balls however it was good built up play which brought the best chance of the half. After a handball on the left by an Oxford man, McAnuff whipped in a free kick. Shaun Brisley headed back across goal but Nigel Atangana’s header was cleared off the line by Jordan Mullins. Roofe fired wide for the hosts but neither keeper was tested in the first period.

The pattern of play was very similar to Orient’s last few away games and the second half started at a faster pace than the first. Orient breathed a huge sigh of relief when referee David Coote waved away the home sides penalty appeals. With Liam Sercombe breaking into the Orient box, Jerome Binnon-Williams challenged but appeared to connect with Oxford man rather than the ball. However Coote awarded a goal kick.

Alex Cisak was forced into a low save from a Kemar Roofe free kick but Orient’s attacking intent was growing by the minute. With the hosts searching for the opener, the pace of Jahraldo-Martin, McAnuff and Simpson on the break was there for all to see.

Armand Gnanduillet replaced Jahraldo-Martin just after the hour mark and should have put his side ahead minutes afterwards. After good play in the midfield, Kevin Nolan played in Gnanduillet who somehow broke the offside trap but his effort was tipped to safety by Buchel.

The away side were clearly in the ascendancy and knew that the game was there for the taking. Sean Clohessy then wasted two glorious opportunities on 72 minutes, McAnuff broke forward and played Gnanduillet in down the left. The Frenchman, beat his man and crossed to the back post where Clohessy stood unmarked with the goal gaping. Clohessy had his tame effort blocked on the line before his follow up flew to safety for the hosts.

However just two minutes later the 800 away fans were able to celebrate as McAnuff stroked home from inside the box. Following another break from deep, Gnanduillet cross field ball found Clohessy who crossed into the box at the second attempt. The ball fell to McAnuff who took one touch before tucking the ball home beyond Buchel to send Orient ahead.

After going ahead, Orient began to sit deeper inviting pressure from the hosts. Oxford wasted their best chance of the match with nine minutes to go when Sercombe was played in but could only drag his shot wide of the far post. Ollie Palmer replaced Jay Simpson with Orient looking to relieve pressure at the back.

As the game ticked into four minutes of added time, Kemar Roofe broke down the left flank. Mathieu Baudry came over a took down to the Oxford midfielder on the touchline, referee Coote wasted no time in brandishing a red card to the amazement of everyone in the Kassam Stadium. Connor Essam came on to see the remaining minutes out as Orient’s fourth away win in their last five moved them back into the play off places.

A typical away performance from Kevin Nolan’s men who keep the roller coaster ride of a season continuing. It is very clear on the format of away matches under the former West Ham man, keep it tight, compact and frustrate the hosts in the first half. Then when the game opens up use the pace on the counter attack and chances will present themselves.

4-5-1 or 4-4-1-1 doesn’t really work with the personnel at the disposal of Nolan however the tactics away from home are getting the results. Orient made Oxford look very ordinary in attack and gave them few chances in the final third. Baudry was very unlucky to be sent off and thought that he had to make the challenge. Orient will appeal but whether or not the card will be rescinded is unknown. My thinking is it won’t and it will be a massive miss for Orient.

When the game opens up, it plays straight into the hands of Orient in the second half. The pace and attacking threat on the break will always present chances to nick a goal. However the O’s nearly blew their opportunities when Clohessy wasted two glorious chances in the second half. It didn’t matter in the end with McAnuff grabbing the winner but is something which Nolan addressed post match with Orient needing to add a ruthless streak to their play.

The question is can Orient do it at home next weekend? It will be tougher as like I have said before Orient are set up to play away from home with the pace on the counter. Orient exploit space away from home in the second half of matches, something which is rarely afforded to them at home. The challenge remains finding a tactic and formation which helps Orient pick up results at home.

The play offs are in sight but as many have said Orient’s season can be summed up in two words: consistently inconsistent. If Orient put a run of wins together they will be in the end of season lottery and with teams in the mix playing each other and dropping points – a run of form will cement a place in the play offs. Currently if Orient did make the play offs, I would feel more confident having the away leg second. Odd? Why? I think Orient are more capable of getting a result on heir travels than at home. It may change, you never know.

Morecambe at home next weekend and we will wait to see if Baudry’s suspension remains if not it appears that Nicky Hunt will move to center half. Whatever the outcome of the season, Nolan has added steel in the defence. The play is not pretty but picks up results, something which was opposite in the first half of the season.We will see where the season takes us next weekend, all we know is Orient never fail to go on a rocky road.