“The Players are Hungry and Ready for the Real Stuff”

Leyton Orient boss Andy Hessenhaler knows the importance of hitting the ground running ahead of their league two curtain raiser at Cheltenham tomorrow. The O’s  finished outside the play off places last season and  will be looking to secure a return to League 1 this term.

Hessenhaler was appointed in the summer on a permanent basis after moving up from assistant manager to Ian Hendon and Kevin Nolan. Speaking to leytonorient.com ahead of the game “We started well last year and got off to a great start. It is important to hit the ground running and gain that momentum from day 1″. 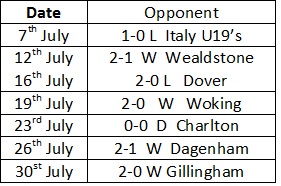 Summer addition Tom Parkes understands the test that Cheltenham will pose tomorrow having been in exactly the same position last season. Parkes moved to the capital after gaining back to back promotions with Bristol Rovers. Speaking to leytonorientcom ahead of his league debut tomorrow “they have just been promoted from the conference so there will be a buzz around the place. They will want to try and get off to a flying start just like us but we have got to go there and focus on getting the three points”.

Parkes joined at the start of July and feels comfortable in E10 “it always takes a bit of time to get used to new surroundings but I feel have settled in well and all the new players have gelled as a team and think over pre season it has been evident”. Parkes was one of nine summer arrivals in East London as Andy Hessenhaler looked to build a challenge for promotion.

Midefielder Nigel Atangana completed his first pre season at the O’s after a January move from Portsmouth and is relishing a return to a happy hunting ground. Atangana, who spoke to leytonorient.com last weekend “I have some very good memories against Cheltenham having scored their when I was at Portsmouth. We are looking forward to the game and we have to start well”.

With a sickness bug running through the Orient camp, Atangana could seize his opportunity in central midfield, “if we are missing a few players through injury or illness, we have to stick together because we all want to go in the right direction”. He added “it will be the first test of the season and it will be a tough one at the National Conference Champions. I am now confident for the first game of the season and the lads are raring to go”.

Opening six games of both sides

Cheltenham midfielder Harry Pell is relishing a return to playing in the football league after a season away. Pell penned  a two year deal for the Robins last summer with the ambition to be playing League football within a year. Speaking on the eve of tomorrow’s game to Robinsplayer “we know how important the start of this campaign is, most importantly I want a good year for me and the team”.

Cheltenham ended their pre season campaign with defeat to Bristol Rovers last weekend, in a performance that Pell described as “unacceptable”. The Robins midfielder added “it has been a little frustrating pre season, with negativity comes an attitude to put it right. We have put a lot of hours in this week leading up to the big game and am sure by three everybody will be ready to go”.

Striker Danny Wright has waited all his career to play in the football league and is excited about the prospect tomorrow. Wright had spent season after season in the non-league before gaining promotion last season and is sure that his teammates can replicate their last season form. Speaking to robinsplayer “We feel good to go this weekend, the boys are confident, we definitely have what it takes to be as successful as last year – that is definitely the aim.

An important factor for Wright is to keep the “togetherness” of last season, “everybody said it the togetherness around the club was a massive help to help us win the league. We have kept the nucleus together which is important” However, manager Gary Johnson was left frustrated by his summer transfer dealings, with clubs failing to deliver in their promises.

Johnson spoke to robinsplayer yesterday “we waited for certain players for a long time but unfortunately there were unable to come. So we had to quickly adapt, a couple of lads came in today”. Johnson has set his target on the opening 10 games to assess his sides start, “I think you need a good start anyway, August and September is 10 games. You just want to be up there with the challengers, we know the importance of getting a good start. We have a difficult start but we have earned the right to be here”.

The Robins bounced back as Champions last season with a big helping hand coming from their prolific striker force of Wright and Dan Holman who scored 52 of their 87 league goals. Wright knows that with competition for places in attack is key for to replicate what brought that success last season. “There is definitely goals between us, we need to make sure we are doing what brought us the goals last year. Competition breeds success, we are hopeful we can take the performances into the lead and upset teams”

Gary Johnson revealed that Aaron Downes and Jack Munns have both been ruled out of tomorrow’s clash whilst James Dayton will face a fitness test. Johnson could include all new signings Danny Whitehead, Daniel O’Shaughnessy, Easah Suliman and Russell Griffiths. However Kyle Storer remains suspended after a biting incident at the end of last season.