Smash and Grab at Sea

Second half goals from Liam Kelly and Ollie Palmer sealed back to back victories for Leyton Orient. The O’s weathered a first half storm from Grimsby where visiting keeper Alex Cisak pulled off three fine saves to prevent the home side from taking the lead.

Orient took the lead against the run of play when home keeper James McKeown presented Liam Kelly with an easy finish 10 minutes into the second half. Grimsby began to leave spaces at the back in search for an equaliser however another mistake from centre half Josh Gowling presented Ollie Palmer with a one on one which he duly tucked away.

With time epping away second half substitute Dominic Vose’s deflected strike pulled one back in injury time but Orient hung on to move up to fourth.

On the back of their 3-0 win against Tuesday against Stevenage, Orient made one change with Jordan Bowery coming in for the injured Jay Simpson who missed out with a back injury.

Grimsby who were on a run of three successive away defeats made two changes from their defeat to Colchester on Tuesday. Returning Craig Disley came in for Tom Bolarinwa who dropped to the bench while Shaun Pearson came in at centre back for Andrew Boyce.

Following a slow start from the visitors the home side seized the initiative and were pressing on the front foot. Indecision in the O’s backline saw the ball fall to Omar Bogle who saw his effort smothered by Alex Cisak.

Grimsby continued their search for an opening goal when James Berrett seized on a miss placed pass from Sandro Semedo but the Grimsby winger saw his effort saved. From the resulting corner midfielder Craig Disley glanced his free header wide as Orient continued to look shaky at the back.

As the game began to settle down, the O’s still looked second best to the home side where penalty appeals were waved away after Omar Bogle tumbled under a Sandro Semedo.

Orient were second best all over the pitch and were thankful for Alex Cisak in their goal. Bogle wriggled free inside the box with his goal bound shot seemingly destined for the top corner but Cisak tipped the effort wide.

Orient struggled to create going forward with a mistake nearly presenting them with the opening goal. After Nigel Atangana found Jordan Bowery in the right channel who’s cross was deflected off two Grimsby defenders over the bar.

The Mariners continued to create going forward when left back Danny Andrew produced a wonderful cross from the left but striker Kayden Jackson could only fire wide at the near post. Ex Orient midfielder Luke Summerfield was next to test Alex Cisak but the Australian shot stopper kept the midfielder at bay.

Half time came at the right time for the away side however Grimsby still remained in the ascendancy at the start of the second half. Cisak continued to be in fine form in the Orient goal saving from Jackson at his near post before James Berrett wasted a glorious chance at the back post. Following a good move down the left by the hosts, Ashley Chambers cut in from the left whipping in a delicious ball to the back post where James Berrett glanced his header wide. 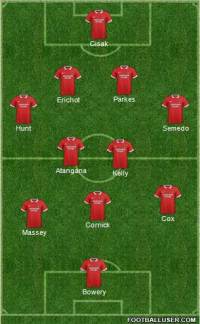 Orient moved midfielder Harry Cornick into more of a central role in the second half with the move almost having the desired effect 9 minutes after the interval. Collecting the ball midway inside the Grimsby half, Cornick released Gavin Massey down the right who saw his teasing cross deflected agonizingly wide of the far post.

Orient took the lead just a minute later and there was more than an element of fortune with the goal. After Jordan Bowery skipped clear down the right, as he reached the by line he crossed to the centre. Home keeper Jordan McKeown looked to have claimed the cross however the ball went loose to the on rushing Liam Kelly who touched home from one yard out.

After scoring against the run of play, the goal seemed to push the away side on more with Bowery nearly scampering clear but a last ditch challenge prevented the O’s striker from getting a shot away. Orient wasted a glorious chance when Dean Cox’s drilled corner found an unmarked Tom Parkes who glanced wide from six yards out.

Bogle still provided a threat for the home side and should have drew level when the ball fell loose in the box but the front man fired wide from inside the six yard box. As the game entered the final 20 minutes, Andy Hessenthaler threw on Ollie Palmer in place of Dean Cox to try and stretch Grimsby’s back line.

With the home side pushing for an equaliser, spaces were left at the back which resulted in Palmer wrapping up the points sending them back to East London. A hopeful ball forward to Palmer was misjudged by Josh Gowling at the back which presented the O’s front man with the chance. The former Grimsby striker broke free, finishing low beyond James McKeown and celebrating with the O’s away fans behind the goal.

The second goal seemed to kill off the home side who saw Ashley Chambers’s effort smothered by Cisak in the Orient goal before the traditional “Orient are making hard work for themselves”. As the game entered added time, substitute Dominic Vose’s deflected shot looped over Cisak, pulling one back for the home side. However the O’s saw out the remaining minutes to seal back to back wins, moving them up to fourth.

Don’t let the score fool you, a win is a win and you will take one any day of the week but Orient had to be very thankful of keeper Alex Cisak. Orient’s no 1 produced a string of fine saves in the first half to keep his side in the game. Orient were second best for all of the first half, losing ball in midfield and looking lost for ideas in attack. The attacking trio of Massey, Cornick and Cox, looked ineffective when attacking however attacking was very limited.

However the fact remained that the score remained 0-0 with Grimsby wondering whether they would rue their miss chances. Indeed they did in the second half where two mistakes were punished by the away side. I don’t think Orient will be presented with two easier goals all season but who cares; you will take them all day long. The first a cross dropped on the goal line to Liam Kelly to tap home then a defender missing the ball gifting the ball to Palmer who slotted home.

The Simpson saga continues with the front man missing with a “back injury” but was at the ground to watch the game. With Gnanduillet gone to Blackpool and McCallum’s absence from match day squads still a mystery to everyone in attendance, what will the next episode bring?

Two wins from two this week with two performances at the opposite end of the spectrum. Tuesday’s performance was very encouraging on the eye with the today’s vastly opposite but a win is a win. But how many times has it happened to Orient in recent seasons, have countless chances in a game then two mistakes cost them the game. Orient were clinical with the two chances that were gifted to them.

Fourth in the table before Mansfield at home next weekend, the question remains will Simpson be available, fit, still at the club or gone? With only Ollie Palmer and Jordan Bowery named strikers in the squad, will we see some movement in attacking areas before the window shuts?

Who knows when it comes to Leyton Orient, all I know is away days are made so much better when you grab an undeserved victory. Onwards and upwards to Mansfield next weekend.