The Hatters – The Inside Look

Jones was appointed in early January 2016 after moving from first team coach at Brighton. The Welshman has relished his first managerial role at Kenilworth Road and with a summer of recruitment, the signs appear that Luton are ready to challenge at the top of the table.

Jones described Luton as “Playing our way” a style of play which he has tailored from his influences throughout his career. Speaking in his first interview as Luton manager to lutontown.co.uk he spoke about how his career developed and his movement into coaching. Jones spoke about taking snippets from the managers he has worked alongside such as Chris Hughton and Oscar Garcia.

Jones spoke about how his style of play suits Luton Town and their philosophy, he described his style of play “play with a tempo, pass the ball quickly, be good to watch, create chances and win football matches”.

It is clear that Jones’s style has been implemented at Luton with the preferred formation a 4-4-2 midfield diamond with the full backs providing the width in his side. Jones’s side look to find intricate and incisive passes in the midfield. 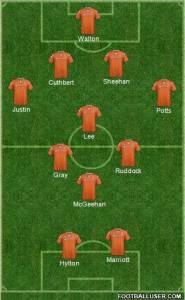 The diamond allows overload in central areas with the midfield 3 (Gray, Ruddock and McGeehan) the license to push forward and go past the two strikers. Lee offers protection in front of the back, to allow the attacking players to create chances and score goals. The two (Gray and Ruddock) are energetic and like to push forward.

Luton (orange) have a clear set up. The back four with the midfield diamond in front of them.

Gray looking for the ball over the top of the defense

Luton’s goal vs Crewe, Ruddock’s ball over the top finds Gray. He squares to Hylton  to tap home

Jones’s teams like to play out from the back with the full backs providing the width, allowing Lee to pick the ball up and look to find the midfielders in attacking areas.

According to Luton’s philosophy “Players are required to play with good quality from wide areas and deliver the ball into the box when the opposition prevent entries from central areas. We encourage a Full Back to join in late and fast at every opportunity to create maximum width during attacking phases”

With the midfield overloaded the space when the opposition cannot be penetrated is wide: 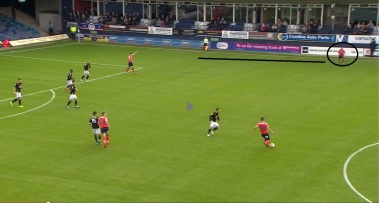 Problems with the Diamond

When teams play the the diamond midfield, the space for both sides is on the wings (full back for team playing diamond and the wingers for the opposing team). The full backs provide a key role in both playing the diamond and against the diamond.

Vs Cheltenham, all four midfield are very narrow, with Cheltenham having space to exploit wide 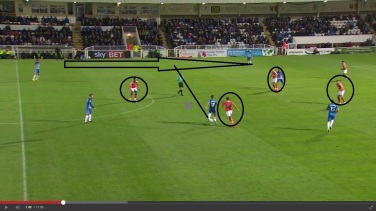 Vs Hartlepool, width allowed for both winger and full back to create 2 vs 1 situation

vs Crewe last weekend. Goal – the switch of play in the center created 2 vs 1 situation on the right. the winger crosses to the back post where man unmarked to score

However, if the diamond needs to be tight in order for the angles for passing to be created. Against Grimsby, if the diamond is too wide, there is space to exploit in between the midfield four:

Set pieces  – As per the academy philosophy “In this phase we try to encourage the players to be creative with Set Pieces and vary the outcome. We continue to instil an ideal of “can we” play quickly where possible but looking to test ourselves with more inventive ideas to result in more successful outcomes. We look for players in this phase to make better and more clinical decisions, particularly around the penalty area and taking into consideration the elements and conditions that are “on offer!” http://www.lutontown.co.uk/documents/academy-philsophy175-2077478.pdf

Here are there set pieces and different routines they have used this season – including one they used to score against West Brom U23’s recently: Set Pieces (click link)

Luton Town are the league’s second top goal scorers with only Doncaster (25) scoring more than them (21). The striking partnership of Jack Marriott and Danny Hylton have netted 0 of their 21 goals in the league this season.

The pair are different strikers but have the same impact when Luton are breaking and playing on the counter attack.

The pair split, allowing the option for the man in possession

Luton’s top scorer is always on the move in the penalty area, looking for a loose ball. Anticipation is key for Hylton who scored last weekend against Crewe with his movement inside the box. All of his 7 league goals have been scored inside the box and has the ability to be in the right place and the right time.

Vs Wycombe – Hylton anticipating the loose ball in the box. Always on the move and first to strike if the opportunity arises

He plays on the shoulder of the last defender utilizing his pace to punish high defences. Marriott is short and has a low center of gravity enabling him to pick out positions in attack. The striker likes to pick up positions in the channel between full back and center half, for the slide ball to run on to and score.

Alongside the front two, Cameron McGeehan is key to Luton Town. The midfielder has scored 5 goals already this term and loves to make a late entry into the box from a cross from the full back or wide areas.

McGeehan’s run vs Doncaster, helping him grab a goal

Luton will like to have large spells of possession but it is key for Orient to stay compact and prevent space in central areas. Playing a high line is dangerous with the pace of Marriott in behind. The wingers and full backs will be one of the key elements for Leyton Orient tomorrow. The counter attack can be a key area for attack for Orient with the wingers exploiting the space wide left by the midfield diamond.