Crewe Alexandra – The Inside Look

Crewe Alexandra arrive in Leyton tomorrow in 12th position, just a point outside of the play offs. Alex are without a win in their last seven games but will be seeking to end that sequence at Orient tomorrow.

Crewe will be looking to bounce back to League One after suffering relegation last season. Manager Steve Davis recruited well in the season to blend together some youth and experience in search of promotion.

Last Weekend – 1-0 defeat to Yeovil. A Matt Dolan free kick was the difference where Crewe were the better side but failed to put their chances away. 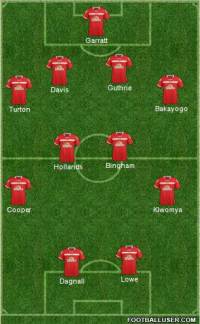 Steve Davis has favored the 4-4-2 system, the old fashioned two strikers and two wingers who can cross the ball from wide areas. Ryan Lowe and Chris Dagnall are experienced lower league strikers who know their way to goal and how to finish. The additions of the tricky and pacey wingers in George Cooper and Alex Kiwonya give Alex a threat going forward. 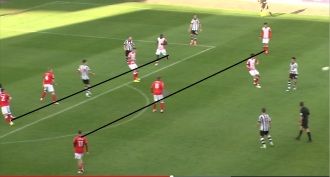 Two banks of four against Notts County away 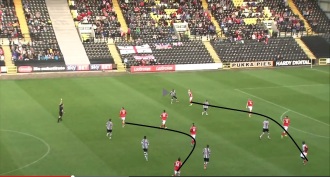 Set up at Notts County 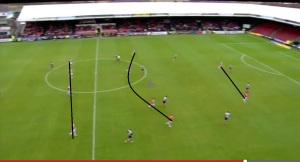 Crewe like to pass the ball around and play nice football, according to Davis “we are good at exploiting the gaps that teams leave us” crewealex.net

The full back’s like to stay wide and attack forward from their deep position and provide a useful outlet when the wide men come more central. 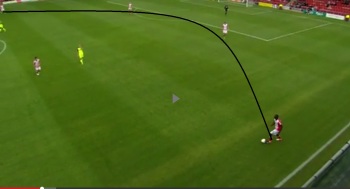 Ryan Lowe and Chris Dagnall (click link for highlights from this season)  are an old fashioned partnership in attack, with them both looking to go in behind defences to create chances. Lowe is a clever player who links very well with Dagnall. The pair are a nuisance to opposition defences and will look to sniff out a error from their defenders. 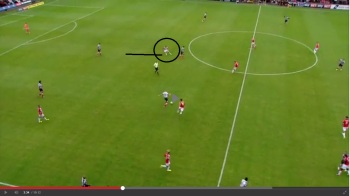 Dagnall at Grimsby, pressing to win the ball back and set up the opening goal. 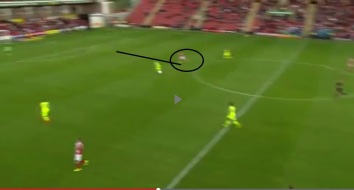 Dagnall on the last defender at home to Exeter

One of the main youngsters on loan at English Football League Sides from Chelsea. The winger is Crewe’s top scorers this term with five goals already to his name in the league. The 20 year old has been playing wide left for the majority of the season and has the ability to play centrally or just behind the striker.

Davis stated to BBC Radio Stoke that the club are looking for another winger so it gives them the option of playing Kiwonya through the center, “We’re hoping to keep Alex beyond January but we’d like another quick winger to enable us to play Alex up front if we need to, to give us that threat” 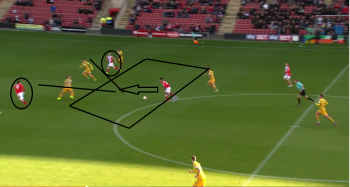 Kiwonya drifting from his left wing, centrally and playing between the lines 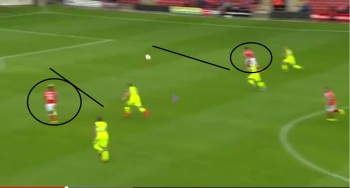 Alongside Kiwonya, George Cooper plays on the other wing and play on the unconventional wing. Cutting in onto their strongest foot to whip in balls into the box for Lowe and Dagnall. Cooper has a great left foot and his adept and finding Ryan Lowe in the six yard box. 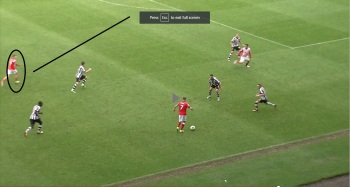 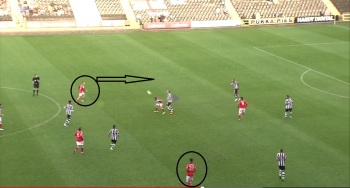 Cooper cutting in on his favoured left foot

With Crewe liking to attack and commit full backs forward, there is space to exploit behind the Alex defense. Crewe have conceded several goals with balls played over the top of their defense with the opposition having a runner from deep. 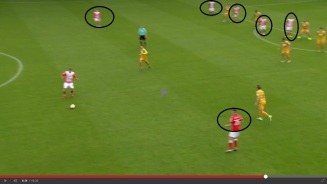 7 men ahead of the ball, danger of the counter attack

As previously stated the wingers like to come central onto their stronger foot which can help when attacking but can be a problem when out of possession. Consistently throughout the season, Crewe have allowed opposition teams to cross the ball into the box with the wingers or full backs not closing down the space enough. 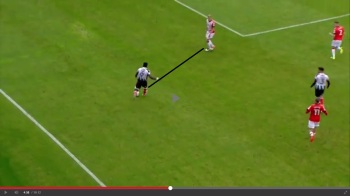 After the defeat to Yeovil last Saturday, Manager Steve Davis spoke to crewealex.net about changing system in the second half to try and get back into the game, “changed to a diamond to try and get Alex (kiwonya) in a different position and attack, with the full backs providing the width and keeping just Danny and the two center halves deep”. 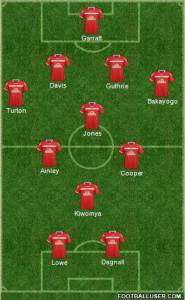 Change to a diamond vs Yeovil 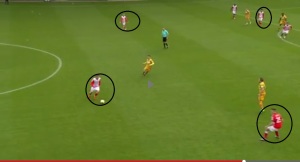 Midfield diamond, in their positions

Speaking earlier in the week more Davis added “we are looking at another way of playing, we need to find a way of getting around defenses if the opposition go 1-0 up. It is something we have looked at and how we can break them down. Most teams in the league go ahead and camp out making it difficult for us with all behind the ball. We are now finding a different way whether it is the players or system to gain an advantage” crewealex.net

Davis added “we have looked at a system that still keeps 2 forwards on, the diamond allows us to do that. We get the width from the full backs which leaves just the 2 center backs and the deep midfielder back allowing seven to attack, get forward and in the box” Crewealex.net 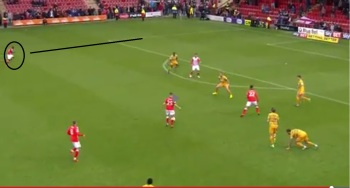 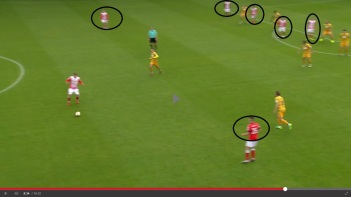 Davis continued “Or we used to play a 4-3-3 which leaves three up and we did that successfully over the last 4-5 years. We need different ways to play, once teams have seen you play and worked you out. If they get the first goal it become difficult, when we get it it helps us we exploit the gaps teams leave behind them” 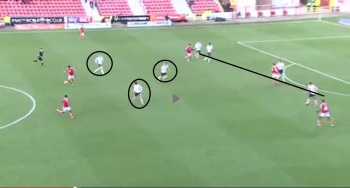 4-3-3 vs Swindon last season, back four and midfield 3 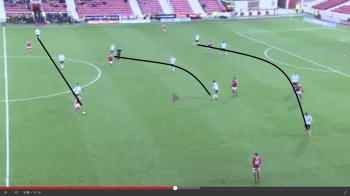 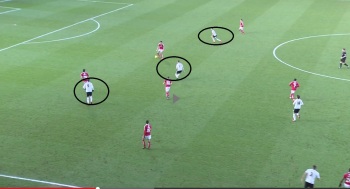 1 Response to Crewe Alexandra – The Inside Look