Blackpool head to Brisbane Road tomorrow sitting in 9th position in League Two. In what has been a testing few years for the Lancashire club which has seen them fall from the Premier League to League Two in six seasons.

Following back to back relegation’s, the Tangerines are looking to bounce back to the third tier of English football. Blackpool appointed Gary Bowyer as manager in June, earmarked to turn around the Tangerines fortunes.

Bowyer who was sacked by Blackburn back in November 2015 took the job and the club has been upwardly mobile so far this season.

Sitting just a point outside the play offs places, the mood around Bloomfield Road is good on the pitch while the Oysten family still create a bad mood off it.

So Far this season

Blackpool have been free scoring all season with the Tangerines the third highest scorers (27) in the league behind Plymouth (28) and Doncaster (33).

Bowyer highlighted on his arrival back in June that he needed “address the issue about pace and power in the side” Blackpoolfc.co.uk.

The one major sticking point for Bowyer’s men has been their poor away form which has seen take just 6 of their 21 points on their travels. They will certainly be wanting to add to that tally at Orient tomorrow.

Bowyer’s side tend to opt for a traditional 4-4-2 system but the two wide men in Brad Potts and Colin Daniel are given license to come in field. They make runs from out to in to almost at times make it a 4-2-4 formation when attacking. 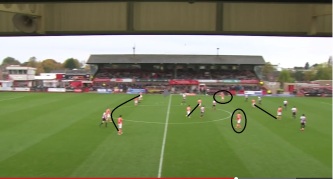 Away at Cheltenham, Potts and Daniel are high and inside looking to support the front two

Last weekend at home  to Notts County. 4-2-4 with Potts and Daniel high in attack.

The presence of the wide men  inside creates extra men in the middle of the pitch allowing the two full backs to venture forward especially Kevin Mellor from right back who already has netted twice from full back pushing up high.

Daniel with the ball inside, the space on the outside for Mellor to attack into

Midfield all central with Mellor allowed space on the right flank

Even though the wide men like to come inside, they also have the ability to burst down the line and drive at the opposing full back. Bright Osayi-Samuel is a big threat driving towards the byline and whipping in crosses.

Brad Potts has been known in recent years for playing in central midfield but when Bowyer was appointed he saw a different position for him. Stating to blackpoolfc.co.uk “I have known Pottsy for a long time and he has a good habit of getting some goals. I want to try and get him in a more advanced position for him to get some. We’ve got to try and get the best out of them and play them where we think they can do that”

Potts played throughout pre season in a wider role and relished the wide berth given to him, “I came to the club as an attacking midfielder and that’s what I want to be in the team. I feel I need to be further forward to have more of an influence on the game”

“Out wide, rather than in the middle, I feel I’ve got a bit less responsibility to defend and more freedom to play” Blackpoolfc.co.uk (following their 1-1 draw with Bury in pre season)

Potts’s runs forward  in between the full back and center half cause opposition defenders all kinds of problems. He stated “that’s the run I’ve been trying to produce, coming in off the line”

Potts making the run vs Doncaster earlier in the season

Potts’s run at Cheltenham away, with Daniel inside providing the through ball

Along with this runs forward, Potts has been an integral part of Blackpool’s form in the early part of the season. Netting five goals already with three assists, he is the Tangerines second highest contributor of goals.

Potts’s threat also comes when he drifts in between the opposition midfield and defence, which makes it hard to pick up as a defender.

Potts vs Kidderminster in the FA Cup

Potts in the space creating his sides goal vs Barnet

The striker who was signed from Peterborough in the summer has been a revelation at Bloomfield Road already netting 10 goals in 17 matches in all competitions this season.

The front man has been integral to the Tangerines free scoring nature in League Two with the former Posh man happy to be playing in a consistent side.

On his arrival in the summer he stated “I have lacked a run of games in recent years, hopefully the gaffer and I can go well. As a striker it’s all about regularly scoring goals and putting in consistent performances” Blackpoolfc.co.uk

Vassell offers a threat in behind the opposition defense with his pace and power. 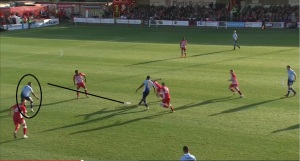 Anticipating danger playing on the shoulder of the last man

Vassell is a clever striker who identifies where the space is, he can go in behind but also can drop short for the ball then spin into the space behind.

Counter Attack and men in support

With the pace and power from the front four in attack, Blackpool can be devastating on the break for the opposing side with Jack Payne stating on Thursday to blackpoolfc.co.uk “we have got pace and power withing the front four, any time we can clip one in there we know we are going to get something. When we counter on teams it is so hard to stop”.

Men willing to support the man in possession

The front four given license to attack 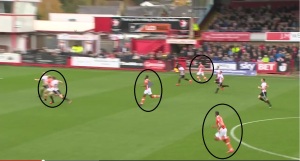 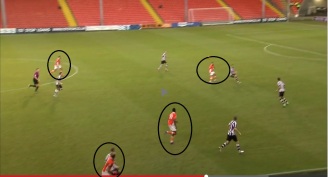 On Gary Bowyer’s arrival he stated in his first interview “I pride myself on teams that are very hard working, competitive and that play attacking football. Through my time at Blackburn with the likes of Rhodes and Gestede scored loads of goals and we got the ball in the box. That is exactly what we’ll be looking to do here”.

The press from Blackpool starts from the front with Vassell starting it early and his team mates joining in. Vassell’s pressure last weekend, helped him gain a goal with Bowyer highlighting that it comes from the whole team:

“At right times we want to press and press hard. It is a collective, the whole group who have been doing it not just Vassell. We are pleased with the energy levels at the moment”.

Press vs Cheltenham away 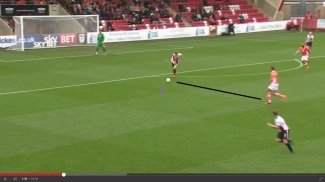 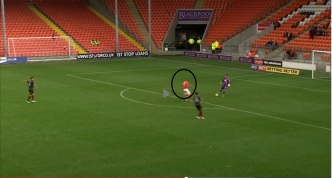 Stopping the easy ball out

Blackpool recent have gone three games unbeaten in the league with  Bowyer naming the same side throughout. In attack, Kyle Vassell has partner Jamille Matt with Bowyer describing to the press on thursday “I don’t know which one I would want to mark or play against. They both present problems for defenders in different ways”.

With all their attacking threats going forward, Bowyer has been able to name a settled back five including the keeper of Sam Slocombe

In fact the back four consisting off – Kevin Mellor (RB), Tom Aldred (CB), Clark Robertson (CB) and Andy Taylor (LB) have started 75% of their league matches (12/16 games and four of their last five)

An issue for Blackpool has been conceding goals especially away from home. They have only one clean sheet in 11 games on the road this season.

Runners from deep against Blackpool has been a major problem along with leaving men unmarked with in the box. They will be space given to Orient tomorrow with the attacking threat and space the will leave behind them.

In fact four of these have been direct free kicks at goal with the Tangerines posing a threat from outside the area.

Blackpool have also used quick free kicks or routines this season, with a quick free kick equalising at home to Doncaster a couple of weeks ago. On nearly all of these occasions Brad Potts is involved so will need to be watched tomorrow – check out