After going agonizingly close to achieving promotion last season, Accrington have found life in League Two more difficult this term. With a poor recent run of form Stanley have been sliding down the table, sitting just two points above the relegation zone.

Progressing through to the third round of the FA Cup last weekend with a 3-0 win at Woking, manager John Coleman will be looking for it to be a springboard for his side in the league.

Without a league win in their last six, Stanley have struggled to pick up points this term especially away from the Crown Ground.

A major problem for Stanley has been their poor away from picking up just nine points from a possible 27 available. 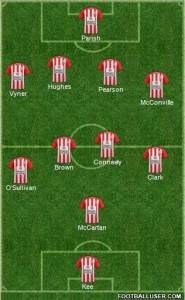 Coleman tends to play with just one striker in attack either Terry Gornell or Billy Kee with an attacking player sitting slightly deeper in the no 10 role. However, the attacking qualities of the squad the system can be interchangeable either 4-4-1-1 or 4-1-4-1.

The furthest forward midfielder (McCartan in recent weeks) will look to get into positions between the opposition’s defense and midfield.

McCartan in position vs Newport County

Stanley have struggled to score away from home this season and are currently the lowest scorers on their travels in League Two. However they will always offer a threat down the wings with the wide men very tricky in attack.

John O’Sullivan and Jordan Clark are very direct looking to attack their full back when they receive the ball in attacking areas. Both are very good at committing defenders, looking for a pull back to either Kee or Gornell in the center.

O’Sullivan crossing for Kee vs Colchester

Full back overlapping at Wycombe

With interchange in attack and the willingness to attack, Stanley can press teams high up the pitch forcing mistakes. It has proved it’s worth so far for Stanley who have creating opportunities from pressing the opposition.

The presence of Billy Kee and Terry Gornell is very important to Stanley when attacking. Both front men provide a physical presence against the opposition, holding up the ball, laying off to runners from midfield.

Kee’s form last season was integral to Stanley getting so close to achieving promotion. 17 goals in 51 games last season was important but his hold play and ability to play upfront on his own.

The ability of Kee to win balls in the air allows the midfield of Stanley to gamble on the second ball. When the ball is played forward, Kee or Gornell has options of who to flick or lay the ball off to.

Four in support of Gornell vs Stevenage

Gambling on the second ball

The threat of midfielders running beyond the striker will cause the opposition problems along with the pace that Stanley offer on the counter attack. Accrington can be lethal if a team commits too many men forward.

With the interchangeable midfield going forward, Stanley can be caught on the break with teams running at their back four. The defense can drop deeper, which creates an area in front of the defence which teams can exploit.

Stanley can also be susceptible to long balls forward which turns their back four towards their own goal. Against Morecambe earlier in the season Mark Hughes was sent off after being caught out by a long ball forward.

Too Tight,ball then played behind them into space

Accrington completed the double over Orient last season, winning both games 1-0. The games were settled by runners behind and use of Billy Kee as a target man.

Josh Windass running in behind the O’s defence

Billy Kee laying off for Scott Brown to fire home