Wycombe, one of the in form sides in League Two, head into tomorrow’s clash with Leyton Orient looking for their eight straight win. The sequence of wins has pushed Gareth Ainsworth’s men into the play offs and with a hectic festive period, the Wycombe boss will be hoping his side can continue their form.

Wycombe started the season slow picking up just five points from their opening six league matches, sitting 22nd in League Two. However, the Chairboys soon picked up form and are now flying up the League Two table after another win last weekend, 2-0 away at Notts County.

Since the 9th September, Wycombe have taken 26 points from a possible 42 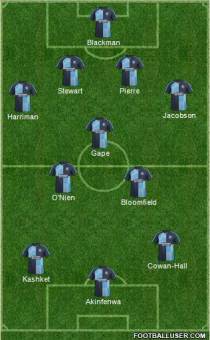 Wycombe change in fortunes and from has come from Gareth Ainsworth finding a formation that suits his players. In their 2-0 win over Hartelpool, the Wycombe boss moved to a 4-3-3 formation to combat their approach, it worked and he hasn’t looked back.

The system is helped by Ainsworth consistent team selection with the nine of the 11 starters being named in six of the last eight matches in all competitions.

In fact after Paul Hayes missed last weekend’s win, 10 of the 11 starters at Chestefield in the FA Cup 2 weeks ago have been named in 5 of the last 8 games. 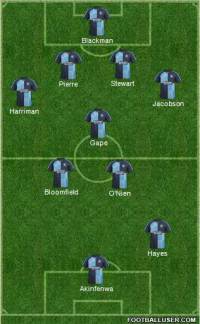 The back five of: Jamal Blackman, Michael Harriman, Aaron Pierre, Anthony Stewart and Joe Jacobson have started 11 of the last 16 matches. 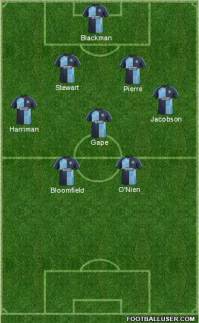 The back four works closely with the midfield which helps give them protection with either one or two deeper midfielders. The eight names above have started six of the last nine games together.

Unfortunately for Wycombe they will be without forward Adebayo Akinfenwa after he was sent of last weekend at Notts County. In the new 4-3-3 system, Akinfenwa was the focal point with Paul Hayes and Scott Kashket (recently) the foils off of the striker. 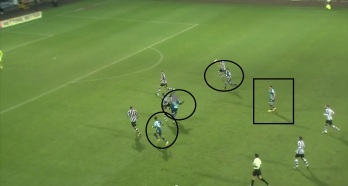 The former Orient striker will be looking to haunt his former club tomorrow after making the summer switch from East London in the summer. Kashket was initially signed on a short term deal but after netting nine in his opening eight games, including an FA Cup hat trick, he was quickly offered a deal until 2019.

The 20 year old is small but very quick on his feet and looks to run in behind defenses. Kashket spoke to the football league paper just last week stating “I am very pleased with how things are going right now and I couldn’t be happier. Since coming to Wycombe, the boys have all been really welcoming and the manager has been great with me”

“He plays the way I want to play, where I start out wide and am able to come inside which has been working so far”. 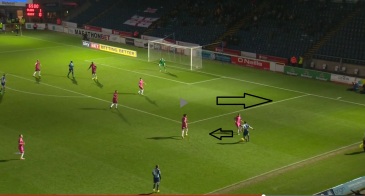 Kashket moving inside to create a shooting opportunity

“I am one of those players who gets more confident the more I score and with Christmas come up and a lot of games, it is a good time to go on a streak”.

Kashket will offer a major problem to Orient’s backline tomorrow with his low centre of gravity and his willingness to drive forward and behind defenses, alongside his speed he is a real danger.

The 32 year old midfielder is enjoying his 12th season as a Chairboy after signing a one year contract extension in the summer. The midfielder made his 400th appearance earlier this season and has played 24 times for the club this season.

His experience and knowledge of the game helps the Chariboys no end in the middle of midfield. The midfield has played in a attacking role this season and has been the first link between the midfield and the strikers in recent weeks. 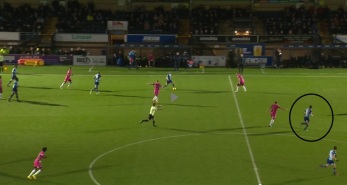 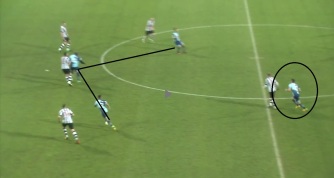 Last weekend at Notts County, just behind the front three

Utilising the striker, Bloomfield looks for the flick or knock down in attack 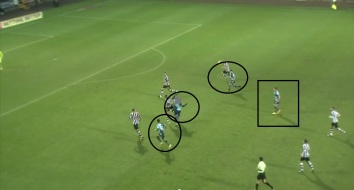 Front three circled and Bloomfield in the space just behind

With the change in formation came a move to a midfield three which is easily interchangeable within game to either a 1 deep and 2 forward or 2 deep and one forward. 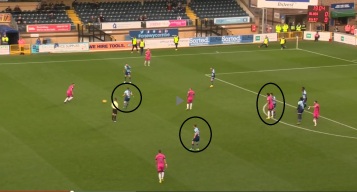 The three midfielder have an abundance of energy to burst from midfield but with the realization that one of them will sit in front of the back four. 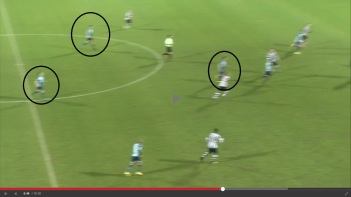 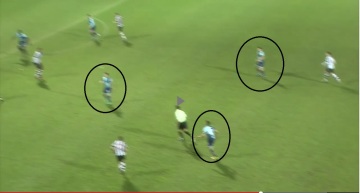 O’Nien and Gape deeper with Bloomfield just in front 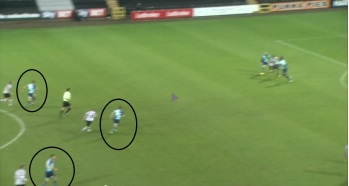 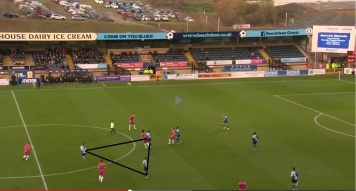 Midfield trio can play quite tight

Running from Midfield and Support

With the energy and confidence running throughout the team, Wycombe like to commit men forward in attack. With the attacking nature of the system it allows the three strikers and two of the midfielders to attack with the backup of cover behind them.

The use of the striker as the focal point allows two of the three midfielders, O’Nien and Bloomfield, to feed of knock down to get the side up the pitch. 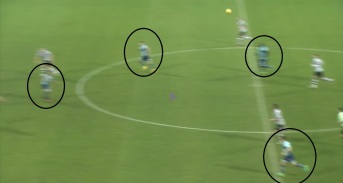 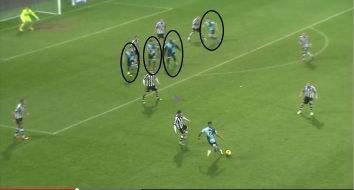 O’Nien and Blomfield forward alongside the strikers

The threat of the midfielders breaking forward causes one problem but with Kashket, Hayes and Cowan-Hall, all three will look to break behind the opposition defense.

Most teams have a dead ball expert in their side and Wycombe are no different with Joe Jacobson taking the mantle. The full back already has four assists this term and his delivery can be very dangerous into the opposition box.

To go alongside the delivery, Wycombe will pose an aerial threat with Pierre, Stewart, Hayes, Thompson all capable of scoring with their head in the box.

In their recent FA Cup game at Chesterfield, three of their five goals came from set pieces. Their second goal was part of a set piece routine where two men ran towards the corner taker, with the ball being hit to the runner from deep.

Gape and Bloomfield drag men towards the ball 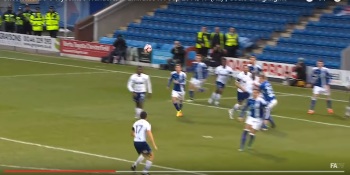 Wycombe recent run has been built on scoring plenty of goals but also the ability to keep a clean sheet. The down side to their 4-3-3 system is it requires either the midfielders or the wide forwards to cover the space in wide areas which is left. The system can be very narrow at times with the space left down the flanks to exploit. 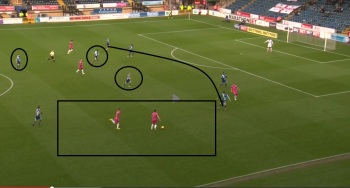 vs Hartlepool, system very narrow, leaves the chance for a 2 vs 1 in wide areas 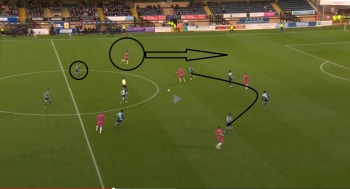 Narrow system, run from deep behind right back 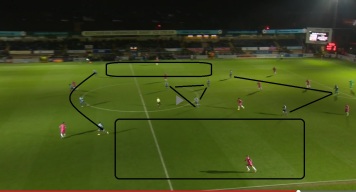 Key Points to Watch out for Tomorrow

Boyhood Leyton Orient fan, but love football in general, any league. Football is my passion.
View all posts by mattbristow271993 →
This entry was posted in EFL, League 2, Leyton Orient, Uncategorized and tagged EFL, England, Football. Bookmark the permalink.