Leyton Otient slumped to their heaviest league defeat of the season away at Exeter yesterday afternoon. The Grecians when ahead after just four minutes when David Wheeler tapped in at the back post before Ryan Harley did the same at the start of the second half. Harley added a second from the spot after Tom Parkes fouled Ollie Watkins before second half substitute Liam McAlindon completed the scoring handing Exeter only their second home win of the season.

Fresh from their 4-1 victory at Newport on New Years Eve, Paul Tisdale made four changes to his side with Reuben Reid back in attack in place of Liam McAlindon, Craig Woodman filled in at left back in place of Connor Riley Lowe. While Ryan Harley and Jordan Tillson started in midfield. 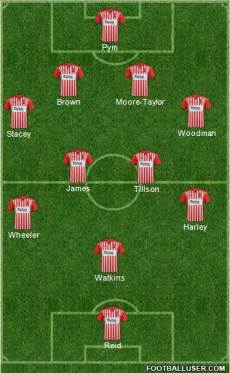 Orient who snatched a late point against Cambridge on New Years Eve were enforced into three changes. Teddy Mezague, Sandro Semedo and Sam Dalby all missed out after suffering injuries against Cambridge so Ollie Palmer started alongside Paul McCallum in attack, Yvan Erichot came in at center half while Callum Kennedy started on the right side of midfield. 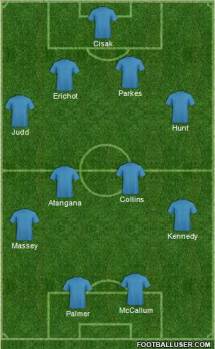 In a fairly quiet opening couple of minutes Gavin Massey created the first opportunity for the away side after good link up down the right with Myles Judd, the winger found Paul McCallum but his header was saved by Christy Pym. The O’s found it hard to contain Reuben Reid earlier in the season at Brisbane Road and were having the same troubles once more but the Grecians striker could only fire wide.

However the home side didn’t have to wait long to open their account after a deep ball into the box was cleared. Two headers into the box found David Wheeler who had nipped off the right flank in front of Nicky Hunt to flick past Cisak to put his side ahead. Exeter were full of confidence with Reid having a field day in attack with no O’s defender getting close to the former Plymouth man.

It was Reid who created the next opportunity after his neat control at the back post saw him set up Ollie Watkins but the midfielder could only fire his shot wide. The long ball was causing Orient all sorts of problems with Cisak saving well after Watkins outpaced Myles Judd and shot.

The majority of Orient’s play was predictably down the right hand side with Massey and Judd linking up well but from a Judd cross, McCallum’s header was saved by Pym. But Exeter went very close to doubling their lead almost instantly. A long ball forward saw Reid knock down to Watkins, the midfielder broke beyond the Orient defence but his shot cannoned off the post. The rebound hit Tom Parkes who had to clear off the line to prevent a second.

Massey had the away sides last half chance of the half when he broke behind the Exeter back line but pulled his shot wide of Pym’s post.  Reid’s physical presence saw Ryan Harley have a shot blocked after a neat knock down before David Wheeler’s front post header from a corner was blocked by Yvan Erichot.

Orient were lucky to only be one down at the break but that margin only lasted for five minutes of the second half when Wheeler crossed from the right finding Harley at the back post to slot in. Josh Koroma was introduced from the O’s bench in place of Callum Kennedy but Orient still looked adrift of ideas in the attacking third.

Nigel Atangana fired over from outside the box before the Grecians were handed the opportunity to wrap up all three points. Substitute Liam McAlindon played in Watkins who broke behind the O’s defence but his run was halted by Tom Parkes, leaving referee Michael Salsibury no option but to point to the spot. Harley coolly stepped up and slotted home for number three.

Midfielder Robbie Weir replaced Ollie Palmer as Andy Edwards opted for a 4-5-1 system for the last 20 minutes. Koroma was a bright spark for the O’s with the youngster keen to get on the ball and run at Exeter. His mazy run from the left wing saw him have an effort on goal but it flew high and wide over Pym’s goal.

After suffering a 4-0 defeat at St James Park last year, the remains of the 259 travelling Orient fans were wondering if it was to happen again. Exeter duly obliged when Atangana’s poor pass was intercepted in midfield, substitute Robbie Simpson played McAlindon in who slotted between Cisak legs to make it four.

The O’s players looked dejected with the injury crisis mounting up when midfielder Robbie Weir went down under no pressure. Weir’s reaction along with McCallum’s would suggest on initial viewing that the signs do not look good. Adeboyejo replaced Weir as the remaining minutes went without any danger leaving Orient reeling in 20th spot, four points above the relegation zone while Exeter stay in 11th on 33 points.

After four points from the previous two games, where will this result leave Orient? Confidence in the squad looked once again shot in the second half as the team crumbled once more to a side who before kick off had scored only five goals at home and won only won game. I appreciate that they were a side in good form and on a good run, but these are the games that you need your side to turn up for. The O’s players looked off the pace and not switched on from the first minute.

Reuben Reid had another field day in attack, with the Orient back line unable to deal with a long ball forward and Ollie Watkins’s runs from deep. The man who scored a hat trick on New Years Eve with runs from deep alongside his goal at Brisbane Road against Leyton Orient in the same manner. Orient were lucky to only be 1-0 down at the break but the question remains what confidence will be left after another poor display.

The two home results were positive, I am not talking about the performances in the predicament Orient find themselves in  points come over performance any day of the week. Orient need points quick to keep the gap between the bottom two and themselves but with a squad that is increasingly relying on younger players to get them out of the mess, some of the experienced players need to take notice and step up to the plate.

Yesterday was a game where Exeter wanted the game more than Orient, the travelling fans who made the journey will all tell you that the writing was on the wall from the minute Reuben Reid fired wide after two minutes. Exeter were quickly, hungrier and first to every second ball throughout.

I don’t mind losing a game, just like most Orient fans, we get used to it. But when there is no fight, commitment or passion on the field, it is hard to take. Well the stats tell there own story, not one yellow card for an O’s player yesterday, no one who put a tackle in frustration. The team went down without a fight.

Andy Edwards was always given an uphill task inheriting the worst squad Orient have had in a number of years along with injuries to senior players, January is a massive month for him. I mean with Weir’s injury we have two central midfielders currently at the club with one who’s contract ends this month. However from Edwards post match interview, the initial signs do not look good for recruitment.

A disappointing day, a poor result, another defeat and I am sure I will be saying that several more times this season let alone this year. All Orient fans know the predicament that we find ourselves in, it might help if the players understand it too. Let it sink in for a moment that Colchester United who were utterly terrible against us in November are sitting 8th, two points outside the playoffs. Where as we sit four points above the bottom two………

Another home game Saturday against Barnet where points are needed but as I sit here with Accrington away tickets booked for a Tuesday night in March, you sometimes wonder why?