Barrow away…. a bit late

So after a midweek loss in Tranmere, it was another away trip to Barrow that awaited Orient fans on Saturday afternoon. A game which rubber stamped the realisation that your team were now playing non-league football. A bleak ground, no roof, open to the elements with the expectation that you would be rained on.

Following the loss in midweek, Davis opted for a back three in Sendles-White, Ellis and Widdowson with Caprice and Brophy as the wing backs. I bit shocked that Happe had dropped to the bench with the youngster not doing a lot wrong in his recent performances. Lawless, Clay and McAnuff were in midfield with Mooney returning to partner Bonne in attack.

Despite the slow start, Orient as always looked shaky at the back but took the lead in route one fashion. Grainger’s long kick found Brophy on the left who crossed for Mooney to slide home. The question on everyone’s lips in the away end was how long was the lead going to last for?

O’s fans had the feeling of de ja vu as poor marking inside the Orient box, as expected, allowed Gomis to scuff his shot into the ground and loop over Grainger. A blow which was culminated in the 12 year old Barrow firm giving large towards the away end. With Orient failing to clear a set piece, no one seemed set inside the box. A header flicked forward caught Sendles-White on his heels and trying to play the offside trap to no avail, leaving Gomis free to strike fortunately home. 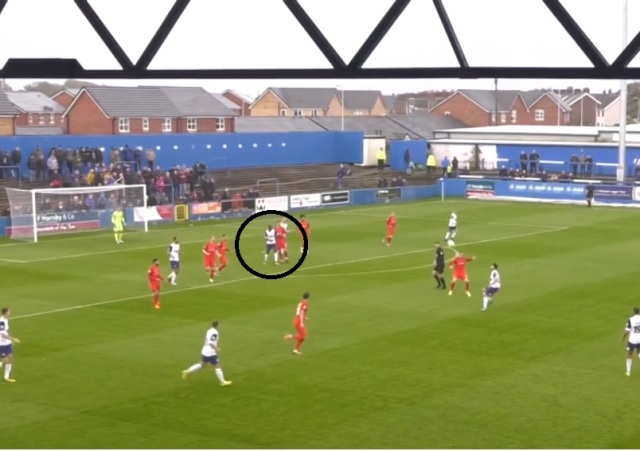 Sendles-White caught on his heels and appealing for offside

As the scores were level, the wind was playing havoc at the back for Orient as they were finding it hard to adapt to the conditions. After mistakes from set pieces throughout the season, Orient should have been behind and had to be thankful for the offside flag. Ellis lost Harrison in the box (wasn’t the only time), he headed home but was offside.

As the game opened up Orient took the lead in what will be deemed the scrappiest goal of the season. With a free kick not cleared by Barrow, ricochet after ricochet, the ball finally fell to Clay who at the second attempt fired home to restore Orient’s lead.

Despite leading, how long was this going to last? Orient did not look confident at all at the back, with Barrow causing problems from set pieces. O’s men not staying with their men. Following a throw in on the right, Orient press the ball but their defence line is out of position. When the ball is crossed McAnuff and Caprice are out of position meaning they lose the first header, Ellis is on heels and is ball watching leaving White to tap in.

Orient’s back three out of position, leaving a hole at the back post

Caprice and Mcanuff not set at the back, with Ellis marking White

Ellis ball watching at the back, allowing White to tap home

With the scores level at the break, Orient had now conceded two or more goals in their last seven games, and 14 of their last 17 away games. The second half kick off with Orient in the ascendancy but were unable to put their chances away. Mooney and Bonne were linking up very well in attack with both having efforts saved.

The game was there for the taking if a man in red would take the initiative but as time ticked on, mistakes were evident at the back. At times Orient need to do the basics right, put the ball in row z and get organised. Any mistake at the back was giving the home side confidence with them hitting the post and last seasons top scorer Byron Harrison missing a guilt edge chance.

Myles Judd replaced Jae Caprice in the right wing back role, not so sure Caprice suits starting that high up on the right. I know he wasn’t 100% fit but I think he performs better when he comes from deep and has time to run at his opposing full back. However learning to cross the ball earlier would definitely help Orient’s supply into the box.

With the clocking ticking, Orient fan were calling for Dayton or Boco that could help to pick up the important three points. It didn’t come till late when Dayton replaced McAnuff with little time to make an impact. But the chance to seal victory came when Brophy broke into the box but was blocked off. O’s fans appealed but referee Andrew Miller so no much to the disgust of the away contingent.

Orient and Davis had to settle for a point but no win, leaving the O’s picking up just two points from a possible 21. Not a good record at all but has the run of defeats stopped? It is true Orient have fell behind a lot in recent matches however the last three games Orient have taken the lead in they have only obtained one point. Lost to Hartlepool, Lost to Tranmere and Drew with Barrow. Not all about scoring the first goal, about getting ahead then doing the basics in order to protect the lead, something Orient fail to do.

In their winless run of seven games, Davis has only named the same back three/four twice, these changes cannot be healthy for the team. It hasn’t mattered which combination Davis has used they have still shipped goals, something which has to stop if Orient are to turn the corner and start picking up victories.

For all this pretty, passing football, how have Orient last six goals come about?

Fylde – Cross and header at the back post by McAnuff

For all Orient’s passing football, they have scored their majority of their goal recently in typical non-league fashion. Food for thought…..

With a week off from league action, the cup game with Dagenham could help Davis or make the situation worse for him. A win over the local rivals and a first round FA Cup tie or another defeat, their sixth in eight games and another without a win. We will see Saturday what the outcome will be……..

I am not sure Davis knows what his best side or formation is at this current moment, it is clear he is searching for the right formula to achieve the results. However, in recent weeks the midfield has been lacking, whether it being defensively helping the back four or attacking, providing support to Bonne and Mooney. The second half on Saturday they seemed to drop deeper and leave it for the forward to create.

Anyway, onwards and upwards to Dagenham Saturday, we all know what a lovely place it is….