“We Have Home Advantage, It is Sure to be Another Good Cup Tie”

Leyton Orient head coach Steve Davis is hoping his side can finish the job as they host Dagenham & Redbridge in their FA Cup 4th qualifying round replay tomorrow night. The sides battled out a 0-0 draw at Victoria Road on Saturday, with the winner of the tie set to face a trip to Gillingham in the first round.

In a game which lacked clear cut chances for both sides, Orient hit the bar twice through headers from Macauley Bonne and David Mooney. Davis spoke to leytonorient.com describing the game as “a good game, both teams had a go at trying to win it. It was quite end to end at times but lacked a bit of quality, it had a bit of everything. It was really competitive derby”.

Saturday’s 0-0 draw was Orient first in over a year but most importantly for Davis it was a clean sheet for his side, “we have done a lot of work on defending this week, it showed, we literally spend three days, six sessions on defending and shape with the back five and the rest of the team” It was Orient first clean sheet in nine games with Davis happy that “there were good signs today in terms of being tighter and not allowing them many chances”

It was the second game in a row that Davies opted for a back three with Joe Widdowson continuing on the left of the back three. The former Dagenham man admitted to leytonorient.com “it was good to come back, I know a lot of people here and I have got a lot of friends here, I like this club a lot. It was nice to come back, I had a good time here and it was a good game of football”.

In recent weeks, Widdowson has slotted in well to the back three and was very pleased to keep a clean sheet at his former club. Speaking to leytonorient.com “we will take confidence from it, we haven’t kept one for a while, it was pleasing for us today. As a back three it was our objective and we are happy with it, we defended well and hopefully we take it forward into future games”.

With the replay, Orient are set to play four games in 12 days but Widdowson was happy to take the game back to Brisbane Road, “it will be good taking the game back home, we have home advantage and I am sure it will be another good cup tie. We have to rest up and prepare now” With the winners playing Gillingham away  ,Widdowson knows that knowing the future opposition can be good, “when you get the incentive of who you will be up against in the next round, it will always spur you on, if it is a big or small team, you always look forward to it”.

Jobi McAnuff missed the trip to Dagenham and Davies revealed he could be back for Saturday’s game against Macclesfield, “he is injured, we have five senior players missing that would play in that team, that is half the team gone”.

Myles Judd made his first start of the season on Saturday and Widdowson acknowledges how well the O’s youngsters have been doing “the youngers players have been really good. Danny Happe has been outstanding since his has come into the team, a young center half who has grown every single game and done very well. Juddy had his first game and did excellent on his first start, there are good signs”.

Dagenham manager John Still admitted he was happy with most aspects of his side performance against Orient but would have liked to have won the game. Speaking to daggers.co.uk “I wouldn’t say I am disappointed, it is cup football and a local derby which makes it interesting. You get what you get, I would’ve like to win but we haven’t lost”. He added “I thought we played okay and I am happy with it but there were too many fouls in the game which broke it down to often”.

With Dagenham the highest scorers in the National League, it was a surprise that they failed to score for the second consecutive game on Saturday. However Still highlighted that it can happen in football, “I think we have been playing well and been free scoring and all of a sudden the goals are not going in, that’s football”. He added “where goals were flying in for us, they have stopped, There is a probably a reason for that, we are without a couple of important players in those areas”.

Dagenham captain Scott Doe admitted that after finding out the replay was on Tuesday he “would have wanted to get the job on Saturday”. Speaking to East London Advertiser “Orient are a good side and have recently been in the Football League we wanted to get the job done but we don’t fear going to their place”.

Doe acknowledge that it was frustrating not to score once again but knows his side must keep working on it to get the win on Tuesday. The 28 year old is in his second spell with the Daggers and knows how good a run in the FA Cup can be, “when you see the draw, if you get a big game or a winnable tie, it does spur you on even more to win because nothing is better than a cup run”. 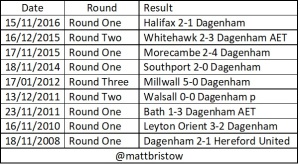 Still’s Dagenham matched Orient’s 3-5-2 system on Saturday with the 67 year old admitting “we took a gamble in playing a new system, a little bit through injury but I was happy with it. Overall you are always disappointed when you don’t win but not disappointed with the situation”.

Orient and Dagenham have had some memorable encounters in cup competitions with Still joking that he wants another “13-12″ after the sides played out a penalty shoot out in the JPT in 2011. After starting his career at the O’s still highlighted that he has an “affinity with the club, I am glad they are rising from the unbelievable miss management over the past couple of years. I am always pleased when they do well but not today”.

Orient will be without Jobi McAnuff, Charlie Lee, Josh Coulson, George Elokobi, Matt Harrold for tomorrow’s clash. On loan duo Mark Ellis and James Brophy are cup tied after being denied permission to play from their parent clubs. Myles Judd is set to continue after making his first start of the season on Saturday while Zain Westbrooke is hoping for a start on Tuesday.