“It’s a Cup Game, Anything Can Happen”

Leyton Orient head coach Steve Davis knows that tomorrow’s first round FA Cup tie with Gillingham is all about who performs better on the day. Speaking to leytonorient.com “it’s a cup game anything can happen, we believe we can go there and win”.

The O’s head to Gillingham on the back of a 2-2 draw at Wrexham last weekend. Orient twice fell behind at the Racecourse Ground but MacAuley Bonne levelled in the first half before defender Mark Ellis headed home an equaliser five minutes from time to ensure Orient level Wales with a point.

Davis saw his side fall behind within 42 seconds however was pleased with his sides reaction. Speaking to leytonorient.com “it was a very good performance particularly first half, even though we went behind the response was excellent, the way we played and created was how I wanted them to play. It was good considering the run we’ve had, their heads didn’t got down”.

Striker MacAuley Bonne netted the opener on Saturday and was pleased with the fight and spirit his side showed. The 22 year old has recently been called up to the Zimbabwe squad and highlights that the aim for Orient in the cup is “see how far we can get”. Speaking to leytonorient.com on tomorrow’s game and opponents “it will be a physical battle, on paper they are leagues above but at the end of the day it is two teams, 11 vs 11″

With Orient’s only win in their last 12 games coming in the FA Cup, assistant manager Ross Embleton is hoping his side can pick up where they left off against Dagenham. Speaking to guardianseries.co.uk “to a degree, it is a nice break from the league and we got a good result last round. It is something we will look to build on, we have looked back on the two games against Dagenham where we kept two clean sheets”.

After playing local neighbours Dagenham in the fourth qualifying round, Davis thinks tomorrow’s game at Gillingham is “a good draw, it is local, we feel we can get something from the game. We have got to believe that as a group we can do that. Hopefully we have one or two surprises up on the day and we do ourselves justice”. 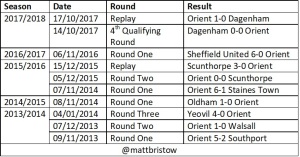 With Gillingham having a change in management, Davis highlights that they have picked up recently “Lovell has come in and done a great job. He is getting them organised and hard to beat, we can see that from the clips and games. He is working them hard, pressing and working as a unit” leytonorient.com. He added “they are tight in how they defend and are hard to break down, they seem to be responding to what he wants”.

After a good result on the road last weekend, Davis praised the away fans and illustrates that they have an important role to play. Speaking to leytonorient.com “the away fans are the support, they travel 200 miles to watch you play. They were terrific last week, they have been great wherever we have been away whether it has been 200 or 2000. They get behind us and show huge support for the team, the lads really appreciate it”.

Gillingham head in tomorrow’s game on the back of a 3-1 away victory at Rotherham last weekend. Two goals from Josh Parker and a Tom Eaves header gave the Gills an all important three points in their battle of survival.

Caretaker manager Steve Lovell was extremely pleased with his sides performance on Saturday and knows his side have set their standards now. Speaking to gilinghamfootballclub.co.uk “that’s the benchmark, you’ve got to roll your sleeves up , work hard and give everything. At times we played some lovely stuff and beat a good side. It was an excellent result and performance.

Lovell took over on a temporary basis after Ad Pennock left in October and has done his chance of the full time position no harm. Speaking to kentonline.co.uk “I haven’t made it any easier for people to make that decision but I have said all day long I want to do it. I know my ability and what I can do”.

Parker who scored twice at Rotherham praised Lovell’s impact on the squad and the faith he has in them. Speaking to kentonline.co.uk “when there are issues on the pitch we sort them out but when we have the ball, we basically do what we want”. He added “that’s the faith Loves has in us, some managers might not like that but he believes in us and trusts us a players because he has been around long enough to know what we are capable of”.

After losing just one of his four games in charge Lovell is pleased that his messages are being taken on board by the players, “I am working wit these players and they are responding to what I am doing. They have taken on board what we are working on with them and we’re trying to make them understand what we are asking of them”. kentonline.co.uk

Gillingham have not progressed the second round since 2012/2013 season and midfielder Jake Hessenthaler is hoping their luck improves tomorrow. Speaking to kentonline.co.uk “maybe we don’t want a break in the league but it is nice to leave on a high. Hopefully now we can get a bit of luck in the FA Cup, which we haven’t seen a lot since I have been in the first team”. He added “hopefully this may be a different year and I would like to get a few more highlights in the FA Cup”. 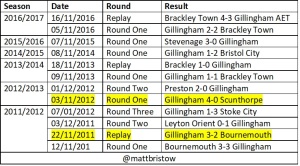 Despite the 45 league places separating the teams tomorrow, Lovell wants to keep the momentum going with his side but is aware of the danger that Orient can possess. Speaking to gillinghamfootballclub.co.uk “there’s a chance to progress, it’s a big game for everybody and players will be fighting to get through to the next round”. He added “we’ve got to match them, they have experience up front and are strong at the back, we need to be prepared which we will be”.

Leyton Orient will be without duo Mark Ellis and James Brophy as they ineligible to play in the FA Cup after their parent clubs denied permission. Joe Widdowson and Alex Lawless trained midweek and could be back in contention for the trip to Gillingham. Matt Harrold came through 60 minutes in midweek and is set for a place on the bench. Zain Westbrooke is set to continue in midfield after impressing on his first start at Wrexham last weekend. Charlie Lee, Josh Coulson and George Elokobi remain side lined through injury.

Gillingham will be without Bradley Garmston who tweaked his hamstring while defenders Alex Lacey and Ben Nugent are a couple of weeks away from fitness. Striker Noel Mbo is back available after returning from his loan spell with Cray Wanderers.

The last seven meetings between the sides

The five meetings between sides in the FA Cup