Leyton Orient’s interim head Coach Ross Embleton knows that Saturday’s point against Dover Athletic means nothing if they fail to beat Chester City at Brisbane Road tomorrow. Speaking to the East London Advertiser, Embleton stated “it’s only a good point if we can get three on Tuesday, we need make sure we keep building”.

Despite the draw with the league leaders, the O’s stretched their winless run to 12 games with Embleton hoping that they can finally grab a win on Tuesday. Craig Clay earned the O’s a deserved point, stroking home 12 minutes from time after Nortei Nortey had given Dover a first half lead. 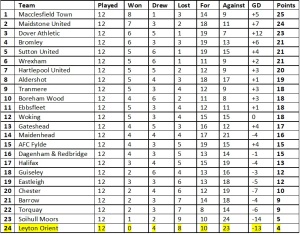 Embleton took charge for the first time after Steve Davis was dismissed last Tuesday after a poor run of form. He highlighted to leytonorient.com about the game plan he decided to go with “we were conscious of how many early goals we have let in, we wanted to be quite solid in the first half. However we switched off in the box and it was disappointing to let their goal in” .

It was the fifth consecutive league game Orient conceded the first goal but Embleton praised his sides reaction “the boys reacted from the goal and most importantly in the second half we really gave it a go, we showed that we had that enthusiasm, we had that bit between the teeth to get back into the game”

Goalkeeper Sam Sargeant replaced Charlie Grainger after he was injured in the warm up and was happy with his first involvement of the season. Speaking to leytonorient.com “it’s always frustrating, you train every day, I have been patient, I like to think I train hard. I was happy to come in and get a positive result”. He added “I just had to forget everything and focus on the game, I had my first thing to do after the first minute and I am glad I warmed up well enough”.

Sargeant who has played second fiddle to Grainger so far this season felt a point was the least his side deserved and praised his side battling till the end, “we have not been in the best of form and to come away with a point, it was the least we deserved and we could have nicked it at the end”. He added “we kept fighting till the end, we did it against Eastleigh earlier in the season, got a 93rd minute equaliser. We did the same today”.

After being at the club from a young age, Embleton highlighted to eastlondonadvertiser that it was a proud moment for not only himself but his family aswell. “I’m extremely proud, my mum and dad were at the ground along with the rest of my family. It means a hell of a lot because this club has been part of our lives”.

Orient have not achieved back to back positive league results since September with Embleton keen for his side to build on the draw on Saturday. Speaking to leytonorient.com “we need to build on today, we have had one or two this season when we earned a point and we haven’t built on it. We need to make sure it becomes a good point on Tuesday”.

Chester City arrive in E10 on the back of a 1-1 draw away at Bromley on Saturday. Marcus Bignot’s men took the lead through Ross Hannah on the quarter hour mark however they conceded just a minute later with Luke Wanadio levelling for Bromley.

Chester are already on their second manager of the season after Jon McCarthy was sacked in early September. Bignot was appointed but they still sit in the bottom four however the former Solihull Moors manager praised his sides performance at Bromley. Speaking to chesterchronicle.co.uk “you only have to look at where Bromley are in the league. It was always going to be a difficult game but you have got to give credit to our players who acquitted themselves really well again”.

Ross Hannah netted his first of the season for City on Saturday and Bignot highlighted the impact of several of his players. “I was delighted for Harry White but we are disappointed to lose him now because he was back to the man we all know. Ross Hannah we knew it was a matter of time before he scored”. He added “things were going well, we got the setback with Harry, it knocked our momentum a bit but to every single player today, they have been a credit to the club”.

Chester had to survive some Bromley pressure in the second half but Bignot was happy that the performance got the result it deserved, “we were comfortable coming in at half time, in terms of how we went about our business. Second half they applied the pressure but we stood up to it and that was real positive for us”. He added “we got the result we deserved today, if  we continue to work hard and we will get our just rewards”.

Chester’s squad has been decimated by injury with Bignot describing this week as “an absolute challenging week for us”. He continued “we travelled on the day today and we will travel on the day against Orient, then we have an early kick off on Saturday. It is really going to test our squad. We are down to the bare bones”.

With the injuries mounting up at the Deva Stadium, Bignot is keen to highlight “the squad today and the travelling supporters today can only be proud of what we put on today. You are only ever as strong as your bench and the environment we create can only be as good as the people in the stand”. He added “the group is coming together, that’s five performances on the bounce”.

Leyton Orient striker Matt Harrold will be pushing for a start after impressing off the bench against Dover Athletic. Sam Sargeant could continue in goal with the extent of Charlie Grainger’s injury unknown. Charlie Lee, Josh Coulson and George Elokobi are still out through injury.

Chester will be without Paul Turnbull through suspension after he picked up his fifth booking of the season on Saturday. Harry White is a doubt after picking up an injury against Bromley while Reece Hall-Johnson, Tom Shaw and Craig Mahon are out with injury. Ryan Astles and Jordan Archer missed Saturday’s draw and are still doubts but Ryan Rainey and Myles Anderson could be handed starts at Orient.

The last seven meetings between sides