“The Cobwebs Are Out Now”

Leyton Orient head coach Justin Edinburgh insists his side are back in the swing of things ahead of their trip to FC Halifax tomorrow evening. The O’s played their first game for two weeks against Aldershot on Saturday and with two games this week, Edinburgh stated to East London Advertiser “The cobwebs are out now so I look forward to consecutive games and getting some important results”.

The O’s are without a league win since Boxing Day and that run increased after a 3-2 defeat on Saturday. MacAuley Bonne put them ahead after 18 seconds but the Shots scored goals either side of the break to go 2-1 ahead. Defender George Elokobi drew the O’s level before the hour mark but Adam McDonnell struck 14 minutes from time to leave Orient just above the relegation zone.

After a dream start, Orient were once again made to rue missing their first half chances, an issue that Edinburgh knows he needs to address. Speaking to leytonorient.com “we are hugely disappointed, on chances created there should be one winner. We created chances to win games at crucial times. We probably should have been going in 2-0 or 3-0 at half time but we go in at 1-1, it was difficult to take”.

With Orient conceding three goals on Saturday, it doubled the amount they had conceded in the league since Edinburgh’s arrival in late November. The Orient head coach was disappointed with the manner of the goals conceded, “we were gutted with the second one, we haven’t reacted well enough to initial shot. I felt we were a little bit hesitant in our play today”.

Defender George Elokobi made his first league start since September and capped it with a goal on Saturday but was quick to put the defeat to the back of his mind. Speaking to leytonorient.com “The focus now turns to Tuesday game and to take our frustration out and try and get a result for ourselves and the fans”.

Sitting just above the relegation zone and with a busy month ahead, Edinburgh is expecting his side to perform better and the points return to increase. Speaking to East London Advertiser “we are now back in the groove so I certainly know and expect to see our performances start to increase and pick up as we along”.

FC Halifax head into tomorrow’s clash with Orient looking for their first league win since 23rd December.  Three goals in ten second half minutes from Louis Dennis and Josh Rees (2) saw Bromley send Halifax to their fourth defeat in their last seven. Billy Heath’s men sit precariously close to the relegation zone and will be hoping to gain an important win on Tuesday.

After keeping the league’s top scorers at bay in the first half, a crazy spell at the start of the second half saw their chances diminish. It was the second game in a row, Billy Heath’s men have conceded three goals in the second half and it is something he knows they need to address. Speaking to fchalifaxtown.com “we did okay in first half but in the second half we were poor. We have to act better as a side, we lose concentration when things go against us and cannot do that at this level”.

The Shaymen started the season well after their promotion from the National League North last season. However with just two league wins since 23rd September, Heath is looking for his players to stand up to the challenge. Speaking to fchalifaxtown.com “what we must do is step up to the plate. I have said to the lads that it’s roll up your sleeves up time now, by that I mean get a result on Tuesday”.

Striker Shaun Tuton returned to the Shay on loan after almost two years away after his move to Barnsley and was glad to back. The 26 year old was thrust straight into the starting 11 but his second debut ended in defeat. Speaking to fchalifaxtown.com “they were just a bit sharper than us and they wanted it a little bit more”. Tuton hasn’t scored since his move to Barnsley but knows Tuesday’s game with Orient can’t come quick enough “we had a poor performance, move on to Tuesday and we will have to make it right”.

Defender Michael Duckworth returned to make his first start since December and is nearing a return to full fitness. The former Fleetwood defender joined in the summer but injuries have hampered him this season but he is glad to be back. Speaking to fchalifaxtown.com “I’m fit and I feel fine obviously I need that match sharpness but it’ll will take me two or three games. But it’s been too long and it was nice to back out there”.

The 25 year old is fully aware of the predicament his side are in and how important the game with Orient could be on the outcome of their season “it’s massive to be fair, probably our biggest game of the season, they are in and around us so three points could be massive for us”. He added “hopefully it can kick start our season because the last two games have not been good enough”.

Leyton Orient will have to assess James Dayton who limped off on Saturday while Myles Judd is struggling with a groin injury. Joe Widdowson will serve the last match of his suspension while Jamie Sendles-White is also struggling with injury. Dan Holman is set to continue alongside Macauley Bonne in attack after making his first start for the club on Saturday.

Michael Collins returned from illness in Saturday’s loss at Bromley and is set to continue in midfield. Recent loan signing Shaun Tuton made his first start this season and is set to lead the line on Tuesday night. However Jake Hibbs is a doubt after being replaced through illness on Saturday.

Heath to fchalifaxtown.com “it is important that we keep the squad fit and important we don’t get any more suspensions or injuries. Hopefully today wasn’t too bad and we will have the full 18 to pick from” 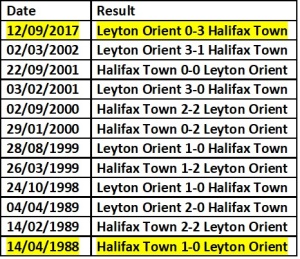 Last 12 meetings between the sides