“We Need to Make That Gap as Big as We Can”

Leyton Orient defender Joe Widdowson is fully aware of the task that awaits his side as they travel to in form AFC Fylde tomorrow. The O’s sit just six points above the relegation zone and the former Dagenham man knows his side need to keep the points ticking over. Speaking to East London Advertiser “we need to make that gap as big as we can and keep trying to get the wins on board so we can pull further away”.

The O’s head north on the back of a 1-1 draw with Tranmere last weekend as Dan Holman’s first goal for the club cancelled out Ritchie Sutton’s first half header. Justin Edinburgh praised his side as they fought back to gain a point. Speaking to leytonorient.com “it was a tough battle, I thought the players showed a lot of character and energy in really tough conditions. We gave a fantastic account of ourselves in a really good game. 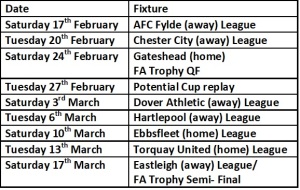 Orient added defender Sam Ling and Nathan Mavilla in the past ten days to further enhance competition at Brisbane Road. Tomorrow’s trip to Fylde is the start of a potential nine fixtures in the next month and Edinburgh highlights that the squad will have to play their part, “we have a busy period coming up now, a lot of travelling and big games. We are blessed with the squad that we feel can cope, everyone is going to play their part”.

After taking 15 points from his first ten league games in charge, Edinburgh is looking forward to gaining more till the end of the season. Edinburgh took over with the O’s 21st and the former Newport boss is delighted with how his side are continually getting better. Speaking to BBC London “I think we are improving all the time. At times decision making can be better but from where we’ve come from in a short space of time, I can’t praise the players enough”.

Midfielder Craig Clay has relished his recent partnership with Ebou Adams as it has given him license to go forward. Clay who joined from Motherwell in the summer is not fazed by the trip to Fylde despite them sitting in the play offs. Speaking to leytonorient.com “they have been doing well, we played them in our rough spell. They have been in good form and have good players but we worry about ourselves. We have turned it up a bit with our performances and results, three losses in 13. We go in confident”.

The O’s have only picked up 13 of their 36 points against sides in the top half. Since Edinburgh’s arrival they have only lost one of the four fixtures they have played against the top seven, “it will be a tough game, we are probably going to the in form team in the league but we have done well against the top teams and we want that to continue on Saturday”.

Fylde host Orient top of the form table after picking up their seventh win in their last ten league games in a 2-1 victory at Gateshead last weekend. Danny Rowe’s brace moved the front man on to 18 league goals helping Fylde back in to the play off spot. 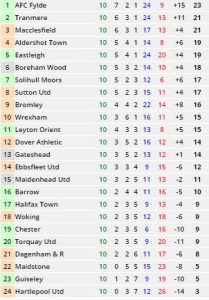 Rowe who’s 50 goals last season helped fire Fylde to promotion felt his side were always in control at Gateshead and was pleased to gain maximum points. Speaking to afcfylde.co.uk “ If you had offered us three points before hand we would have taken it. It is a tough place to come, we won and throughout the game I felt we were in total control”.

Despite the victory manager Dave Challinor highlighted that conceding in stoppage time partly shaded the three points. Speaking to afcfylde.co.uk “the one frustration was to concede, it tinges what has been a great day for us. Winning 2-0 is win win for everyone, the defenders come off happy as do the attackers”.

After winning the National League North last season, Fylde have been steadily improving as the season progresses with Challinor reassessing where his side could finish. Sitting inside the play offs, Challinor stated to afcfylde.co.uk “at the start of the campaign, our realistic aim for this stage was to be safe and secure. We have achieved that and now we have an opportunity to change the ambitions and look up. We have given ourselves a realistic chance of finishing in the play offs”.

With just seven points separating the top seven and six of the top eight playing each other this weekend, Challinor is keen not to set a points target for his side. “In terms of the play offs, it’s difficult to predict how many points you will need. I don’t want to guess at a number. We have to be proactive and get as many points as possible, If we can take care of business then the table could have a very different complexion.”

A victory on Saturday would give Fylde their first ever National League Double after beating Orient 2-1 back at Brisbane Road in September. The result still lives in the memory for Challinor, “to win their earlier in the season was a great result, up there with the best results we have had with the club. Orient have not had the start they would have liked but have had a decent run of late. Probably we didn’t expect our first double to be against Leyton Orient”.

Midfielder James Hardy is glad to be back after being side lined for three months with a back problem. The 21 year old has returned to play a part in the last two games and is aware that Orient will be a test for his side. Speaking to afcfylde.co.uk “I thought when we played at their place, they were one of the better sides we’ve come up against. I reckon if we play as well as we know we can then we should get three points but it won’t be easy by any means”.

Leyton Orient have doubts over Jobi McAnuff (neck) and Myles Judd (groin) ahead of the trip. New signings Sam Ling and Nathan Mavilla could be involved in the squad while James Brophy is looking to continue after impressing on his first start since his January move from Swindon.

AFC Fylde boss Dave Challinor has no new injury worries and will be hoping striker Danny Rowe can add to his 18 league goals. James Hardy is pushing for a start after impressing off the bench after returning from injury.

Head to Head – One previous meeting