“A Game We Can’t Take for Granted”

Leyton Orient assistant coach Ross Embleton knows his side cannot underestimate bottom side Guiseley when they visit Nethermoor Park on Good Friday. Orient have already lost three of seven games against the current bottom four and Embleton wants his side on top of their game. Speaking to leytonorient.com “it’s a game we can’t take for granted in any shape or form. We need to go to Guiseley and be ruthless. Give ourselves an opportunity to pick up three points again”.

The O’s head north after picking up their first win in seven last weekend with a 3-0 victory over Woking.  A brace from top scorer Macauley Bonne and a James Brophy strike secured the win for Orient. Head Coach Justin Edinburgh was delighted with the victory as it was their first at home in 2018. Speaking to leytonorient.com “it was a huge three points, a long time in coming. Obviously in front of a big home crowd today, what we needed to give them, the victory at home which has been a bit elusive of late”.

Man of the match James Brophy netted the third for Orient and his third of the season. The former Swindon winger is highlighting his potential with a run in the side at left midfield. The 23 year old joined permanently in January and is now finding form, being involved in four of Orient’s last six goals and he is not finished their. Speaking to East London Advertiser “when you play in a wide position further forward, people will look at your tally of goals and assists so I have got to try and add to my game”.

Another positive for the O’s was keeping back to back clean sheets for the first time since February. Orient named the same back five for the last two matches and defender Joe Widdowson feels his side have felt comfortable at the back. Speaking to leytonorient.com “we are pleased as defenders and a back four with Brillo to keep another clean sheet. We looked quite solid again. We created more chances and took them”.

Good Friday’s trip is the first of two games in four days with Orient facing Maidenhead on Easter Monday. Embleton believes that with Guiseley rock bottom and needing the points, it could be a good thing for his side. Speaking to leytonorient.com “with the position they find themselves in, they will have to try and win the game. We are away from home, we can exploit them in certain areas”.

Orient are ebbing closer to safety and with seven games to go, Brophy is keen for his side to finish the season in good form. Speaking to East London Advertiser “we want to lay the foundations for next season. We need to finish this year on a high with a good run of results that will lay foundations for pre season”.

Guiseley head into tomorrow’s clash with Orient 14 points from safety at the bottom of the National League. The Lions game against Torquay last weekend was postponed leaving Sean St Ledger men, a long way from safety.

Guiseley’s last game saw them draw 1-1 with Halifax, Kayode Odejayi put them ahead in the first half but Ben Tomlinson levelled the game in the second half for Halifax. Interim manager Sean St Ledger admitted to Guiseleyafc.co.uk “I have to be proud of everyone of my players, we wanted the three points but didn’t get it but we dug out the draw. Last week we went down to ten men and lost, in terms of growth, against the wind and adversity we got a point, the lads were fantastic, I can’t ask for any more”

Former Republic of Ireland defender St Ledger took over at Nethermoor Park in February after Paul Cox departed. The 33 year old will take charge of his sixth game on Friday and he alluded to guiseleyafc.co.uk that his side need to be better in front of goal, “we had many opportunities and we haven’t converted them, if we wasn’t creating them then I would be more worried. We are, we have good strikers and we were unlucky when we hit the post, I can’t ask for any more of the players”. 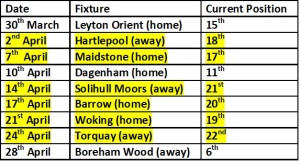 Despite sitting 14 points from safety, Guiseley still have hope that they can survive the drop as they face several of the teams directly above them in the run in. St Ledger highlighted to wharfedaleobserver “in terms of growth and getting better, we are clearly doing that. We have spoken about taking each game as it comes, until it becomes mathematically impossible, we will keep going”.

Guiseley picked up their first win since Boxing Day in St Ledger’s second game in charge (1-0 vs Fylde, 20/02/2018). Despite battling performances, they need wins in their predicament and St Ledger understands that. Speaking to Yorkshire Post “I cannot ask more in terms of effort, commitment and attitude. Sometimes, in football, you need that little bit of luck and I don’t think we have really had that in the last two games.” He added “I feel a bit for the lads as some of the performances have probably warranted better results”

With back to back positive results at home, St Ledger is looking to make it three in a row when Orient visit. Speaking to wharfedaleobserver “Leyton Orient are a team that are resurgent under Justin Edinburgh. Their form away from home is very good and it will be a really tough game. They’ve got some really good players in their side” He added “But the last two home games we beat Fylde and we drew with Halifax with 10 men so I’m hoping that we can try and make Nethermoor a bit of a fortress”

Alex Lawless, Charlie Lee and James Dayton all remain side lined with injury. Striker Matt Harrold is a doubt with a hamstring injury that he picked up against Woking. Justin Edinburgh could name an unchanged side for the trip.