“It Will be a Good Marker to See Where We Are”

Salford City manager Graham Alexander can’t wait for his side to open their National League campaign when Leyton Orient visit tomorrow. Salford were promoted as champions of National League North last season and the 46 year old thinks tomorrow’s game will show how far they have come. Speaking to salfordcityfc.co.uk “it will be a good marker to see where we are and where we need to improve”

Salford rounded up their pre-season campaign with a 2-1 victory at Altrincham last week with Alexander quick to highlight to Salfordcityfc.co.uk “the games are done and I have been really pleased with how the players have approached everything“. Despite the victory, Alexander stated “pre season is there for a purpose and prepare for the season and that’s what we have done. We have never took our eye of where we really need to kick in, which is next Saturday”.

Alexander was appointed in May after joint managers Anthony Johnson and Bernand Morley left by mutual consent. The former Fleetwood manager signed a four year deal at the Peninsula Stadium and is fully aware of the expectation that surrounds Salford City. Speaking to nationalleague.org.uk “it is similar to what it’s been for the past three to four seasons, that’s success. We’re not going to hide or shy away from the fact but we have to earn it and you only earn it through hard work so we’ve put the building blocks in place”

In a summer of spending, Salford have brought in many names from higher leagues to help them on their push for another promotion. Midfielder Danny Whitehead swapped Moss Rose for the Peninsula Stadium in the summer after helping Macclesfield to the title last season. The 24 year old is fully aware of the challenge upon his side this season. Speaking to nationalleagueorg.co.uk, “make no mistake, it’s going to be hard. Every game is going to be really challenging, there won’t be any easy games. Every team plays in a different way so it’s about how we adapt to them and work on it in training”. 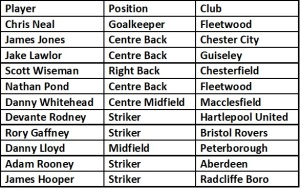 Alexander’s Salford are pre season favourites for the division but feels his side are amongst are whole host of clubs looking for promotion. Speaking to National League Full Time Podcast he stated “we are in with a group of 9,10 or 12 clubs in the National League that have got ambitions to be at the top end. There are lots of big clubs in the division with the purpose of getting into the Football League. This is our first ever season at this level and we want to hit the ground running”.

Orient finished in 13th last season but Alexander highlights the credentials that Justin Edinburgh’s men have. Speaking to salfordcityfc.co.uk “I have no doubt that Leyton Orient will be up there, to compete at the top end. They are an extremely big club at this level with the experience in their ranks and their manager”.

With the BT Sport cameras in attendance and Salford’s first ever game in the National League opening up the league; a bumper crowd at the Peninsula Stadium is expected. Alexander has called on the fans of Salford to get behind his team ahead of the clash with Orient, “The buzz, excitement and tension is there, I know the supporters will come out in there numbers”. He added “I’ve heard a lot of good things about the crowd of Salford and the atmosphere they can create, we’ll need them on Saturday without a shadow of doubt”.

Nathan Pond, Danny Whitehead and Danny Lloyd look set to make their debuts. Alexander will have to make a decision on the striking talent available to face Orient.

Alexander to salfordcityfc.co.uk “we have a few niggles as you always do at this stage. Your work the players hard, they work themselves hard. It is nothing major but a couple will be missing”.