“It Gives Us A Foundation”

Leyton Orient defender Josh Coulson hopes his side can build on their first point of the season as they host Ebbsfleet tomorrow.  The O’s battled back to earn a draw at Salford on Saturday, Rory Gaffney slotted home  in the second half but Orient forced an equaliser with four minutes to go. Coulson stated to NLFullTime podcast “it gives us a foundation, we will do all the things we need to do to prepare and hopefully get some more points on the board”.

Head coach Justin Edinburgh was delighted with the response his side showed after going a goal down and praised his sides battling qualities to earn a point at promotion favourites Salford. Speaking to leytonorient.com “we had to dig deep, we had lots of opportunities but I thought we showed great strength, resilience and character to come away with a well earned point”.

Orient wasted chances in the second half to draw level before Craig Clay’s shot deflected in off Liam Hogan for the equaliser. Edinburgh revealed he thought it might not be there day after chances came and went, “we probably thought at times it was drifting away from us but that is testament of the players, they never gave in and got themselves back in the game and a point where if we hadn’t got one we would have been bitterly disappointed. The performances was very good today”.

Midfielder Clay helped force the equaliser as Orient ended the game strongly. He revealed to leytonorient.com that his side are benefitting from their pre season work “We know as a team with the work we have done pre season that in the last 15 to 20 minutes, I would like to think that we would fitter than 95% of teams. We know we can go until the last”.

Before Saturday’s clash with Salford, Edinburgh described the tough decisions he had to make on his starting 11. All three substitutes helped Orient grabbed a deserved point in Salford with the former Newport man describing the decisions “as possibly the toughest of his managerial career”. Speaking to leytonorient.com post match “the last couple of days has been tough, every player throughout pre season has been first class but what we asked was when the game changers we called up to have impact and they all certainly did”.

With two home games this week, Edinburgh is looking for his side to pick up their first win of the season. With seven games in August, Edinburgh is aware that Ebbsfleet along with every other side in the league will prove a challenge, “our early games are tough but as we all know, being involved in this league like I have and everyone witnessed last year, every game is tough. It is relentless but the players will be prepared”. 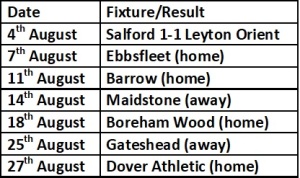 Coulson achieved promotion from the fifth tier back in 2014 with Cambridge and insists that his side will only look towards their next game. Speaking to NLFullTime Podcast “we will take every game as it comes, I know it’s cliché, but we won’t get ahead of ourselves. There are a lot of games in this month and it could shape who is where and what we can do”.

Midfielders Charlie Lee, James Dayton and James Brophy are all pushing for a starting place after impressing from the bench on Saturday. Josh Coulson will look to build on his man of the match display on Saturday tomorrow.

Edinburgh on the squad to leytonorientfc.com “one or two have knocks but nothing that will stop anyone being available for Tuesday”.