Corey Whiteley’s injury time equaliser helped Ebbsfleet United to their first point of the season last night. The former Dagenham midfielder struck home from the edge of the area to force a draw at fellow promotion contenders, Leyton Orient. James Brophy had given the home side the lead in the first half and the O’s looked set to seal their first win of the season before Whiteley struck in added time

Orient head coach Justin Edinburgh made just one change from the side that started in Salford on Saturday. After impressing from the bench, James Brophy started, dropping Josh Koroma to the bench. 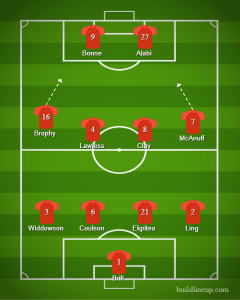 Orient’s 11 after Elokobi’s injury after 1 minute

Ebbsfleet manager Daryl McMahon made three changes to his side that lost 1-0 to Chesterfield on Saturday. Jack Powell, Darren McQueen and Sean Shields starting in East London, Michael Cheek and midfielder Jack Payne dropped down to the bench while Lawrie Wilson didn’t make the squad. 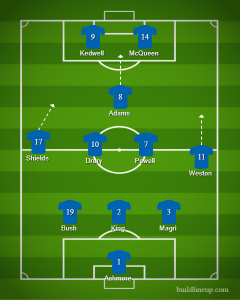 Ebbsfleet started the game on the front foot with striker McQueen put through within the first minute. He blazed his shot over which in turn left O’s defender George Elokobi in a heap, appearing to pull his hamstring after turning to deal with the striker’s run. Marvin Ekpitea replaced Elokobi in defence.

Fleet were enjoying large spells of possession and in their 3-5-2 formation were looking to get the ball down and play. Former O’s midfielder Ebou Adams, was causing Orient problems breaking from his no 10 role to try and make things happen.

After being on the back foot for the opening 15 minutes, it was Justin Edinburgh’s men who netted with their first attack. MacAuley Bonne collected the ball on the right hand side, he burst towards the Fleet penalty area. Bonne’s pull back found Brophy on the edge of the box and the former Swindon midfielder slotted beyond Nathan Ashmore for the opening goal.

The goal was completely against the run of play, but Ebbsfleet continued like the goal didn’t happen. Their free flowing football was easy on the eye and the O’s were struggling to cope with the movement going forward, especially down their right. Fleet could have been level on 22 minutes, Adams found Myles Weston on the right. He chopped back onto his right foot but his goal bound effort was brilliantly tipped to safety by Brill.

Utilising their wing backs Fleet were having lots of joy switching play early and getting Weston and Sean Shields to run at their full backs. Shields was causing O’s defender Sam Ling a headache down the right and nearly helped create the equaliser. Captain on the night, Danny Kedwell cut in from the left but could only bend his shot wide of the far post.

MacAuley Bonne’s header had to be tipped over by Ashmore while Shields was causing more havoc down the left but a combination of Brill and Marvin Ekpiteta prevented the winger from drawing his side level.

Neither side was able to gain much control of proceedings at the start of the second half with a few half chances. Ebbsfleet boss McMahon brought on Luke Coulson for Myles Weston to try add some more attacking threat going forward. But it was Orient who had a few half chances to go further ahead through Jobi McAnuff and James Alabi but neither could force a second.

The introduction of Coulson, moved Shields from the left flank to the right but it was almost Coulson who drew his side level. The ball dropped to the 24 year old on the edge of the box, his swivel and shot was brilliantly saved by Brill.

As the game continued, Orient were playing more like the away side, sitting deeper and trying to hit Ebbsfleet on the break. For their sustained periods of possession, McMahon’s men were struggling to create clear cut chances and it was Orient who were becoming the side more likely to net.

The O’s introduced Josh Koroma in place of James Brophy and Charlie Lee in place of Alex Lawless. Koroma first involvement was nearly a goal, McAnuff danced his way inside the Ebbsfleet area. His shot was blocked but the ball fell to the onrushing Koroma at the back post who saw his effort fantastically smothered by Ashmore.

The O’s were looking threatening from set pieces and a second goal would have killed Ebbsfleet off. Several set pieces went begging with Orient awaiting a final touch to add a second. But the Fleet should have levelled three minutes from time with two substitutes combining, Corey Whiteley pulled back to Michael Cheek but the latter could only scoop the ball over.

James Alabi was next to go close, latching onto a long ball forward but Ashmore saved well down to his right. Would these wasted chances come back to bite Orient in the backside? Indeed they would, after forcing a late equaliser on Saturday, it was Orient’s turn to concede late. It was Whitely who struck the decisive blow, his neat turn on the edge of the box created enough space to strike low and hard beyond Brill and into the far corner.

Despite being pegged back, the O’s could have snatched it in the final few seconds. After Orient kept a set piece alive, the ball broke to Bonne at the back post but last season’s top scorer couldn’t create enough power on the header.

Honours even in E10, a night in which Ebblsfleet highlighted their credentials for challenging at the top end of the League come April. Their free flowing football was easy on the eye and their continuation of playing the ball out from the back was admirable while still trailing. Shields was a major threat down their left in the first half but final delivery was missing.

Their 3-5-2 formation was perfect at building attacks from the back and creating overloads in certain areas. McMahon has definitely got his side playing a nice brand of football, the question remains is that they type of football which gets you out the division?

Ebou Adams eh….. not much more will be said about Orient’s former loanee but I’m sure it’s pretty safe to say there were many Orient fans wishing he was in the red of Orient last night. Adams more know for his position deeper in midfield was playing in the no 10 role and his runs from midfield were intelligent and creative.

The O’s did struggle adapting to Fleet’s system but having the chances they did in the second half, they will know it was a game they should have saw out. On reflection over the 90 minutes, a draw was a fair result but when you are 1-0 up at home, with four minutes remaining, these are the games you have to grind out if you want to challenge at the top.

Lastly, a word on Marvin Ekpiteta, awesome after coming on from the bench after Elokobi’s injury. A man who I thought was unlucky not to start the season, but now it is up the youngster to keep his shirt. But more performances like last night’s and that shirt will be on his back until April.