“We’ve Got the Players to be Able to Cope”

Leyton Orient assistant coach Ross Embleton highlights the need for all of his squad to be ready to step into the side. The O’s face their third fixture in a week when Barrow travel to Leyton tomorrow and the former Swindon man feels his side have the players to cope with the workload. Speaking to leytonorient.com “everyone has got to be continuously ready to step into the side. We’ve got the players to cope”. 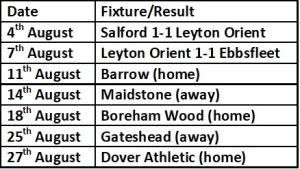 In a hectic August, National League sides play seven times before playing the same amount in September. The O’s lost defender George Elokobi on Tuesday night through injury and Embleton explained, “the first two months of the season are brutal, It is a big ask 14 games in two months”. Marvin Ekpiteta stepped in for Elokobi on Tuesday and Embleton highlighted “it was really tough for him and a huge ask but he performed fantastically. It showed he was mentally prepared”.

Orient drew their second consecutive fixture on Tuesday, 1-1.  James Brophy had given Orient the lead  before Corey Whitely netted in added time. Despite conceding late on, Embleton highlighted to leytonorient.com that his side need to move on quickly from the disappointment. “For it to end in the manner it did, it leads to frustration. We need to try and take a positive from that before we talk about the rest of the game. We have to turn it on its head, it was not so long ago we were sitting in the changing room jubilant after scoring so late at Salford”

Orient will be hoping to grab maximum points at the third time of asking and Embleton insists it will be a different game to Tuesday night. Speaking to leytonorient.com “we always set up trying to win games and that is exactly what we will do at the weekend. I am sure the opposition who have had a comfortable start to the season will bring a different challenge to what we had in our previous two games. I am sure Barrow will come with a game plan to try and make it difficult for us”

Midfielder Alex Lawless has started both games alongside Craig Clay in midfield and admitted that his side need to start putting their chances away. Orient were nearly made to rue their missed chances at Salford but Ebbsfleet made them pay on Tuesday. Speaking to leytonorient.com “the work rate was there, if we could have controlled it a little better and put our chances away. Our defending around the box until they scored was top notch but it was a killer blow”.

With two draws to the start the season, midfielder Lawless is more determined to get his sides first win of the season against Barrow on Saturday. Speaking to East London Advertiser “there are no excuses and none of these games are easy with us dropping what we feel is two points on Tuesday”. He added “it has definitely made us want to get all three on Saturday even more than we would have before”.

Defender George Elokobi is sidelined with a hamstring injury picked up on Tuesday, Marvin Ekpiteta will start in his absence.. Striker Matt Harrold and midfielder Dale Gorman are nearing a first team return but are not ready yet. James Brophy is a slight doubt after coming off with a knee injury on Tuesday night.