“If We Create to Our Maximum, We’re a Match for Any Team in the League”

Gateshead manager Steve Watson highlights his side have more than enough quality to trouble Leyton Orient tomorrow. The Heed already upset League favourites Salford, in their opening home game of the season and will be hoping to send Orient back south disappointed. Speaking to gateshead-fc.com “if we create to our maximum capabilities, similar to the Salford game, we’re a match for any team in the league, the lads have to believe in themselves”.

Gateshead lost their unbeaten start to the season last weekend after a 1-0 loss at Bromley. Junior Ogedi-Uzokwe’s header two minutes from time left a sour taste in the mouth of Watson, who was disappointed with his sides performance. Speaking to gateshead-fc.com “the quality today was well below the standard we require and the lads have set themselves”.

It was the fourth game in succession Gateshead had conceded the first goal but the first they lost. It also saw another goal from a set piece, their fourth of the season, a issue that Watson is thoroughly aware of. Speaking to gateshead-fc.com “the goal was as disappointing as virtually every goal this season, not being able to defend balls into the box. Second balls people are just knocking off and not taking responsibility”

The Heed return home on Saturday, where they have won both of their games this season. Midfielder Jack Hunter joined from Newcastle in the summer and feels it is important his side respond against Orient tomorrow. Speaking to gateshead-fc.com “its important we bounce back well and show everyone what we can do because we didn’t play anywhere near our best”.

Sitting on ten points from five games, on loan goalkeeper, Aynsley Pears wants his side to continue on their solid start. Pears was one of four arrivals from Middesborough in the summer either on loan or permanent and stated to gateshead-fc.com “we are trying to get back on track, hopefully we bounce back Saturday. It has been a good start, but it means nothing if we don’t continue the way we started”.

After five game in two weeks, Watson was happy with a free midweek which gave a chance for some recovery time for his players. However, the tough National League schedule continues with two games in three days over the bank holiday with the former Newcastle man highlighting the need to use his squad. “The lads have all trained well, we have only one doubt and they all have to stick with me. I guarantee the team that starts against Orient won’t be the same team that starts against Halifax. We have good players and fresh legs so everyone will be involved”.

Watson knows Orient well after he picked up his first win as Gateshead boss back in October. He is fully aware of the improvement they have made under Justin Edinburgh, speaking to gateshead-fc.com “Orient are a strong side, they are a very tough team to break down and very tough to beat”. However, Watson feels his side can cause them problems tomorrow “I like to think we have got enough about us to keep the ball at our feet and create against them. All the messages that we have given to them, they have looked to take them on board”.

Head to Head Meetings between sides

Defender Mike Williamson is the only doubt for the clash with Orient as he struggling with a groin injury. Scott Barrow is a out through injury but is continuing his rehab. On loan striker Luke Armstrong will be hoping to add four goals so far this season.

Last Time out – vs Bromley 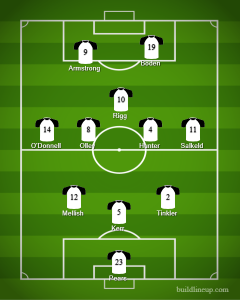