“We’ll Be Ready for Leyton Orient”

Eastleigh Caretaker manager Ben Strevens remains uncertain over the vacant managerial role but is fully focused ahead of the visit of Leyton Orient. Strevens took over the reigns after Andy Hessenthaler moved to Dover Athletic three weeks ago . Speaking to the dailyecho.co.uk ahead of the Orient game, “I’ve honestly got no idea if I’m in charge on Tuesday. We’ll be read for Leyton Orient.  We’ll just have to wait and see how the next 24-48 hours goes, but in my mindset I’m getting ready for Leyton Orient.

The Spitfires picked up their fifth win in their last six league games on Saturday after a 1-0 victory at FC Halifax. Josh Hare’s second half header was enough to see Eastleigh move to within four points of the playoffs. Strevens was thrilled with the win stating to dailyecho.co.uk “it was a big win and a big performance, from the first minute you could tell our boys were on it today. We were the better team and defended really well as a group”.

After a slow start to the league campaign, Eastleigh after slow start have started to climb the table and have lost just one of their last eight league games. The victory on Saturday was their first after Hessenthaler‘s departure and Strevens was quick to praise his staff and players over their recent form. Speaking to dailyecho.co.uk “taking the F.A Cup out of the equation, that’s now seven games unbeaten out of eight and five wins from the last six. That’s not me, that’s the players. The boys haven’t changed and I haven’t changed in two weeks”.

Eastleigh’s recent resurgence has coincided with a strong defensive base, seeing them only concede four goals in last eight. Saturday’s 1-0 win was their fourth in their last seven games and Strevens was pleased with sides defensive display. Speaking to eastleighfc.co.uk “it’s tough, you can’t have it all your own way, the defended really well as a group, Ben on the right and Yates on the left, did a good defensive job, getting back in and picking balls up”.

After creating a strong defensive base, Strevens’s next step is to get the Spitfires scoring some more goals. On Saturday, they found FC Halifax keeper Sam Johnson in fine form but Strevens is pleased with his sides progress “I see the boys each and every day in training and I know the work they are putting in. The got what they deserved today” Daily Echo. He added “I will take the 1-0, it shows how well they defended as a group, the four at the back were defensively good but there was hard work going on in front. We take the 1-0 but we would like a few more goals”.

Reda Johnson could return after a family bereavement kept him out of the victory at Halifax. Chris Zebroski has resumed training but is not fully fit while keeper Max Stryyjek will continue in goal after his loan from Sunderland was extended. Mark Yeates will be hoping to continue his fine form after the winger has been involved in Eastleigh’s last seven goals (1 goal, 6 assists). 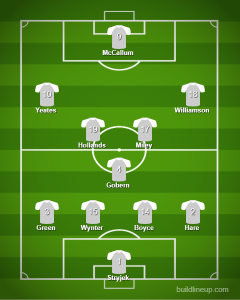