“It Will Be A Very Special Occasion”

Leyton Orient assistant coach Ross Embleton can’t wait to face Bromley tomorrow at a sold out Breyer Group Stadium. The O’s were without a game last weekend after their defeat in FA Cup Qualifying and Embleton is excited to get back to league action. Speaking to leytonorient.com “I’m really excited to get back out and play again and what with what goes with it aswell”.

Orient will be wearing a limited edition fourth kit, highlighting the role Orient had in World War One in the centenary year. Along with the special kit, tomorrow’s clash is Orient’s second “football for a five” initiative and once again it is sold out. Head Coach Justin Edinburgh spoke to East London Advertiser on tomorrow’s game “it will be a very special occasion with a big crowd present, the atmosphere, the fourth kit and the club’s history”.

The O’s head into the clash with Bromley on the back of a 3-1 victory at AFC Fylde. A brace from Josh Koroma and MacAuley Bonne’s 13th of the season earned Edinburgh’s men all three points. Edinburgh described the victory as a huge win to leytonorient.com adding “it was a very good performance and a massive three points for us against a team that will be there or there abouts at the end of the season”.

Orient defended superbly at AFC Fylde and struck three goals at very important times in the game. With three of Orient’s next four games at home it will be key for the O’s to take their away form in to games at the Breyer Group Stadium. Despite the backdrop of the game, Edinburgh is urging his side to be fully focused on the test in front of them. Speaking to East London Advertiser “it will be a huge occasion but it is one we have to put aside and concentrate on the game because it is another game and it will be a difficult one”.

After a hectic opening period of 20 games in 13 weeks, the enforced break has given Orient the chance for some rest, recovery and preparing for the run up to the Christmas fixtures. Embleton highlighting how weird it was without the need to prepare for a game but stated to leytonorient.com “we needed to try and find positive from it. We had a conversation at the beginning of last week, to make sure that the two weeks without a game is something to benefit from”.  He added “it’s been unusual but we feel we have got  lot of good work done in terms of what we need to do with the ball”.

Last weekend gave the opportunity for Justin Edinburgh to watch Bromley in action against Peterborugh, a chance he rarely gets to do. The Ravens did the league double over Orient last season but Embleton feels his side have what it takes to get some revenge. Speaking to leytonorient.com “It is a game we’re excited about, we feel we know what their threats are and what they are able to throw at us. We are back at home, after a two week and excited to go back out and get three points”.

The O’s sit second and are right in amongst the battle for promotion which Edinburgh highlighted was his aim but insist his side needs to continue to perform. Speaking to East London Advertiser “we are also coming up to the halfway point now and our first aim was to make sure we were in the mix and clearly we are there”. Speaking on Bromley “we are up against a team in decent form, but if we are at home, we go into every game looking to win, although we have no divine right to win”. 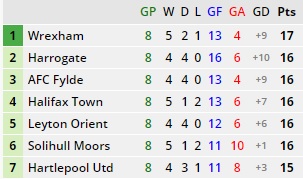 Charlie Lee is expected to miss out after the knee injury picked up at Fylde, Dale Gorman should keep his place in midfield. Myles Judd is back from suspension and is available while Sam Ling could be back in contention after his ankle injury. Defender George Elokobi is hoping for a recall to the squad after completing 90 minutes in midweek.

The Three Meetings Between Sides 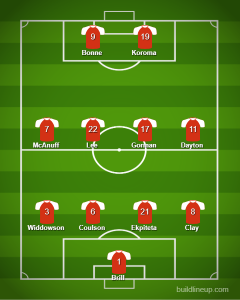