“These Are The Games You Want To Be Involved In”

Wrexham midfielder Paul Rutherford insist his side will be raring to go when table toppers Leyton Orient visit the Racecourse tomorrow. Just one point separates the top three sides in the National League and Rutherford knows that the results in these games could prove pivotal. Speaking to the Wrexhamafc.co.uk “these are the games you want to be involved in, the top of the table clashes that define seasons. We’ve earned the right for this to be a big game. It is one everyone will put down as a six pointer”.

The Dragons extended their unbeaten run to 11 games with a 1-1 draw at Maidstone last weekend as Bradley Walker’s third of the season cancelled out Simon Walton’s opener. Despite dominating the game, Wrexham found themselves behind but manager Sam Ricketts was pleased with his side’s performance. Speaking to the dailypost “the performance was really high, going a goal down is obviously disappointing but that is the first time we have come back from conceding to get something out of the game which is really pleasing”.

After missing out on the play offs last season, Sam Ricketts’s arrival in the summer has seen Wrexham towards the top of the table throughout the season so far. Rutherford who’s been at the Racecourse since 2016 has seen the improvement of his side in the past year and knows everyone is on the same page. Speaking to Wrexhamafc.co.uk “I think you can see now we are starting to assert ourselves on teams a bit more. This year, we’ve kept that solid defence but we’ve added slightly more going forward and we are in slightly more control of games. Everything’s pulling in the right direction”.

Striker Chris Holroyd bagged a brace at the Racecourse against Orient last season and will be looking to get back in amongst the goals on Saturday. Holroyd netted inside the first minute last season and the 32 year old wants his side to come out of the blocks quick tomorrow. Speaking to Wrexhamafc.co.uk “every game we always look to start and take the game to them. It’s been the theme and mentality this year. People have probably seen when we have started quick we have buried teams”.

Tomorrow’s clash with Orient is Wrexham’s first in a month of big games against their promotion rivals but highlights that it won’t define their season. Speaking to dailypost ahead of the game, Ricketts stated ” it is only three points, Leyton Orient are a good side, well organised with good players and they are up there deservedly like ourselves”. He added “it is a pivotal game along the journey but not a cup final. It is our chance to pit our wits against another very good side and see where it goes. It is another three points albeit against one of your rivals so it feels more important but is game 21 of a 46 game season”. 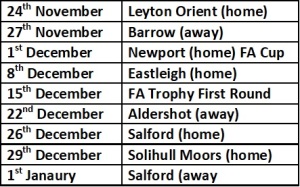 After back to back away trips, Rutherford is hoping the bumper crowd can push his side over the line on Saturday. The Dragons are unbeaten at home so far this season and the 31 year old knows how difficult it can be for opposition teams. Speaking to Wrexhamafc.co.uk “when the fans are behind you and this place is bouncing there are not too many more formidable places to come certainly in this league. If we can get all the formulas right and it’s a good start on Saturday. I think it will be a difficult afternoon for Leyton Orient”.

Wrexham have been in the fifth tier since their relegation from the Football League in 2008 and striker Holroyd is aware that it only matters where you are at the end of the season. Wrexham sat 2nd after 20 games last season but finished ninth and Holroyd highlights the important of his side focusing on themselves. Speaking to Wrexhamafc.co.uk “nothing is won at this time of the year, as along you get results and concentrate on ourselves and not look too much at what other teams are doing”

Defender Doug Tharme is out through injury but Manny Smith is back in training however the game will come too soon for the defender. Nicky Deverdics and Chris Holyroyd missed out on the squad at Maidstone but will be hoping for a recall against Orient on Saturday.

The Last Eight Meetings Between Sides

Last Time Out – 1-1 Draw at Maidstone