Leyton Orient head coach Justin Edinburgh has urged his side to bounce back from a disappointing draw on Tuesday when they host Gateshead tomorrow. The O’s struggled to replicate their performance at Wrexham on Saturday and Edinburgh highlights that the performance level must be increased if they are to return to winning ways. Speaking to leytonorient.com “the key is to stick together and don’t get frustrated, I am sure Saturday will be another tough game and we have to raise the level of performance to get a result”.

The O’s were unable to make it four wins on the bounce against Aldershot on Tuesday night drawing 0-0, cutting their lead at the top of the table to just one point. After their victory against Wrexham on Saturday, Edinburgh took some responsibility for his side performance. Speaking to leytonorient.com “the level of performance wasn’t what we wanted, I look at myself there and perhaps it might have been a game too far for one or two. It might have needed freshening up tonight”.

On Thursday, Edinburgh celebrated one year in charge at the Orient which saw him amass 86 points in 46 league games. Despite only drawing on Tuesday, defender Joe Widdowson highlighted the difference Edinburgh has had on the squad. Speaking to East London Advertiser “it is his man management, he creates relationships with players and trust players, encourages and motivates everyone. He gets the best out of every individual whether you are playing every week, in and out of the team or not involved at all, everyone feels part of it, valued and respected by the gaffer”. 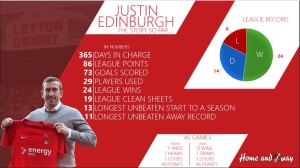 Widdowson has been an integral member of the squad, starting 20 of the 22 league games and believes that despite the disappointment on the draw, it extended their unbeaten run in the league to eight games. Speaking to East London Advertsier “we played some good stuff at times against Aldershot, I don’t think we were at our best but we played well in patches. We will remain positive and look forward to the weekend because it is a point in the right direction”.

The O’s have found Gateshead one of their bogey sides with Orient having to score late on to grab a draw earlier in the season. With the Heed in the playoffs place, Edinburgh highlighted the level of competition in the division this season. Speaking to East London Advertiser “Gateshead have maintained their good start like a lot of teams and I’ve said before about how it will go right until end. There are not many sides pulling away and we know Gateshead are a good side”.

Heading into the festive fixtures, the O’s will be hoping to use home advantage against Gateshead tomorrow but the Heed have been good travellers this season. Widdowson acknowledges the test that await his side but hopes that the Breyer Group Stadium can help them to get three points, “they have good energy and they are a competitive side so we will expect a hard game but we are at home. I feel like our home form has been good so we are looking for to it”.

Craig Clay is a doubt after picking up a dead leg on Tuesday night. Midfielder Charlie Lee and Sam Ling are back in training and could be involved on Saturday. James Brophy is hoping for a start on Saturday after recent impressive performances from the bench. Artur Janata is set to continue on the bench with Sam Sargeant and Charlie Grainger out injured.

The Five Meetings Between Sides