“We Are Fully Aware and Respectful”

Leyton Orient head coach Justin Edinburgh insist his side will not take Beaconsfield Town lightly on Saturday. Orient host the Rams in the FA Trophy first round and despite their opponents being two divisions lower, Edinburgh is not undervaluing them. Speaking to leytonorient.com “you never know, anything can happen on the day, we are fully aware and respectful, we have prepared like every other game. If for any reason anyone underestimates them, the evitable may happen”

The O’s head into Saturday’s trophy clash after suffering their first defeat in eight games at Boreham Wood last weekend. Femi Ilsanmi third minute strike was enough to inflict Orient’s third defeat of the season. Edinburgh was disappointed by his sides start and is looking for a reaction against Beaconsfield. Speaking to leytonorient.com “it wasn’t a good start, we know that and not to our standards. We bounce back from that. It wasn’t to be today, we have to accept that, it’s disappointing because we don’t like losing”.

Orient have only suffered back to back defeats once under Justin Edinburgh and midfielder Craig Clay admitted the opening period killed his side. The 26 year old has been a constant this season and highlighted the message Edinburgh gave after the match. Speaking to leytonorient.com “the gaffer got us in there at the end and we were obviously down but he lifted us and said look it’s only the second defeat. The gaffer got his arm around us and told us what we need to do and I’m sure we will go back in training and be straight back on it”.

The O’s lost out to Gateshead in the quarter finals last season and after already exited the FA Cup, Edinburgh’s men are keen for a run in the competition. Despite sitting top of the National League, Edinburgh does not see a run in the trophy as a distraction. Defender Joe Widdowson is excited by the prospect of the final at Wembley and acknowledge his side will be taking the competition seriously. Speaking to East London Advertiser “we want to win and get through to the next round and we have to beat whoever is in front of us. It is a competition we will take seriously and we look forward to being competitive in it this season”.

Midfielder Alex Lawless has had to bide his time this season with playing time limited with the competition in the squad. Lawless came on at Boreham Wood last week and highlights with a hectic festive period Edinburgh may call upon the whole squad in the coming weeks. Speaking to leytonorient.com “quite a few of the lads have been looking at the game as an opportunity to get some minutes. There are a lot of games where a lot can happen but hopefully it’s goes well for everyone and we have a near full strength squad over festive period”.

Myles Judd, James Dayton and Charlie Grainger are all out through injury. Charlie Lee could be included in the squad while Alex Lawless is pushing for a starting berth. Daniel Happe, Matt Harrold, James Alabi are set to start on Saturday.

Last Time Out – 1-0 away defeat vs Boreham Wood 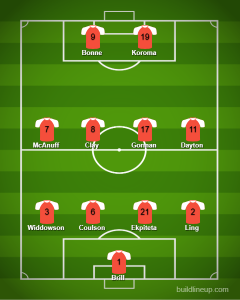