“It’s Going to be an Uphill Battle”

Maidstone United’s Head of Football John Still is under no illusion of the task he has taken on at the Gallagher Stadium. The 68 year old came out of retirement to return to the club he gain promotion with in 1989. The Stones head to league leaders Leyton Orient on Saturday and will be hoping to start the new era of with a result.

Still stepped down as Barnet manager in December but revealed the lure to return was too much. The former Dagenham man admitted to having many calls looking for his services but stated to maidstoneunited.co.uk “the role seemed the right one for me, the club is in a real difficult situation and it’s going to be an uphill battle. But it was the right time, right place, right job for me”.

The Stones head to Orient on the back of a 3-0 home defeat to Dagenham & Redbridge last weekend. Nathan Smith, Connor Wilkinson and Lamar Reynolds all struck to inflict a eighth defeat in their last ten league games. Simon Walton who was in temporary charge admitted to maidstoneunited.co.uk “it was probably one of the best games we’ve played this season to be perfectly honest”. The Stones missed a host of chances with Walton acknowledging the tough lesson his side would have learnt, “you get what you deserve unfortunately in football, if you don’t take your chances and let top strikers who cost a lot of money have chances, what are you going to get?

Still has brought former Braintree manager Hakan Hayrettin as his first team coach to assist him. The pair worked together at Luton between 2013 and 2015 and Hakan admitted it was a tough decision to depart Braintree but is relishing the challenge, “I am really looking forward to it, I am happy I made the decision to be at one of the biggest non-league clubs”.

After a long period of success and stability with Jay Saunders in charge for seven years, Still is the third manager of the season at the Gallagher Stadium. Hayrettin highlighted that being six points from safety at the bottom of the league, securing their National League status for next season is their aim. Speaking to maidstoneunited.co.uk “we’ve got a talented squad, we’ve got to find the best way of getting it out and finding a structure of playing to get points. Success is measured in different ways, for us staying in this league is going to be our aim. Everything is going to be difficult but the challenge is the most important thing and we’ve got to rise to it”.

Despite having just 16 games left of the National League season to ensure their safety, Still feels that his side have to build a strong base and foundations in order to help them succeed. Still highlighted how important the next fortnight could be for his side speaking to kentonline.co.uk “We’re under no pressure and then we’ve got a cup game next week. We’ve got two weeks for me to try and work to give ourselves the rest of the games to do it”. He added “I’ve got to work work work to give ourselves a chance to be better for as many games as possible and I’m going to need that time to do a little bit of work on and off the pitch”

With just three league wins since the start of November it will be a tough task for Still and his team. Still’s biggest challenge is to rectify the problems on the pitch, speaking to maidstoneunited.co.uk “I want us to be hard working, hopefully exciting and hopefully winning. We are where we are for a reason and what we have to try and do is find out the reasons why it is happening and eradicate why it has happened”.

Simon Walton is set to continue after returning in the defeat to Dagenham while Jamie Philpot remains on trial and is looking to earn a deal. Jake Robinson and Elliott Romain look set to continue in attack while top scorer Blair Turgott is still out with injury.

The Six Meetings Between the Sides 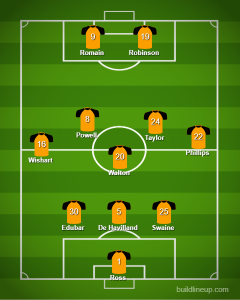