Leyton Orient head coach Justin Edinburgh is relishing the promotion battle at the top of the National League. The O’s head to Barrow tonight looking to take advantage of their game in hand on their promotion rivals ahead of their crunch clash with leaders Wrexham on Saturday.

Edinburgh is in his second season at the Breyer Group Stadium and at this time last year the season has ended after defeat away at Gateshead in the FA Trophy. With both the league and trophy in their grasps the 43 year old wants his side to enjoy their journey. Speaking ahead of their trip to Barrow to leytonorient.com “let’s enjoy the ride, I’d rather be in the position we are in now than waiting for the season to finish. There is so much to play for, we’re really excited for the next two months of the season”. 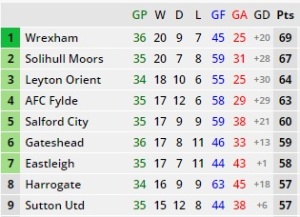 Tight at the Top

The O’s made it back to back wins after a 2-1 victory at Havant & Waterlooville on Saturday. Josh Coulson’s header sealed their first away league victory since November after Jordan Maguire-Drew’s strike was cancelled out by Alfie Rutherford. Edinburgh was relieved to see three points again, speaking to leytonorient.com “it was needed to get back to winning ways in the league. It was a tough place to come and a hard fought victory. It was a valuable three points today and one we’re delighted for”.

Edinburgh started with a back three for only the second time this season at Havant & Waterlooville with the return for Marvin Ekpiteta and Josh Coulson. The O’s struggled with a back three earlier in the season but the former Newport manager like the change of system. Speaking to leytonorient.com “we needed to get our best players in the team, three center backs are all back, Josh and Marv are now fit while Dan Happe’s been immense since he’s come in, there was no chance I was leaving him out. I thought we looked good for periods today, I liked the shape we won the game and I liked what I saw”

Midfielder Jordan Maguire-Drew continued his recent good from grabbing his second goal for the club. The 21 year old was played in a more central role at Havant and is starting to have an impact on games. Speaking to leytonorient.com “I am just starting to find my feet and show the fans what I can do. I want to keep this spot and we want to start a winning run now and hopefully we can take that into Tuesday against Barrow and go from there”.

The O’s had to battle to grab the three points on Saturday and Maguire-Drew highlights his side will have to do the ugly side of the game to maintain their challenge at the top of the table. Speaking to leytonorient.com “at times we do have to scrap and we do have to fight because it’s not always going to be pretty football. We just wanted to get three points and get back on the road on Tuesday and do the same”.

It is a crucial week for Orient who with a win tonight can go within two points of leaders Wrexham ahead of their televised clash on Saturday. After leading the league for three months of the season, the O’s are now the chasers but Edinburgh explains they can only affect what they do. Speaking to leytonorient.com “I have always said, as long as it is our own hands that’s all we can do. What anyone else does, we can’t affect. All we can affect is us, today was the most important one, we won that, the attention on focus goes to Barrow”.

Tuesday’s trip to Barrow is the first of five midweek fixtures before the end of the season but with consecutive victories, Maguire-Drew is hoping having a busy fixture list can help his side. Speaking to leytonorient.com “when games come thick and fast and we’re notching up the wins, it becomes a habit and that’s what we want”. He added “we have a lot of games in a short space of time so if we can keep that winning mentality and keep being positive with each other and getting positive outcomes, everyone is going to be happy”. 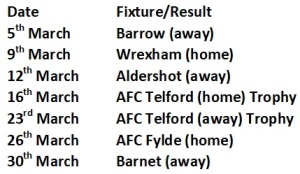 Defender Myles Judd is out with a hamstring injury while Josh Koroma is still returning from injury. Edinburgh could name an unchanged side for the trip to Barrow but Matt Harrold is pushing for a start. Winger James Dayton could return to the squad after recovering from injury.

The Last Eight Meetings Between Sides 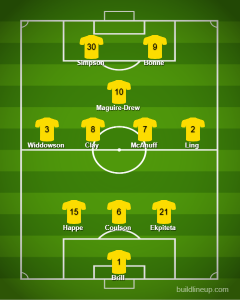