“We Need Everything We Have To Get a Result”

Aldershot manager Gary Waddock is relishing the visit of league leaders Leyton Orient on Tuesday night. The Shots sit seven points from safety at the bottom of the National League and Waddock is hoping his side can raise their game ahead of the visit of the O’s. Speaking to theshots.co.uk “we are going into a great game Tuesday night against a team sitting top of the table and it’s one we are looking forward to. We need everything we have to get a result”.

The Shots fell to back to back defeats with a 2-1 loss at Barrow on Saturday. Dior Angus put Barrow ahead before Adam McDonnell levelled looking to have earnt a point before a stoppage time penalty from John Rooney snatched the points away from Aldershot. Waddock stated to shots.co.uk “we’re fighting for our lives, you can absolutely see that in the way the players approached the game. Decisions changes to course of the games and so do chances”.

Aldershot conceded two second half penalties which Waddock decided not to comment on post match. The Shots called upon Matt Cole to save the first before Rooney dispatched the second in added time. Waddock stated to theshots.co.uk “all the planning and preparation that has gone into all of our fixtures. The players equipped themselves extremely well, we put a game plan in place. Everyone to a man executed it extremely well but we can only control we you can control”.

Aldershot face a fight to stay in the division while Orient are fighting to leave the division. Following the weekend’s results, both sides head into the clash in contrasting moods but Waddock is hoping his side can build on their performance at Barrow. Speaking to theshots.co.uk “from their side they got a big result against a team who are in and around them looking for promotion and they went top, a massive boost. From our side, it was very upsetting, disappointing and frustrating. The manner in how we played was very encouraging. There are different emotions for both clubs and we are really looking forward to it”.

Waddock’s men earned a draw against the O’s back in November and the former Wycombe man revealed he may be considering using the same formation. In similar circumstances, Orient headed into the game beating Wrexham while Aldershot lost to Barrow. Speaking to theshots.co.uk “when we went there, we played well on the evening, our formation and set up was right especially against a team like Orient with the personnel they’ve got. It was an encouraging formation, I will have a look at it again today and possibly go with it again”. 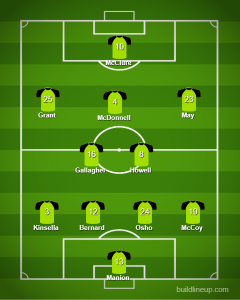 Aldershot formation at Orient back in November

Points will be the top of Waddock’s agenda against the O’s but it is a tough week for the Shots who host Salford on Saturday. With just ten games the 46 year old knows that his side face a battle to stay in the division but has urged the supporters to create a positive mood ahead of the visit of Orient. Speaking to theshots.co.uk “there has to be a positive vibe around the place, we are trying to fight and scrap, we saw it on Saturday. A group of players trying their best on Saturday. We’re up against a very good Orient team on Tuesday night. Would be nice if we can be more vocal than them, they will have a good following”.

George Fowler, Lewis Kinsella and James Rowe all remain sidelined with injury. Scott Rendell should return the squad after serving the second game of his suspension on Saturday. Reece Grant and Will Manion could return after sitting out the defeat at Barrow.

The Last Seven Meetings Between the Sides