“We Need to Get the Next Three Points, That’s All that Matters”

Leyton Orient assistant coach Ross Embleton is solely concentrating on the visit of Harrogate Town on Good Friday. The O’s sit two points clear at the top of the National League and face title rivals Solihull Moors on Easter Monday but Embleton only concern is Harrogate. Speaking to O’s Show “we need to get the Harrogate game done first, we need to get the next three points, that’s all the matters. We aim to get nine points from nine, and we start with the first one”.

The O’s made it back to back wins last weekend with a 2-1 victory at Sutton United. Orient had to fight back after Jonah Ayunga strike put the U’s ahead, Dan Happe headed the equaliser before substitute James Dayton was sent off. MacAuley Bonne struck from the spot in the 89th minute to earn victory. Head coach Justin Ednburgh praised Bonne for the winner it what he described as a “bizarre game”. Speaking to leytonorient.com “when we needed someone with nerves of steel, Maculey produced that. It is probably not our best performance at this stage of the season, it’s all about the result and we got three valuable points today”.

It was the third game in succession, Orient fell behind but once again responded earning victory. The O’s struggled to create the opening period at Sutton with Bonne revealing his side got a rocketing at half time from Edinburgh and it paid off. Speaking to leytonorient.com “we needed to step it up, we weren’t at the races in the first half. We needed a rifling at half time, every team does when they perform like that, it wasn’t good enough. It paid off what he said in there and seemed to work for us in second half”.

The O’s have now taken 15 points from losing positions in league games after the win at Sutton. Striker Matt Harrold highlighted the whole squad is together and are only concerned about one objective. With injuries continuing to hit Orient hard, Harrold knows that the competition for places in the squad is ensuring everyone remains in form. Speaking to East London Advertiser “everyone has had an impact from the bench because there has been no passengers this season. We have pushed each other every day in training and the result is late goals and it showed spirit”.

With just three games to go, the job remains simple for Orient, win their last three games and they are promoted. The O’s hold a two point lead over Salford ahead of the Good Friday fixtures and goalkeeper Dean Brill is aware of what is at stake. Speaking to Nationalleague.org “it’s a mini league now and we know what we have got to do. There’s a massive desire here to get the job done. We’ve been top for so long this season and now we’re desperate to get over the line”.

Brill has played every minute since Justin Edinburgh’s arrival at the Orient back in November 2017. The 33 year old is embracing his sides position at the top of the league and highlights that these are the moments you are in football for. Speaking to Nationalleague.org “it’s a good place to be in, you’ve got to try and enjoy it, this is the fun bit. It’s not nerves, it’s excitement. As you get older you tend to be a bit more measured about this type of situation, It’s a really big and exciting Easter weekend”.

Harrogate arrive in E10 still needing four points to guarantee their play off place. Orient beat Town back in September when the sides were in the top two. Embleton revealed he is surprised at Harrogate’s position in the table and knows that they will be a test for Orient. Speaking to O’s Show “they have still got bundles to play for. They will come and make it difficult for us, everyone seems to want to stop us winning the league. They will be an incredible atmosphere and we know it’s going to be a massive game”.

Captain Jobi McAnuff and Jamie Turley should  be back available after missing the past few weeks with injury. Myles Judd remains out while James Dayton is starting his rehab for his broken ankle. Matt Harrold is pushing for a start after another impressive substitute appearance at Sutton last week. 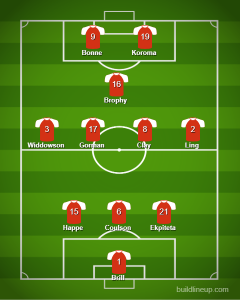