Salford City manager Graham Alexander has called on improvement in his sides play ahead of their meeting against Leyton Orient. The Ammies have drawn the last three games and Alexander wants his side to maintain their standard throughout the 90 minutes. Speaking to salfordcityfc.co.uk “first of all we need to see an improvement in aspects of our play. We’ve had good spells in all of our games on and off the ball and bad spells in all of our games. We need to get some consistency to get the results we want”.

City head into the clash with the O’s on the back of a 2-2 draw away at Carlisle last Saturday. Olufela Olmola put Carlisle ahead before the Amnies fired back through Emmanuel Dieseruvwe and Danny Whitehead. However a Stefan Scougall goal just before the break saw the game end in a draw. Alexander stated to salfordcityfc.co.uk “it was a difficult game for us over the 95 minutes, see tiredness from the week we had. They worked exceptionally hard against Plymouth. We know what their bodies have been put through. They stood up and were counted”

The Ammies fell behind early on at Brunton Park but Alexander praised his sides fightback in the game which saw them score two goals in five minutes to go ahead. However the 47 year old bemoaned his sides game management heading into half time, speaking to salfordcityfc.co.uk “we scored two goals again away from home which is excellent. But the frustration and disappointment is conceding just before half time. It’s not the first time we have conceded just before. We have seen how important it is this week. We could have had maximum points had it been for game management”.

Salford followed Orient up through the play offs last season and Alexander is expecting another intriguing contest between the sides. The former Burnley defender revealed he thought about former Orient boss Justin Edinburgh on the opening day of the season and understands they may be some emotion on Saturday. Speaking to salfordcityfc.co.uk “there was a great rivalry between the clubs last season and we pushed each other extremely hard to get promotion. In the end what happened to Justin after promotion was tragic. It will certainly be a part of on Saturday”.

Despite being one of the pre season favourites for the title in their first season in League Two; Salford have only won one of their opening five league games this season. Alexander is not concerned about the lack of wins and acknowledges it may take some time to adjust to life at this level. Speaking to salfordcityfc.co.uk “we have to adapt to a higher level. We still have to improve on performances. We saw last year, it took us a few games to get up to speed with what was required. We are getting there now and seen different challenges in each game”.

The O’s may have a slight advantage over all of the other League Two sides as they have faced Salford before. The Amnies beat the O’s back in January but Alexander feels that despite having the upper hand over them last year, it means nothing now. Speaking to salfordcityfc.co.uk “if you look back to the January game, the squads are roughly the same, both clubs showed confidence in their squads that were successful last season. We will have knowledge of their players and vice versa. It is about coming out on top and doing the basics well. What happened eight months ago won’t have any bearing on Saturday’s result”.

Captain Liam Hogan remains out through injury after an operation recently. Striker Rory Gaffney could be recalled having scored in both of last season clashes with Orient. Richie Towell sat out the draw at Carlisle and could be back involved at Moor Lane.

Alexander on his squad “we have got a couple of niggles. One or two have missed training. The usual bumps and bruises, by no means have we got a skeleton squad. We have enough players to put out a good team to produce and performance to win the game”. 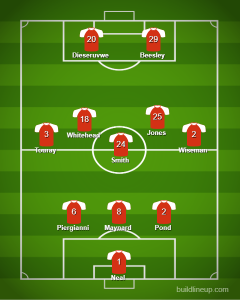