“We’ve Got to Get Our Own Performance Right”

Grimsby Town manager Michael Jolley wants a reaction from his side as they host Leyton Orient on Saturday. The Mariners have lost their last three games and Jolley knows his side need to improve to get back to winning ways. Speaking to Grimsby-townfc.co.uk “in the end it is really about us, we’ve got to get our own performance right. If we get to a good level then we give ourselves a chance to get something from the game”.

Grimsby head into the clash with Orient on the back of a 2-1 defeat away to Stevenage last weekend. Kurtis Guthrie and Charlie Carter put Boro ahead with Ahkeen Rose grabbing the consolation goal. Manager Jolley described the first half performance as the “worst of the season by a distance”. Speaking to Grimsby-townfc.co.uk “we were a long way below the standard set so far for this year. It wasn’t good enough”.

A worry for Jolley was the lack of aggression at Stevenage and admitted his side didn’t get to grips in the game. Both goals last weekend came from crosses into the box and the 42 year old highlighted his side have been working hard on the training ground this week. Speaking to Grimsby-townfc.co.uk “we need to bring the right energy to the game Saturday. We have been working on getting to the ball a little bit more aggressively, making sure opponents can’t put the ball into our box”.

Midfielder Harry Clifton returns to the squad after International duty last week and is expecting a response in front of their home crowd. The 21 year old has not started a game since September but is ready to take his chance when it comes. Speaking to Grimsby Telegraph “I’m sure there’ll be a reaction, I think we were well below par for our standards. It’s a home game and with crowd behind us, we’ll be looking for a reaction and try to turn it into a positive result this weekend”.

Captain James McKeown admitted his side want to be less inconsistent this season and highlights they need to bounce back. The 30 year old explained that his side need to build as a team with everyone playing their part. Speaking to Grimsby Telegraph “we’re not keeping ourselves in games for long enough, when you’re not scoring goals, people look at the strikers but at the end of the day we’re not getting goals  and not keeping clean sheets. It runs for everyone, whoever it may be, we need to do more as team”.

Saturday’s opponents Orient, recently named Carl Fletcher as their new head coach on Wednesday but the O’s revealed that assistant coach Ross Embleton would take charge of the game. Despite the new appointment Jolley isn’t expecting any surprises “you’re neve certain what the opponents are going to do. I wouldn’t imagine them to change dramatically for this game but we will have to wait and see about that”.

Despite the league positions between the sides, Jolley is expecting a tough challenge against the O’s. Orient have won back to back games and the 42 year old highlighted the job the club have done after an eventful summer. Speaking to Grimsby-townfc.co.uk “they have done well, they were in a very tough situation and as a football club they came through well. Now finding their feet and have had a couple of good results recently. They have some good attacking players, have good energy in midfield and overall are a good League Two team”.

Max Wright is out through injury but defender Ludvig Ohman could return to the squad after overcoming injury. Ahkeem Rose is pushing for a start after impressing off the bench at Stevenage. 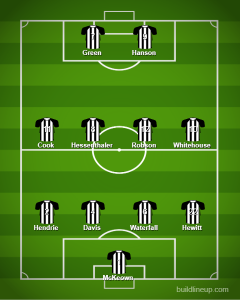