“We’re Not Going to Get an Easy Game This Year”

Macclesfield Town Head Coach Mark Kennedy is relishing their trip to Leyton Orient on Saturday. The Silkmen start a crunch week against fellow relegation rivals Orient before a trip to Morecambe on Tuesday and Kennedy acknowledges they will be tough games. Speaking to SilkmenTV “it will be a real good test, every game is tough, we’re not going to get an easy game this year, likewise whoever we play isn’t going to have an easy game either”

The Silkmen head to East London after a 1-0 home defeat to Norhampton last weekend. Callum Morton’s strike just before the hour mark inflicted Macclesfield second consecutive defeat. Kennedy stated to SilkmenTV “the overriding emotions at the end was disappointment in the result but I am really pleased with the effort and commitment from the team”.

Kennedy arrived at Moss Rose back in January after Daryl McMahon left as manager, looking to keep them up. The former Wolves man was pleased to have a free week on the training pitch ahead of their end of season run in. Speaking to SilkmenTV “it’s the firs time since I’ve been here we have had time on the grass and it’s been a real good week. As a new coach you want to implement your ideas on to the group. I have clear ideeas on what I want to do, the time has been valubale and it’s been a strong week”.

Saturday’s defeat was their consecutive game the Silkmen had conceded the first goal. Despite a victory against Forest Green, Kennedy’s men struggled to get back into the game against Northampton. The 43 year old stated to SilkmenTV “we reacted really well but why does it take conceding a goal to react. I can’t fault the effort or committment, drive and work ethic. We need to recognise the dark arts and what we’re up against”.

Macclesfield have had ongoing off field problems this season with player wages, managerial changes and a point deductions. Despite this, they still sit six points above the relegation zone and midfielder Connor Kirby highlights that everybody is fighting for the same end goal at the end of the season. Speaking to SilkmenTV “ there is a lot of togetherness in the group, been up and down all season. We keep getting pushed back for whatever reasons off the pitch but there is real togetherness and we’re all together. Everyone is committed to the game”.

Macclesfield beat the O’s back in August under Sol Campbell but Kennedy highlights that it will be a different test when they visit the O’s on Saturday. Orient sit six points above them with Kennedy stating to SilkmenTV “it will be a difficult game, their coming off a big performance against Stevenage. Their form has been good, they are a huge club for League two and are well supported. We are looking forward on imposing ourselves on the game and focusing on what we need to do”.

Shilow Tracey could make his debut after signing on loan from Tottenham Hostpur. Harry Hamblin is expected to retain his place in midfield while Theo Archibald could return from injury to be involved in the squad.

The Past Nine Meetings Between Sides 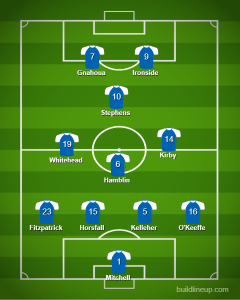