“We’re Talking About 1 or 2 Per Cent Improvements”

Braintree Assistant manager Barry Bolton has urged his side to be more clinical in front of goal ahead of table topping Orient visiting on Tuesday night. The Iron fell to their sixth defeat in their last eight games on Saturday and Bolton has highlighted extra improvement is needed. Speaking to braintreeandwithamtimes.co.uk “we’re talking about 1 or 2 per cent improvement in a couple of areas and then we’ll turn these results around”.

Blair Turgott’s injury time penalty inflicted another home defeat on Saturday however Bolton was left baffled to how his side failed to take a share of the spoils. Speaking to braintreetown.co.uk “I am speechless how we didn’t get something from the game is incredible and to lose again so deep into added time is an insult and added misery for everyone involved”.

Saturday’s 1-0 defeat was their third in their last four games with Bolton accepting it will be hard to lift the players but acknowledges it is a learning curve for them. Speaking to braintreeandwithamtimes.co.uk “I don’t think the results are reflecting the performances we’re putting in. It is really hard picking the boys up but we have learn, it’s a tough one to take but these are the things we have to live with” He added “we’re all really gutted, we’ll lick our wounds and we’ll try to work out how to get over the line”.

Braintree were promoted from National League South through the play offs last season but have struggled to adapt to life back in the league. One win in their opening 12 games is their worst start to a season these century. Bolton’s side are the league’s lowest scorers and admits that they need to start finishing off the chances they create, “every team will have decisions that go for them or have spells in a game, we have to make sure we take the pressure of our defence a bit more by converting some of the passages we are having” Braintreeandwithamtimes

It’s been a harsh reality check for the Iron who bounced back to the National League after one season away. The quality in the league is a step up from the South and Bolton highlights that not being clinical in front of goal is the difference. Speaking to braintreeandwithamtimes.co.uk “when we do get opportunities we need to convert them and that’s the difference. You give the opposition one chance to put the ball in the net and they are doing it, we seem to need two or three to get anything from game”.

Braintree manager Brad Quinton named an unchanged side at home to Maidstone on Saturday. Lyle Della-Verde will be hoping for a start coming off the bench in the last two games. Defender Michael Clark could face his old club. 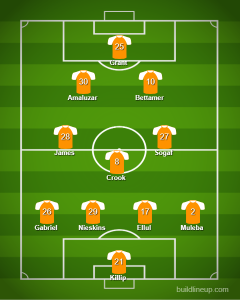