“Keep Enjoying but We Want More of It”

Leyton Orient first team development coach Danny Webb insists everybody must enjoy the feel good factor around the club but there is still a long way to go. Orient’s win at Braintree on Tuesday night saw them go 13 games unbeaten at the start of a season, a new record. Speaking to leytonorient.com ” we are a quarter of the way through it, I feel it is much better to be in this position  than chasing personally. The boys have done wonders to get into this position, the message is keep enjoying but we want more of it“

A Macauley Bonne hattrick and strikes from Josh Koroma and Marvin Ekpiteta saw the O’s pick up their third consecutive victory in a 5-1 victory at Braintree on Tuesday. Head coach Justin Edinburgh was thrilled his side were able to break the record and praised the professionalism of his side. Speaking to nationalleague.org “sometimes records get forgotten about but this is one I will always remember”. He added “I think this was a statement of intent. It’s brilliant we were very professional and the players were a credit to the club”.

Hat trick hero  Bonne went top of the National League scoring charts with his treble on Tuesday night. The former Colchester man was quick to point out that despite their unbeaten run, performance levels need to be maintained. Speaking to East London Advertiser “we set our standard to be winning games and playing well but I didn’t think anyone expected to go unbeaten for this long” He added “hopefully we can make this run last forever, but we need to just remember although it is good while it lasts, the main thing is keeping our standards high and winning games”.

The O’s have come a long way since Edinburgh’s appointment in November 2017 and Danny Webb highlights their strength at both ends of the pitch. Speaking to leytorient,com “in football, games are won and lost through mistakes in both boxes or not taking chances. At the moment we are clinical in front of goal and defending as team brilliantly”. With Orient yet to taste defeat, Webb illustrates that the way they play shouldn’t change if they are ahead or behind, “it is important if we are a goal up or down, we keep doing the same things, whatever happens, we do what we’re good at”.

Edinburgh picked up his first victory as head coach back in December but is aware that it will be another test for his side to overcome tomorrow. Speaking to East London Advertiser “we know it will be a very tough game. Sutton are a team of know – a team that knows how to win football matches. They have players who have had success, so we are fully aware if how tough it will be but we go in full of confidence”.

Orient have named the same starting 11 for the last nine games but Edinburgh has found the team selection even more difficult with the return to fitness of James Brophy and Sam Ling. Matt Harrold, Alex Lawless, Ling and Levi Lumenka all missed out on the squad at Braintree with Edinburgh highlighting that every player wants to be in the team. Speaking to leytonorient.com “they’re desperate, hungry and everyone has got the desire to be in the team. Competition is strong, players in the team know they need to be at their best to maintain their position”

James Brophy, James Alabi and Dale Gorman are all pushing for starts. Sam Ling is back fit after an ankle injury but George Elokobi is still regaining full fitness. 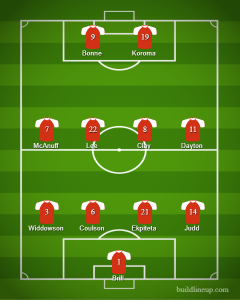