“We Will Not Be Taking Our Foot Off The Gas”

Leyton Orient midfielder Craig Clay insist there will be no let up from his side when they travel to Maidstone United in the 4th Qualifying Round of FA Cup today. Orient have only lost one of their 16 games so far this season and the former Motherwell man wants his side to carry their momentum in the cup. Speaking to East London Advertiser “We are going there to do a job, we will not be taking our foot off the gas and we will be professional about it and go there to win”.

Orient were unlucky not to take all three points when they drew 0-0 with Hartlepool last weekend. Joe Widdowson saw red in the second half but despite the numerical disadvantage the O’s went the closest to breaking the deadlock. Edinburgh stated to leytonorient.com “I’m very proud of the performance and the manner we played, even with 11 men. We moved the ball well at times against a team that again came to frustrate us. Even with 10 ten men, we looked like the team going to win the game”.

Edinburgh’s side picked up their first victory of the season at Maidstone back in August and they haven’t looked back since. However, since the victory, Harry Wheeler has replaced Jay Saunders as Maidstone boss and Edinburgh highlights it will be a different Stones team they encounter on Saturday. Speaking to East London Advertiser “they will probably have a point to prove with us goin there earlier in the season and winning. They have a new manager and I’m sure they have new ideas and have had a bit of a bounce”.

The O’s have struggled in the FA Cup in recent seasons, winning just one of their last six games in the competition. A win would see Orient progress to the First Round Proper with Edinburgh highlighting it is a nice challenge away from their league campaign. Speaking to the O’s Show “the players are really looking forward to it, for me it’s a competition with a huge amount of history and prestige. It is one as players and staff we want to have a good run in, we know the fans will. It is a game we’re wanting to win”.

Midfielder Craig Clay has been an ever present for the O’s this season, starting all 16 games so far. The 26 year old has never progressed past the second round of the FA Cup and is keen for Orient to have a good cup run. However, first and foremost for Clay is beating Maidstone. Speaking to East London Advertiser “it would be nice to on a little cup run and experience the magic of the cup. We have to worry about Maidstone first”

Edinburgh could make changes at Maidstone allowing some of his players to have some competitive football. But the former Newport man is aware that it is all about the right equilibrium at the Gallagher Stadium. Speaking to the O’s Show “the position I’m in is all about getting the balance right and making sure the team that goes is a team that can get us through to the next round. Also making sure the squad is utilised to the maximum”. 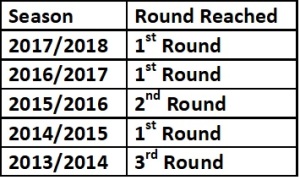 Round Reached by Orient in last five seasons

Defender Joe Widdowson will start his three match suspension after his red card against Hartlepool with Sam Ling expected to replace him. Charlie Lee is set to return after being rested last week while Dale Gorman returns after International Duty with Northern Ireland U21’s. On loan winger Levi Lumenka is unable to play after permission from Crystal Palace was denied. 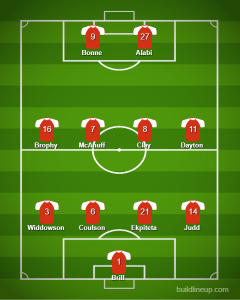