“Havant are Coming and are Looking for a Response”

Leyton Orient head coach Justin Edinburgh is fully aware that Havant & Waterlooville will have a point to prove at the Breyer Group Stadium this weekend. The Hawks lost to Metropolitan Police in the FA Cup Fourth Qualifying Round last weekend and will be looking for a reaction. Speaking to leytonorient.com Edinburgh stated “Havant are coming and looking for a response. The manager questioned the players for their performance and result, we know they are coming to put a performance on and try and get a result”.

Orient themselves lost 2-0 at Maidstone in the FA Cup with second half strikes from Blair Turgott and Elliott Romain inflicting defeat. The O’s dominated possession for large spells but conceded twice in the second half with no response. Edinburgh stated to leytonorient.com “it’s not what we’re about, the disappointing thing was the manner of the goals and the reaction when we went 1-0 down. We became very erratic and that would be the disappointment“.

With just one win in their last four games, Orient will be looking for a reaction in front of their home crowd. Midfielder Craig Clay sat out the defeat at Maidstone and highlighted that his side are ready to hit their early season form again. Speaking to East London Advertiser “we have set our standards at the start of the season. We have set the bar high and had a great start to the season. I am sure we will be working on stuff and trying to make ourselves better but we have started well and want to keep this feel good factor”.

The O’s have failed to score in three of their last four games and despite Havant sitting three points from safety and winless in their last eight, they won’t be any pushovers. Speaking to leytonorient.com Edinburgh stated “whatever team you come up against, it is always going to be a difficult encounter. There are always difficulties in games. Their league position is a low one, if you look at all their results they have only been by the odd goal. We have to be at our best and we will try to get back to winning ways”.

Edinburgh made six changes to his side at Maidstone and also trialled from the start a 3-5-2 formation. It is expected that Orient returned to a more recognised 4-4-2 against Havant with Edinburgh stating to leytonorient.com “we made changes last week, it was the right decision, players in the squad need to play some games. We look forward now and look what brought us success and where we can hurt Havant. I always pick a team I feel can win the game”.

After their defeat in the cup, Orient’s full attention is on their league campaign and know every result can be key with just one point separating the top four. With three games in eight days, midfielder Charlie Lee points out that his side must be persistent in their search for a return to the Football League. Speaking to leytonorient.com “we must keep focus on the league now, the result wasn’t ideal. We have got to take the positives and look for a reaction on Saturday”

Joe Widdowson remains suspended after his red card  against Hartlepool. Midfielders Craig Clay and Jobi McAnuff are expected to return to the side after dropping to the bench at Maidstone. Sam Ling is expected to start at left back while Josh Koroma is likely to partner Macauley Bonne in attack.

Last Time Out – 2-0 loss at Maidstone 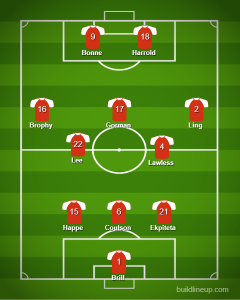