Leyton Orient defender Joe Widdowson insists his side will be raring to go against promotion rivals Salford arrive today. The full back has been a constant in the joint best National League defence and is looking forward to the battle ahead of his side. Speaking to East London Advertiser “this is the type of game we need to relish and enjoy. We want to test ourselves against the teams near the top and that is rightly where we should be”.

The O’s moved four points clear at the top of the National League after their 1-0 victory over Dagenham & Redbridge on New Year’s Day. Macauley Bonne struck his 18th of the season in the first half to secure victory. Head coach Justin Edinburgh was delighted how his side started the new year stating to leytonorient.com “it was a solid performance, a good clean sheet and a very valuable three points to take into the new year”.

Orient should have made it more comfortable against Dagenham with chances wasted in the second half. However with the return from injury from captain Jobi McAnuff the O’s look back to their threatening best going forward which delighted Edinburgh. Speaking to leytonorient.com “there could have been other opportunities where we didn’t capitalize on in the second half. The intent was there, the opportunities were there which was good. We created today, perhaps we might have been lacking in the last couple of games. We looked nearer to our best”

Saturday’s clash with Salford pits 1st vs 3rd at the Breyer Group Stadium and Edinburgh is aware that being top of the league they are the team everyone wants to catch. The O’s have been top since November and the former Newport man feels his side are dealing with the test. Speaking to East London Advertiser “this is the new challenge, we are top of the league and people want to come and beat you. People want to raise their game against you but I think the players have embraced the challenge and are doing very well with it”.

Orient travelled to Salford back on the opening day where either side could have left with three points on another day. Widdowson is aware that it is a massive game at the sold out Breyer Group Stadium and the Amnies will pose problems for his side on Saturday. Speaking to East London Advertiser “it is a big game for us and a big test and we will be desperate to try and beat them here at home”. He added “they have some very good individuals, they are a good side and to be honest they are one of, if not the best side we’ve played this season”.

With the O’s top of the league and Salford needing the points to catch Orient, Salford are expected to take the game to Justin Edinburgh’s men. Widdowson highlights the importance of maintaining focus on what his side are doing and not becoming worried about how their rivals are getting on. Speaking to leytonorient.com “we need to keep doing what we have been doing and get obsessed with other results. We are top of the league we need to make sure we keep winning games and putting points on the board. We will keep ticking the games off with wins and draws”.

Captain Jobi McAnuff is set to continue after recovering from a broken toe while midfielder Craig Clay could return after missing the last two games with a dead leg. Alex Lawless is pushing for a starting place after impressing in recent weeks while new signing Jordan Maquire-Drew is available after joining from Brighton in midweek.

Head to Head – One previous meeting 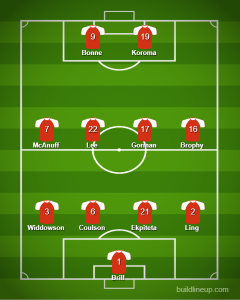