“It Gives Us A Chance to Experiment”

Wrexham manager Graham Barrow feels Saturday’s FA Trophy game is the perfect opportunity to trial a different way of playing with his side. The Dragons head into the clash on the back of three defeats on the spin and the 64 year old is keen to find a different way of playing. Speaking to wrexhamafc.co.uk “it gives us a chance to experiment, we’ve got to come up with a plan B, we haven’t had one all season. Once our starting system doesn’t work, we have to try and find that plan B”.

Barrow’s men fell to their third defeat in a row with a 2-0 away defeat to Bromley on Tuesday night. First half goals from Marc Anthony Okoye and George Porter inflicted defeat for the Dragons and saw them drop to fourth. Defender James Jennings was disappointed with his side performance stating to wrexhamafc.co.uk “I think we were off the races from start to finish. The first ten minutes I thought we started well but we didn’t penetrate or hurt them then we allowed them in the game. We switched off twice and got punished for them”.

Tuesday’s defeat was a missed opportunity for them to close the gap at the top of the table to just two points. Jennings admitted it was a blow for his side and acknowledged it was important for his side to show character on Saturday. Speaking to wrexhamafc.co.uk “we put ourselves in a good position at the back end of Christmas, we’ve got ourselves into a little rut now. It’s time to stand up and be counted. We’ve got FA Trophy Saturday, a break from the league, we can get back onto the training ground and do some work”.

Wrexham have had a busy January already making five signings including two strikers in Jason Oswell and Cole Stockton. Manager Barrow is hoping the pair can help solve the goal shy Dragons, he highlighted the need for more goals in his side admitting to wrexhamafc.co.uk “we put a lot of pressure on our defense all season by not scoring enough goals. Then when we do concede it becomes an uphill battle. We have got to find a way to score more goals”

The Dragons haven’t lost four in a row since December 2016, Jennings alongside his manager think going back to basics could be the answer to bouncing back against Orient. The 31 year old stated to wrexhamafc.co.uk “we need to go back to basics, I don’t know if we have kind of lost our identity a little bit. There were a few spells today where we didn’t know whether to come short or go long. It’s only down to the 11 players on the pitch, the decision making was not quite there”.

The Dragons haven’t gone further than the second round since 2015 and despite admitting to changes, Barrow is still going full on to win the game. Barrow was Sam Ricketts assistant when the O’s beat Wrexham back in November and will be looking for revenge on Saturday. Speaking to leaderlive.co.uk “it would be nice to win the game, that it is the key to it. It is an opportunity because it is the next game and we have lost three games, we have to do something about what happened at Bromley”. He added “whilst we are trying to win Saturday, it is a perfect opportunity with our league position to try and find a system that can rejuvenate one or two people”.

Manny Smith and Doug Tharme remain out injured. Recent signings Cole Stockton and Jason Oswell are set to make their first start at the Racecourse alongside Bobby Grant. New signing Kieran Kennedy should be involve after joining from Macclesfield while Brad Walker has returned to the club but is set to miss the visit of Orient. 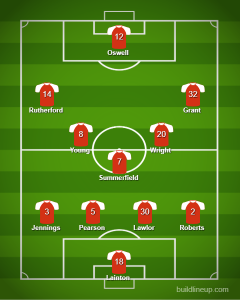